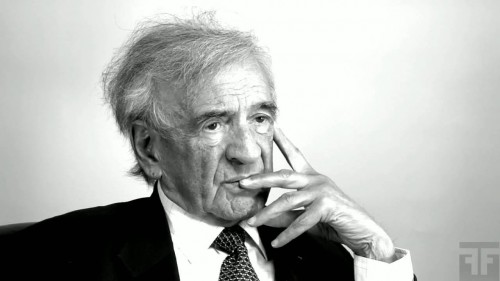 As a Jew growing up in this country, the shadow of the holocaust was omnipresent throughout my childhood. And yet, at least for me, while I had long been exposed to the horrors and atrocities of Nazi Germany, it was not until I did a more sophisticated inquiry in a history class in Israel, toward the end of my time in high school, that the brutal reality hit home.

Part of that re-education involved reading Elie Wiesel’s Night.  For me it was a book I could not put down and I finished it in a quick afternoon read that seared its images and thoughts into my brain forever.

For many, the holocaust is more than just something that happened in history, more than something that is increasingly in history’s rear view mirror, it is a question that sears itself into our existential questions regarding faith in God and, indeed, humanity.

As the New York Times noted in Mr. Wiesel’s obituary after his passing last week, “He wrote of how he had been plagued by guilt for having survived while millions died, and tormented by doubts about a God who would allow such slaughter.”

The Times continued that Mr. Wiesel’s books deal with profound questions that resonate from the holocaust: “What is the sense of living in a universe that tolerates unimaginable cruelty? How could the world have been mute? How can one go on believing?”

These are questions asked, but rarely answered.  But the Times also noted that the book “Night” was not an immediate success.  “The Holocaust was not something people wanted to know about in those days,” Mr. Wiesel told Time Magazine in 1985.  The mood only shifted with the trial of Adolf Eichmann in 1960.

For me, the most troubling aspect of many troubling aspects of the holocaust was the inaction of the world to stop it.  The turning back of the refugees on the St. Louis, the rise of anti-Semitism, not only in Germany but elsewhere, and books like Hitler’s Willing Executioners, which told the tale of extensive involvement in the extermination of European Jews by ordinary people, hit at the very core of our place in a free society.

The Times described a young Elie Wiesel, in the days after the liberation of Buchenwald, who vowed to “bear witness” but also decided he would wait for 10 years to write of his experiences.  “I didn’t want to use the wrong words,” he once explained.

The number of people who can bear immediate witness to the holocaust 71 years after the end of the holocaust is shrinking.  We are running out of eloquent spokespeople.  I fear for what that will mean for the future of our world.

As a young man, the holocaust, though it occurred nearly 30 years before my birth, played a profound role in shaping the kind of person I would become.  I took to heart the mantra, never again.  But, more importantly, I took to heart the notion that I too needed to bear witness.

In my writings on the Vanguard, I have vowed to speak for those who have no voice.  To bear witness to the atrocities and injustices that they suffer.

I have often been asked why certain issues such as race have such a profound bearing on my writings.  My interest in social justice, in speaking out for the oppressed and the underdog, comes from the lessons I personally took from the holocaust.

The words of Elie Wiesel played a profound role in that education process.  And, while his voice speaks no more in this world, it our job to teach the future generations of the work of Elie Wiesel and so many others, so that we too can bear witness to the ultimate atrocities that humans can visit upon each other – and so that we too can embody the spirit of “Never Again.”

I take solace in one thing, Elie Wiesel lived a full life, for 71 years after the liberation of the camp.  It was the goal of Hitler to exterminate Jews from the face of the world, but the Jews had a Yiddish slogan of defiance – “Mir velen zei iberleben” (We shall outlive them).

Share:
Tags:Anti-SemitismEli WieselHolocaustRacism
Previous : Will ‘Independence’ from PG&E Bring Cleaner and Cheaper Electricity?
Next : Monday Morning Thoughts: Did the School Board Shoot Too Low?