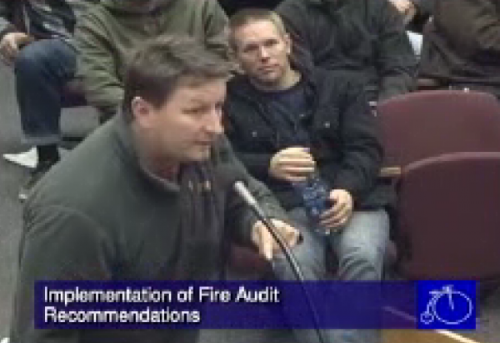 One of the most interesting backstories of the city in the last year or so is that the firefighters’ union president, Bobby Weist, once the most powerful single figure in the city, has increasingly lost whatever influence he once had in city governance.  Even those who were bound to give him the benefit of the doubt have reportedly lost patience.

The lawsuit recently filed is only the latest and most notable incident. Of course it wasn’t always like this – at one point, Bobby Weist was the most powerful figure in city government.  The Vanguard, over its ten years, has spent much time chronicling and exposing the power and excesses of Mr. Weist.

How powerful was Mr. Weist?  In 2009, he convinced three councilmembers to vote not to read a report by an independent investigator into excesses by Mr. Weist and the Davis Fire Department, which first came to light in the 2008 Yolo County Grand Jury report.

It would take five years and multiple lawsuits before the Davis Vanguard and Attorney Paul Boylan brought forward the full report to the public which, as it turns out, highlighted the favoritism that allowed Mr. Weist to ascend to Captain even though he was less qualified than most, which allowed for a climate of intimidation and harassment of those who spoke out against the union.

It was the Vanguard which pushed back against these excesses, and a council, now free of union influences that had purchased a council from 2002 to 2010 that was beholden to it.  By 2013, with a new council, new city manager, and interim fire chief in place, the city began to reform the fire department – holding the line on salaries, reducing personnel and threatening the very power of Mr. Weist through a shared management agreement with UC Davis.

The firefighters did everything in their power to resist – holding protests, walking precincts, holding no confidence votes, and even doing work slowdowns.  But council was able to get through the reforms, sometimes on narrow 3-2 votes in the face of public pushback from key local elected officials.

This is the backdrop for what would happen in the spring of 2013.  Ironically, were it not for the fact that Mr. Weist took his grievance to PERB (Public Employment Relations Board), we would not know the depths of his insolence.

The city writes that the sequence of events was that, on the morning of March 13, Captain Weist would “loudly and publicly” complain in front of his crew about this “bullshit training.”  He proclaimed that “the City would have to buy him and his firefighters dinner as the training was in the evening.”

Division Chief Shawn Kinney, in the mid-afternoon, noted that there “was a request from Captain Weist for vacation leave that same day, with a start time beginning when Weist’s engine company was to be preparing for that night’s drill.  This was the very first time Division Chief Kinney had any information to suggest that Captain Weist did not intend to go to the training scheduled for himself and his crew.”

Division Chief Kinney and Interim Fire Chief Steve Pierce discussed the matter, including the necessity of the training and the value to the firefighters, “and how difficult it would be to obtain substitute training.”  They determined, based on MOU provisions, that Mr. Weist’s “last-minute vacation request was in conflict with this important training (and) could be denied.”

Upon learning of this denial, “Weist became very angry and immediately advised Division Chief Kinney that he would be going home ‘sick.’  Captain Weist left work, and his engine company attended and completed the scheduled training under the supervision of an alternate captain assigned to them (as an overtime assignment) for the event.”

Mr. Weist had a long history of failing to get his unit sufficient training hours, but the leadership at the DFD never enforced the rules.  This is quite ironic because he has attempted to argue that, under the current system, training standards have declined.

This is, in fact, not the first time such a problem has been noted.  The fire audit noted that his shift rarely hit its training hours and he failed to file reports in a complete and prompt matter.

In the memo it stated that he would receive written evaluations monthly for the next six months.

Division Chief Fry wrote, “You have over 28 years of fire experience.  It is expected the quality of your work will reflect that experience.” It adds, “Failure to meet standards during the remainder of the 1 year period will result in a recommendation for discipline.”

Mr. Weist complains that the City “refuses to provide Captain Weist an opportunity to appeal the PIP”  and that “it has never been the practice in the Department to impose PIPs.”  He argues that the PIP (performance improvement plan)  is subject to a meet and confer with the PFFA (Professional Fire Fighters Association).

Mr. Weist argues, “The actions of the City, in issuing Captain Weist a PIP threatening discipline and arbitrarily denying his vacation leave contrary to past practice, is a blatant retaliatory measure against Captain Weist for his union activity.  The City’s actions create an environment hostile to the union and its rights.”

PERB ultimately agreed that the PIP violated the MOU in that “there is no provision in the MOU that gives the City discretion to impose a new evaluation tool without bargaining with Local 3494. The MOU makes no provision for PIPs or even evaluations.”

At the same time, they rejected the notion that this was done in retaliation for Mr. Weist’s opposition to the city’s reforms of the fire department.

PERB ruled, “We find that the City has proven its affirmative defense that it would have issued the PIP for a legitimate, non-discriminatory reason even absent Weist’s protected activity. PERB has held that an employer proves its affirmative defense when it demonstrates that it has ‘both an alternative non-discriminatory reason for its challenged action, and that the challenged action would have occurred regardless of the employee’s protected activity.’”

They wrote, “The City has met its burden because of its legitimate and substantial concern that one of its fire chiefs who supervised a crew of six firefighters was significantly deficient in training hours as established by an objectively reasonable and generally applicable policy; was not timely completing logs and reports on station maintenance, incidents, and apparatus checkouts; and was not timely performing quarterly fire prevention inspections. The City has therefore met or exceeded Local 3494’s prima facie case with equally or more persuasive affirmative evidence demonstrating that it would have taken the same action despite Weist’s protected activity.”

In other words, PERB agreed with the city that there was both legitimate and substantial concern that Mr. Weist supervised a crew of six firefighters that was SIGNIFICANTLY DEFICIENT in training hours.

For all of the touting of the great service that the Davis firefighters provide to the community, I find this fact appalling and I still question how much Mr. Weist’s refusal to sufficiently train his crew has put citizens at risk.

In previous articles we noted just how much below the other units Mr. Weist was in training.

But, more pointedly, shouldn’t Mr. Weist be embarrassed by his conduct?  Basically he was angry that he had to do training, he tried to get out of it by filing for same-day vacation time and, when he was denied it, he pitched a fit and took sick leave to avoid doing training.

And when he didn’t get the results he wanted, he filed a complaint with PERB, who really twice denied him his main point.

Don’t the citizens of Davis deserve better than this display?  And now he’s suing on a charge of overtime – the irony was that, a few years ago, they complained they were getting too much overtime, and now they are making a capricious claim to working more than 40 hours a week without receiving overtime premiums?

What the heck?  The firefighters run on 24-hour shifts.  The only way they could avoid working more than 40 hours a week is by working less than two shifts a week.  These are not hourly employees.  It boggles the mind that they get overtime to begin with.

It is time for Mr. Weist to go.  Finally, I think the entire city hall understands that.  But unless they are willing to fire him, this drama will continue.