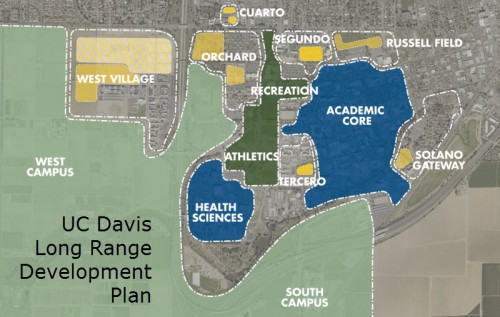 Those who are supportive of a General Plan update need to understand where this process is most likely to fall apart. Yesterday’s Sunday Commentary asked five specific questions, but the only question that drew any discussion was the one that directed people to select four places where you would support new housing opportunities for students, not including the UC Davis campus.

I actually think my position is fairly middle of the road on this issue.  I agree with the need for UC Davis to provide more housing on campus.  But I also think the city needs some housing in the city as well.

We start with math.  It is hard to calculate exactly what the city needs to build today, with no additional students admitted to UC Davis.  We know that the vacancy rate is effectively zero and we know there are a number of students already forced to commute into town.

A chart posted by Don Shor suggests as many as 10,000 students, graduate students and employees live outside of Davis, compared with 24,000 in Davis, 6000 on campus and 1455 at West Village.  Ten percent of students commute from outside of Davis.  It seems logical based on those numbers that we should probably be providing 3000 additional housing units, or perhaps beds, without any new population.

But that’s not the end of the story.  UC Davis is projecting somewhere around 6000 new students, with perhaps as many as 2000 more faculty and staff in the next decade.

The good news is that UC Davis has promised preliminarily in a document that has yet to be approved by the Regents to accommodate 90 percent of those new students.  That means 5400 of the 6000.  That means another 600 or so won’t be accommodated.  It also doesn’t include that faculty and staff number.

How likely is it that UC Davis will build for 5400 new students over the next ten years?  Eileen Samitz’s research that goes back nearly 30 years shows that both times UC Davis promised to increase their on-campus housing, their actual housing fell well short of their promises.

There is also a timeline here.  UC Davis has announced this month they will provide about 50 more houses to faculty and staff by 2018 at West Village.  That’s barely a drop in the bucket and it represents what they can reasonably accomplish in two years.

Even if they plan for and start building new student housing, it figures it would take them perhaps until 2020 before those student housing units are online, and by that point we may have another 3000 students on campus.

That doesn’t even begin to count on delays.  We saw how long it took West Village to go from planning stages to actually housing people and, even now, nearly a decade later, we still have yet to see full build out.  Student protests led to the postponed densification of Solano Park and Orchard Park.

Now UC Davis has looked toward the sports fields on Russell Boulevard as a possible location for student housing, but we see pushback from the neighbors against the three-story student apartments.

Bottom line, I have long been an advocate for UC Davis to do its share in providing housing for students on campus.  But they have always fallen short of even their modest commitments.

I think it is reasonable to expect that UC Davis will provide half of what they have promised in the next decade.  That puts them at 3000 new housing units, or at least beds.  I think, given current needs and future projection, the city should attempt to develop another 3000 to 4000 beds.

A lot of that could be subsumed in existing planned developments. At some point everyone expects Nishi to come back for another bite of the apple.  The Vanguard has suggested that the project could be modified to take on a lot more student housing, which would put the students right next door to campus and actually alleviate rather than exacerbate traffic.

Unfortunately, while everyone seems to understand that there is a student housing crisis, the community is divided on how to resolve it.  Failure to resolve the housing issue is only going to hurt our community – it will force more students to commute which means more traffic and greenhouse gas impacts.  It will force more students into existing facilities, which will have negative impacts on parking, on noise, on the availability of single-family homes.

I am not proposing that the city “solve” the problem here.  All I suggest is that the city provide some of the already-needed housing.  But if we can’t even get people to theoretically come up with acceptable locations in the city for housing, this is an impossible task and the General Plan will be a failure before it even begins.