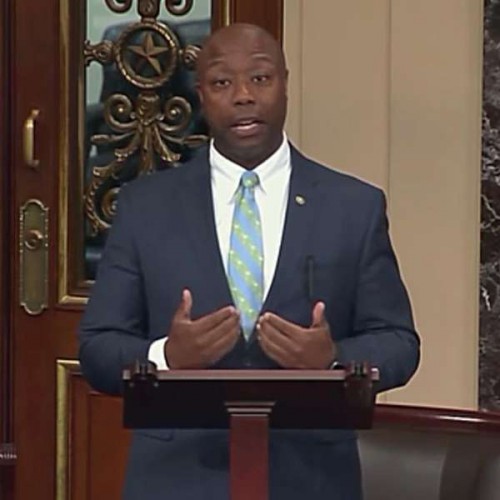 There are those who have dismissed claims of disparate treatment of blacks by the police, arguing that this is largely an election year ploy to curry favor by Democrats.  That of course ignores the fact that, until the last two years or so, Democrats have largely ignored issues of racial profiling.

That said, it will be much harder for those defenders of the police to dismiss the claims of South Carolina Senator Tim Scott – who currently is the only black Republican Senator.

During a remarkably personal address on Wednesday, he spoke about the fact that, during the course of his first year in office, he had been stopped seven times by police and, during another incident, the Capitol Police demanded he show his ID because his US Senator Pin was not enough.

“This speech is perhaps the most difficult, because it’s the most personal,” Senator Scott said as he addressed the state of law enforcement in the aftermath of the police shootings of Alton Sterling and Philando Castile, and also the shooting of five police officers.

“There is a deep divide between the black community and law enforcement ― a trust gap,” Senator Scott said. “We cannot ignore these issues. Because while so many officers do good ― and we should be very thankful in support of all those officers that do good ― some simply do not. I’ve experienced it myself.”

He spoke out on these encounters, experiences he said which left him humiliated and very scared because he has heard people attempting to paint Philando Castile and Walter Scott as criminals.

“I shuddered when I heard Eric Garner say ‘I cannot breathe.’ I wept when I watched Walter Scott turn and run away and get shot and killed. And I broke when I heard the 4-year-old daughter of Philando Castile’s girlfriend tell her mother, ‘It’s OK, I’m right here with you,’” he said.

This isn’t Al Sharpton, a bleeding heart liberal speaking.  This is a fairly conservative Republican.

He continued, “In the course of one year, I’ve been stopped seven times by law enforcement officers. Not four, not five, not six, but seven times in one year as an elected official. Was I speeding sometimes? Sure. But the vast majority of the times, I was pulled over for nothing more than driving a new car in the wrong neighborhood, or some other reason just as trivial…”

He added, “It’s easy to identify a U.S. Senator by our pin. I recall walking into an office building just last year after being here for five years on the Capitol, and the officer looked at me, with a little attitude, and said: “The pin, I know. You, I don’t. Show me your ID.” I’ll tell you, I was thinking to myself, “Either he thinks I’m committing a crime, impersonating a member of Congress” ― or, or what? Well, I’ll tell you that later that evening I received a phone call from his supervisor apologizing for the behavior. Mr. President, that is at least the third phone call that I’ve received from a supervisor or the chief of police since I’ve been in the Senate.”

Earlier this week, he issued a statement following the shooting of the officers in Baton Rouge.

“My prayers are with the families of the officers killed and injured in Baton Rouge this morning. Our law enforcement officers rush towards danger to protect the rest of us every single day, and it is horrifying to see a tragedy like this occur,” he said.  “This violence must stop; more bloodshed is not the answer – not now, not ever. I will continue, and step up, my efforts to find the path forward.”

He also released a video statement following the week of tragedies.

He said: “It is clear – we must have tough conversations. We must put ourselves in each other’s shoes.

“I first want to address each of the events of the past week individually. In Baton Rouge, Alton Sterling’s children are mourning the loss of their father. Their heartbreaking press conference showed us all the human toll that these shootings truly take.

“In Minnesota, Philando Castile died live…live on Facebook. The firsthand account of this event, and the video thereafter, is truly shocking. Having to hear a 4-year-old girl try to comfort her mother…it is almost impossible to put into words the emotions that image conveys.

“These two deaths are the latest in a troubling trend of disturbing videos involving law enforcement and black men. We experienced this in my hometown of North Charleston last year, and I could not be more proud of the way our community came together. Protests were peaceful, voices were heard and the healing continues.

“Then, last night, after police and protesters peacefully interacted throughout the night, came a devastating ambush in Dallas. Twelve police officers shot, five dead. There is absolutely no rationale for targeting law enforcement, and these actions are truly reprehensible.”

On Wednesday, Senator Scott went on to tell a story of the discrimination he faced when he was invited to an event with two of his staffers and two officers. “All four were white, and me,” he said.

When they arrived, the organizers would not let Senator Scott in, but they allowed everyone else in. The officers refused to go in without him.

“This is a situation that happens all across the country, whether we want to recognize it or not,” Senator Scott said. “It may not happen 1,000 times a day, but it happens too many times a day.”

Senator Scott closed his comments by calling on his colleagues to “recognize that just because you do not feel the pain, the anguish, of another does not mean it does not exist.”

Senator Scott’s courage to speak out is notable because, in a lot of ways, he is speaking out against a tide on the right that seems not to understand the discrimination that black people feel on a constant basis.

The more people like Senator Scott speak out, the less likely this is to be a partisan issue and the more likely we can solve it.