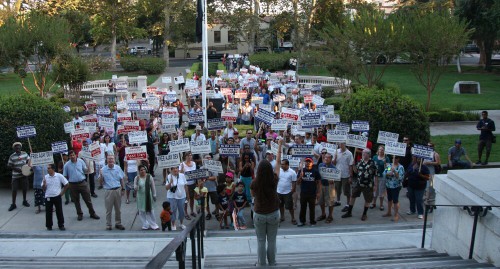 One American has been wrongfully imprisoned for 2,608 days, and the injustice that is his is far too common today.

The national conversation and insight exposing the putrescent American criminal justice system has been gradual and arduous. If it wasn’t for cell phones and security cameras capturing gruesome, often race-related murders, along with social media’s ability to lightning these images around the country, we may have still been lacking a national conversation today.

Instead we have the Black Lives Matter movement. We’re hearing a conversation about decriminalizing marijuana that has transcended the whimsical prattles of potheads to a sophisticated political stance questioning the billions of unnecessary dollars spent and thousands of years of excess jail time paid.

We, the United States, have already labeled the 80’s and 90’s the “tough on crime” era when growing conviction rates meant safer, cleaner streets; the currency of political success. Crime lessened while more people spent more time in prison.

Placated by the falling crime rates, our nation looked away while the justice system became more toxic at every step from catch to release. Executive rules were relaxed in a structure already bent against minorities while politicians provided further avenues to make more arrests. This, in turn, allowed for greater amounts of violence, especially against the already prejudiced members of our society. Police brutality and disproportionate arrests weren’t novel to these groups, but our “tough on crime” policies exacerbated the impalpable problems.

But this disease of injustice has spread even further through the system than many now realize. It has tied the hands of judges who can only watch while lengthy sentences are unfairly doled out for petty crimes. It sterilized the power of defense attorneys who are chronically overworked and under supplied, sometimes having only minutes to learn about cases and the corresponding life they are defending.

It has bloated the prosecution’s power to completely control court cases while essentially erasing all prosecutorial oversight. It has blocked current intelligence about common courtroom tools and tactics, like the unreliability of eyewitnesses, from reaching any meaningful public discourse.

It has allowed the development of the private prison industrial complex, which literally commodifies people’s freedom, that in turn reciprocates more toxicity back to the noxious system that spawned it.

Now we are enclosed in a venomous, self-sustained bidirectional system of accretion. The one hand intoxicates the other, allowing the US to ambivalently put more people behind bars at a higher rate than any other country on Earth.

But even these observations are merely broad strokes over the multitude of grievous cracks further splintered between them.

2,608 days an American has spent imprisoned, having committed zero crimes. The man, Ajay Dev, was charged in a system that may have had racial pressure coming from one side and economic pressure coming from the other, but he was certainly convicted in a way so heinous, in a way so despicable, that even the most optimistic among us can only see our justice system for what it is fast becoming: an anarchic meat market.

Ajay Dev was convicted of raping his adopted daughter 750 times. Despite the girl’s troubled history and previous false accusations made to police, despite the sterling reputation of Ajay Dev, despite the girl’s incredible allegation of being “raped” three times a week for five years and mostly in the same bed Ajay shared with his wife without her ever noticing, despite the accuser’s claim of being “raped” in houses that didn’t exist and around others who never noticed, despite her continually changing story, despite the complete lack of detection of physical or mental abuse by the girl’s adoption-mandated doctors and social workers, and despite many more oddities in her accusations, this man was convicted.

What evidence could have overcome such inconsistencies and blatant falsities? A translation of one phone call made between Ajay and his adopted daughter. This was a pretext phone call, recorded with a script prearranged by investigators with the intention of entrapping Ajay into admitting his crimes.

The merits of pretext conversations are not being explored here, but rather something much more shocking. Part of this conversation was conducted in Nepali, as both Ajay and the accuser are fluent, and one lightly spoken Nepali word was mistranslated into an act of sex, which was then taken to be an admission of sexual relations. The person allowed to translate this word was the adopted daughter who brought forth the accusations.

To repeat, this most pivotal single moment, this hardly discernible word spoken in another language and recorded on a pretext phone call, was allowed to be translated by the very person accusing Ajay of rape. The defense’s expert translator proved her translation to be incorrect, but her translation was allowed to stand anyway.

At first blush, one might feel the culprit of this sad story to be a confused and malignant girl of whom I’ve purposely provided no real context or motivation (of which there is plenty). And during a time when actual rape has reached staggering heights with dismally low reporting, the enemy of genuine rape is assuredly false indictments of rape. Yet still the system built to protect American freedoms is the ultimate criminal here; an immunodeficiency virus that has infected our courts, police and prisons, inducing them to lash out at us with swelling power and malice.

We used to belong to a country that practiced the creed, “Innocent until proven guilty.” It used to be difficult for one hysterical, unbalanced or prejudiced human to push another innocent or less dangerous human into prison.

But fear has mutated our judicial system. Fear has set this system against us and tainted many well-intentioned people operating within it. Today I ask you to consider our entire justice system as you consider this man and how easy it was to throw him in jail for 2,608 days so far, how easy it was to accept an extraordinarily flawed prosecution, how easy it was to bend or completely break our rules and regulations, how easy it has been to forget about this case and the days stolen from this man, his wife and his kids, and how easy it currently is to guarantee this innocent man stays locked away for another 135,365 more days.