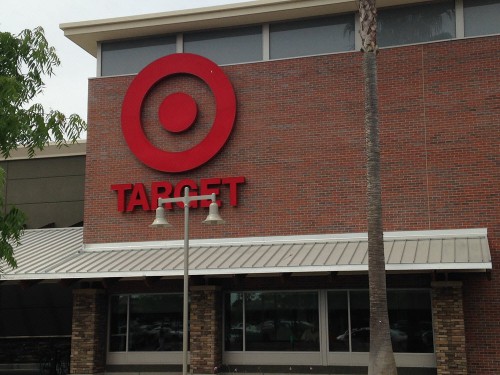 Yesterday’s article, that showed Davis lagging well behind both regional comparable cities as well as other college towns in per capita retail sales, generated a lot of comments, but most of it was finger-pointing rather than a search for a solution.

We need to start by identifying the core problem.  The problem is this: we do not have enough revenue in this city to pay for our existing city services and our existing infrastructure costs.  While it is tempting to look at the cost side of equation and blame it on spending too much on city employee compensation, the roughly $32 million gap in infrastructure suggests that this is primarily a revenue shortfall rather than a cost overrun.

This is a point that Steve Pinkerton, the former city manager, made in the spring of 2014 as he presented the fiscal situation to the community.

If the city is going to embark on a General Plan update we need to be able to accurately assess our community’s challenges.  From our perspective, a shortfall in student and rental housing is part of that equation – but the revenue shortfall may be even more challenging.

We can certainly point our fingers to the cost side of the equation, but the real problem and the bigger problem is revenue shortfall.

The first question is to assess why Davis’ per capita retail sales is so much lower than places like Woodland, Dixon and West Sacramento. Clearly, part of that equation is that Davis has less retail than its neighbors.

Clearly, as is in the case of Dixon, there are large companies that are fueling some of their retail sales that Davis is simply not going to duplicate.  In the case of a city like San Luis Obispo, you have the combined impact of available retail, tourism, and it being a regional hub.  In the case of a city like Palo Alto, you have the amazing driver of economic development, high-tech and Silicon Valley, converging on a major university. 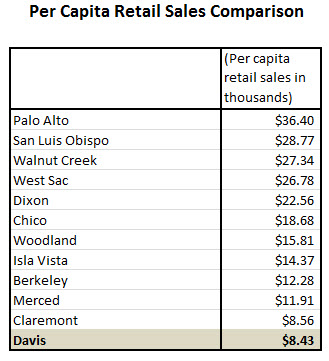 That brings me back to a discussion I had back in the summer of 2013 with the Chamber CEO Kemble Pope and then-City of Davis CIO Rob White.  The city had just lost Bayer-AgraQuest and all its jobs and tax revenue to West Sacramento.

The key question, as Rob White put it at the time, is that every university town undergoes similar pressures on how to grow while maintaining their character.

Rob White said that we know right now that the city of Davis does not want a regional mall.  That is a revenue source that many communities have gone to, but which Davis has opted not to do.

Kemble Pope noted that Davis has done a good job of identifying what it does not want to do, the regional mall being just one good example, and he said, “That’s fine. Davis continues to be the master of its own fate.”  But within that framework, Davis does have to decide what it is going to say yes to.

To me this is still the key question that we have not yet addressed.  We can look at these lists of cities on the retail sales per capita chart and all of them, in a way, have their own model – right now, Davis is at the bottom in retail sales per capita and is therefore struggling to find where its revenue is going to come from.

We have options, though.  We do not need to become West Sacramento, Walnut Creek, San Luis Obispo or Palo Alto.

Maybe what we need is to adapt a model closer to Isla Vista or Woodland – which have nearly twice the per capita retail sales.  What would that look like?  Would that be acceptable?

The model put forth by DSIDE, the Studio 30 Report, and later the Innovation Park Task Force is somewhat different.  The idea laid out in the Studio 30 report was to work on filling existing space, add a relatively small amount of R&D space at Nishi (Measure A defined about 300,000 square feet) and then add peripheral space somewhere between 2.5 million square feet and 4 million square feet.

That model would add revenue in two ways. First, with the hardcore capital infrastructure, we would add property tax.  Second, with point of sales exchanges, we would add sales tax.

The advantage of this model is that we would be working with our existing community strengths – our proximity to the expanding UC Davis, our agricultural heritage, and the strengths of UC Davis in the fields of agriculture, veterinary medicine, and medical technology.

By bringing in new high-tech employees, we would be able to cash in on a virtual tourism, where people coming here to work would buy food, retail items and services that would fuel additional tax revenue.

But that is not the only possibility here.  Last fall, Joe Minicozzi came to Davis to talk about his model which demonstrates that more dense and efficient uses of the land can generate far more revenue per acre than the types of economic uses many communities promote, in particular big box and malls.

The third model is to go more along the lines of Woodland and develop peripheral retail like they have with the area that has Costco, Target and Best Buy along I-5.  West Sacramento has developed a huge retail area along the freeway, I-80, as well, which includes Walmart and Ikea.

A fourth model would be to simply put about $1700 in parcel tax on the ballot, perhaps going up to $3000 in order to fund the schools as well, and have the taxpayers foot the bill to run the city.

Davis needs to figure out what it wants to be and how it wants to produce the revenue it needs to continue to provide high levels of city services while maintaining its infrastructure.

The one thing it cannot do – and continue to thrive– is the status quo.  We will not be able to fund our infrastructure and city services without new revenue.  How we get that new revenue is subject to discussion.

41 thoughts on “Commentary: What Can We Do to Close the Revenue Gap?”