There has been too much focus on the exact amount of housing that UC Davis should provide on its campus.  The bottom line is that UC Davis has not put nearly enough housing, and really has no legitimate excuse for being near the bottom in terms of providing for both overall students and undergraduates.

The Vanguard received this week a public records request from UC where they provided us with the latest figures, based on enrollment as of November 2015 and a housing survey conducted in December 2015 and revised in April 2016. 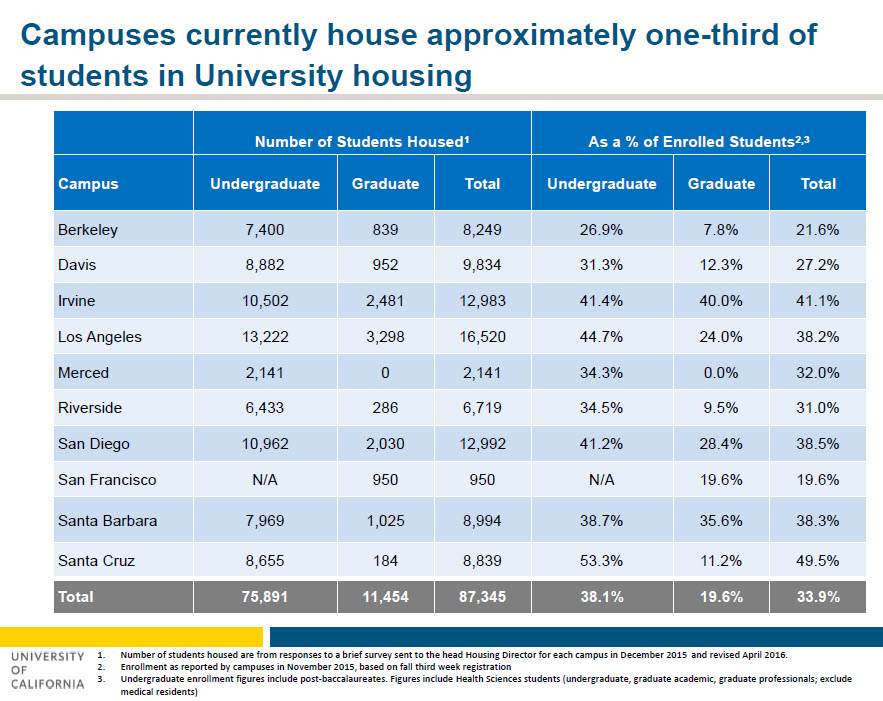 Let us break down the numbers here a little bit because, in a lot of ways, they are stunning.

UC Davis houses just 9834 students on campus out of about 36,000 total students.  That accounts for just 27.2 percent of all students.  That is not only below the system-wide 33.9 percent average but, of the regular campuses (excluding the Medical School at UC San Francisco), only Berkeley has a lower percentage of students living on campus.

The typical UC school houses about 38 percent of its undergraduate population on campus, and for Davis that is just 31 percent.  And again, that means more than 20,000 students attending UC Davis are crammed into apartments and mini-dorms around town.

We can understand why Berkeley – a dense, urban campus, surrounded by either steep terrain or urban development – would struggle to house their students on campus, but UC Davis really has no limitations of that sort and certainly, even if we can’t agree about how much developable land they have, they have ample land surrounding the campus that can be developed for housing – and yet they have not done so.

Through the LRDP (Long Range Development Plan) process, the university has committed to housing about 90 percent of new students in the next decade.  Given that projection of 7800 new students, we can figure on somewhere near 7000 more beds.  The reality, I think, is that we need to add somewhere between 10,000 and 11,000 new beds in order to not only house new students, but alleviate the crunch of current students.

Last week, the Vanguard visited Cal Poly and San Luis Obispo to understand better how other campuses are dealing with the issue.  Cal Poly has similar challenges to Davis.  The city has about a one percent growth cap, and the community is disinclined to build housing for students within the city limits.

But Cal Poly has considerable less land to develop on.  Right now the campus is in a bit of disarray, as they have torn out parking off Grand Avenue to build new dorms that will change the nature of the campus greatly.

As we noted last week, Cal Poly wants to house about 65 percent of its students on campus “as soon as possible.”

A January article in the San Luis Obispo newspaper quotes a Cal Poly spokesperson, Matt Lazier, stating that “in the coming months the university intends to begin the process of developing another student housing complex with the goal of housing all freshmen and sophomores on campus by 2020.”

That is a step that UC Davis hasn’t taken at all.

Poly Canyon Village, which we see as a potential model for what Davis can do, holds about 2700 students on 30 acres of land and consists of about nine 5-story buildings.

Could UC Davis undertake a massive project on 100 acres or so that could house 10,000 students, and have retail, food and entertainment in a mixed-use project?  Certainly.  There is certainly the ability do this out where West Village is currently located.

Again, we have in the past suggested that Nishi could become high-density student housing.  While there are concerns about air quality there, a one-year living situation with high-quality ventilation might solve those concerns.

But the university certainly has enough options and most people think the university has been slow, if not negligent, in addressing its housing issues in the past.

There is no legitimate reason why Cal Poly, with far less land, can commit to having 65 percent of its students on campus (a higher percentage even than UCLA and UC Santa Cruz), and Davis cannot get up to 40 or 50 percent.

If UC Davis would do that, it would help resolve a lot of the rental housing pressures on the students.  The 0.2 percent vacancy rate is not only a burden for students trying to find housing, it causes problems for their treatment by some landlords in town, it pushes single family homes into de facto mini-dorms, and prevents the city from addressing a number of other problems.

127 thoughts on “Commentary: UCD Can and Must Do Better with On-Campus Housing”