In February, the Davis City Council on consent voted 5-0 to accept a Gandhi statue, donated from the Indian government for a placement in Central Park.  So why, more than six months later, did Mayor Robb Davis and Mayor Pro Tem Brett Lee bring back the item for reconsideration?

They explained that groups of people – many of whom were Sikh and saw Gandhi not as a hero for peace but as a flawed individual who subjugated their population, seeing him not “as something we should aspire to” – had pressed for reconsideration and, therefore, the mayor and mayor pro tem saw it as a duty to hear out that group and pause the process.

After hours of at times contentious public comment, the council rejected reconsideration on a 3-2 vote, with the mayor and mayor pro tem dissenting.

The staff report from February indicated there is no cost incurred by the city for this donation. “The acquisition, installation, and ongoing maintenance costs for the proposed bronze sculpture shall be incurred by the donor, according to City policy.”

It was longtime Davis resident Sham Goyal, a retired faculty member from UC Davis, who arranged the donation and brought it from India.  It was noted during the public comment period that many of those opposing the statue in the park are non-Davis residents.

Mr. Goyal told the council that “erecting a statue of Gandhi is extremely relevant in this town in order to portray the fundamental character of this town.”  He indicated that “today I am standing in front you with my heart bleeding and head down in shame. I am hurting very badly due to the actions of the mayor and mayor pro-tem.”

He continued, “The city leadership, in a total disregard to hundreds of people’s feelings, have the brought the Gandhi statue item back to the city council agenda today. What for? All to please the feeling of only one or just a few Davis residents. They probably do not realize that in doing so they have set up a very dangerous precedent.”

Anita Dhesi, born in Davis and a lifelong resident, said, “I, too, have been a proud member of the Gandhi Statue Committee since we began this effort more than a year ago. I, too, am a member of the Sikh religion. And I, too, share the same unflagging commitment to the values of peace and non-violence that this statue represents, indeed, the very same values that Davis represents! As my good friend Sham Goyal points out, many cities that have a Gandhi statue are major metropolises, from New York to Washington, DC, and San Francisco. But we know that though Davis is small, we have an outsize commitment to peace and non-violence. This statue represents and celebrates our community’s longstanding commitment to peace and non-violence, and Davis’ warm embrace of diverse people.”

School Board President Madhavi Sunder argued that “there seems to be little reason” to reconsider the item.  She noted that the public process was “thorough, complete and transparent.”

“The issue of receiving the gift of this statue went before two public commissions and the entire city council. The issue was on the public agenda of the Davis Arts Commission no less than nine times,” she said.  “Reopening this issue disregards the many citizens and public staff members who have worked hard in reliance on the council’s decision. Sham Goyal on the council’s approval of the project flew to India and returned with a 1000-pound bronze statue, which is sitting now in a Davis warehouse. Asking for additional process now after one side has complied with the regular process makes a mockery of the rule of law.

“As a citizen of Davis, I could not be more proud to have this most powerful symbol of peace and non-violence stand in the Central Park of my community.,” Ms. Sunder continued.  “You’ve heard the accusation that Gandhi was a racist. But it was none other than Nelson Mandela himself who unveiled a similar statue in South Africa in 1993, declaring, ‘The Mahatma is an integral part of our history.’ Mandela explained that ‘Gandhi is most revered for his commitment to non-violence and the Congress Movement was strongly influenced by this Gandhian philosophy, it was a philosophy that achieved the mobilisation of millions of South Africans during the 1952 defiance campaign, which established the ANC as a mass-based organization.’”

Ms. Sunder’s 8th grade daughter, Anoushka Chander, was particularly eloquent, quoting Gandhi and saying, “Where there is love, there is life.”  She noted his role in the Indian independence movement, noting that worldwide “he is known as a peace symbol and advocate for non-violence.”  She called him “a man who brought India to freedom and lit a fire for independence around the world.”

Akash, a sophomore at Davis High, added that he was a man who “liberated his country simply through the power of peaceful protest.”  He said, “He did not only inspire Indians, but all those who fight against tyranny and oppression through non-violence.  He represents not just an independence movement but a right to speech and protest, a right we as Americans cherish.”

However, the push back was strong from those in the Sikh community around the region.  One person noted that he was proud of the children speaking, but he had a different view of the man.  He said that, for many people in India today, they have no access to education or medicine.  He argued that Gandhi did nothing for those people in the country.

Others pointed to research showing that Gandhi had a series of sexual indiscretions throughout his lifetime and may have had sexual relations with minors and relatives.

Amar Shergill said, “My need is I want Davis to remain a special place.  A place that respects social justice.  A place where I can bring my children to Central Park and not have a repugnant image hovering over us.”

Mr. Shergill argued that, if he were proposing the statue, “I would make sure at the very least that we would make those accusations go away.”

However, Sean Raycraft countered that he did not previously know many of the controversial things that Gandhi had done, and “these larger than life historical figures are often mischaracterized by history in the narrative.”  “Historical figures need to be humanized,” he said.  He asked that there be “some consideration as to humanizing the man, and not mythologizing the man.”

With Brett Lee and Robb Davis putting forward this matter for reconsideration, it came down to their colleagues’ votes.  Rochelle Swanson noted that there doesn’t have to be one statue, “that is not the Davis way.”  She noted that it is important that we honor the international day of Peace and non-violence.  She said that no one is perfect but felt comfortable with the procedure that the council had followed. 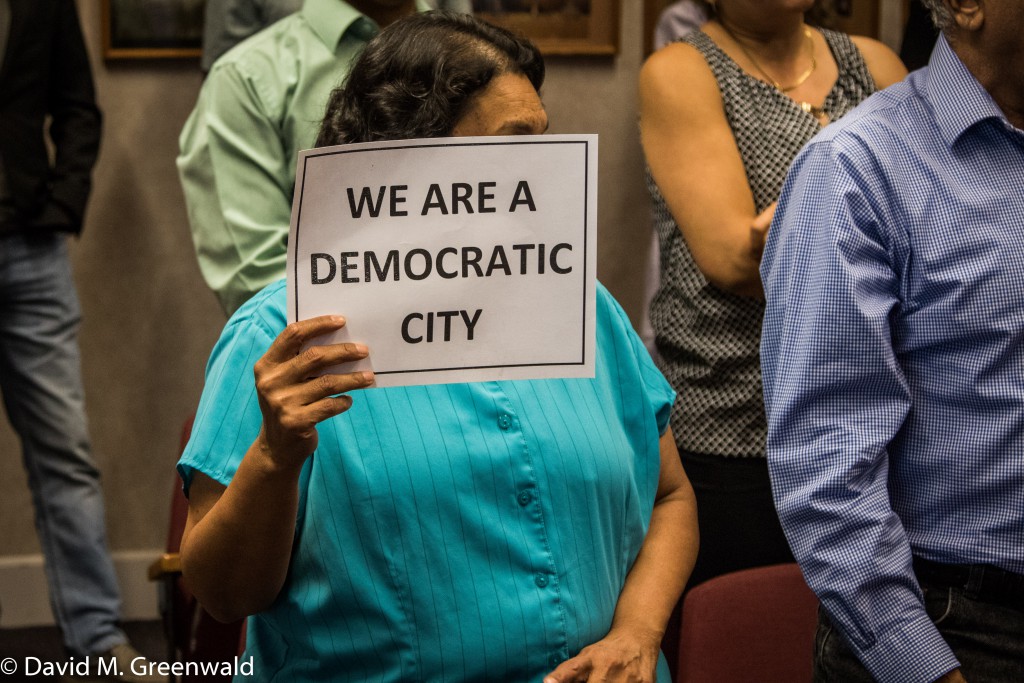 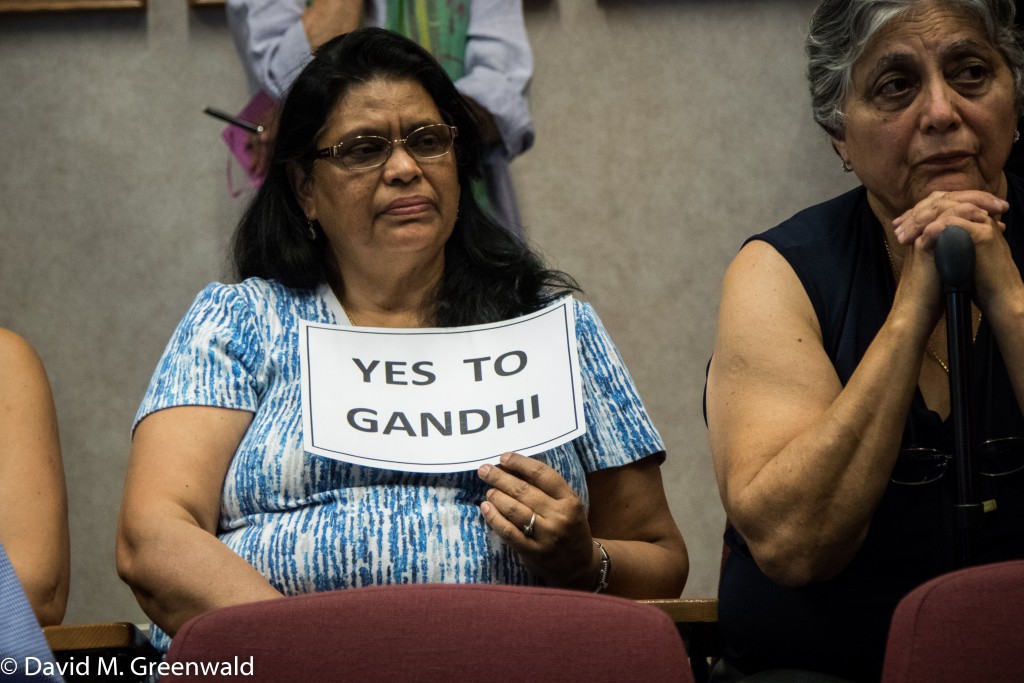 Councilmember Lucas Frerichs said the process, “frankly, has been transparent and thorough.”  He said, “I supported it then, I support it now.”  He noted that, for the opposition, “the process will never be enough.”  He concluded, “I do not support reconsideration at this time.”

Councilmember Will Arnold added, “Gandhi is history’s greatest teacher of humanity’s most important lesson, that peace is its own reward.”

Robb Davis acknowledged that this process would never lead to agreement between the two sides, but it leads to a time and space to listen to each other’s concerns.  He recalled his father’s opposition to Martin Luther King, Jr., and finally, after years of turmoil, hearing his father out on why he despised MLK – which had less to do with the man and more to do with the change in the country.

The council then voted 3-2 to oppose reconsideration.