The Yolo County District Attorney’s office announced in a press release this week that on August 2, 2016, the Yolo County Superior Court signed a settlement in a consumer protection case filed in March of 2016 against the former owners of the Royal Oak Manufactured Home Community in Davis.

Davis Group, LP., and Western Ventures, L.P., owned and operated the Royal Oak mobile home park until it was sold in April of 2015.

The DA’s press release stated,”The civil complaint filed by the Yolo County District Attorney’s Consumer Protection Division alleged that, between 2012 and 2015, Royal Oak did not properly inform buyers of various required information related to the sales of the homes. With the assistance and participation of local and state agencies, the case was investigated and filed earlier this year.”

The DA’s office announced, “As part of the settlement, Davis Group, LP. and Western Ventures L.P., agreed to pay up to a total of $22,000 in restitution to buyers of mobile homes who suffered undisclosed and unreimbursed costs at the time of their purchase of their homes.” It should be noted that the settlement put the restitution figure at $27,000.

The release continues, “Anyone who purchased a mobile home in the Royal Oak mobile home park and suffered unreimbursed costs that were not disclosed at the time of the purchase, or earlier, is urged to contact the Yolo County District Attorney’s Office.”

In 2014 and 2015, the Vanguard conducted an extensive investigation and interviewed more than 24 people prior to the sale of Royal Oak.  While the DA’s office has gained a small amount of restitution, it is a drop in the bucket for people who poured their life savings, in some cases thousands of dollars, into what they thought was the possibility of affordable home ownership.

A 2015 tour of the facility following the Davis police raids found appalling conditions.  A married couple that the Vanguard met with showed a home that they had purchased with appalling wiring and other problems to the point where it was unsafe to use the heater in the dead of winter with small infants.  The trailer was eventually condemned and the couple faced homelessness, but for the efforts of Supervisor Jim Provenza and his deputy Gina Daleiden.

While the settlement falls well short on the amount of monetary damages and actual losses by the residents, the settlement agreement explicitly lays out a number of the problems that the Vanguard witnessed in its 2014 and 2015 tours of Royal Oak.

(B) Violating the provisions of Health and Safety Code section 18046 by failing to conduct a reasonably competent and diligent visual inspection of the home offered for sale and failing to disclose to any prospective buyer all facts materially affecting the value or desirability of that home that an investigation would reveal;

(C) Violating the provisions of Health and Safety Code section 18035 and 18059.5, by failing to use escrow accounts and to have purchase funds go through escrow agent for every transaction by or through a dealer to sell or lease with the option to buy a new or used manufactured home or mobile home;

(D) Violating the provisions of Civil Code sections 1770(a)(19) and 1671(d) by collecting unreasonable and unconscionable amounts of money as a nonrefundable deposit, however, the parties to such a contract may agree therein upon an amount which shall be presumed to be the amount of damage sustained by a breach thereof, when, from the nature of the case, it would be impracticable or extremely difficult to fix the actual damage;

(F) Violating Civil Code section 1102.3, 1102.6 and Health and Safety Code section 18046 by failing to provide the mandated disclosure statement timely and as soon as practicable before the transfer of title and/or by failing to disclose all that is required on the transfer disclosure statement after a reasonably competent and diligent visual inspection;

(H) Violating Health and Safety Code section 18035.3(a) by deviating from its requirements regarding purchase orders, conditional sales contracts or other document evidencing the purchase of a home; and 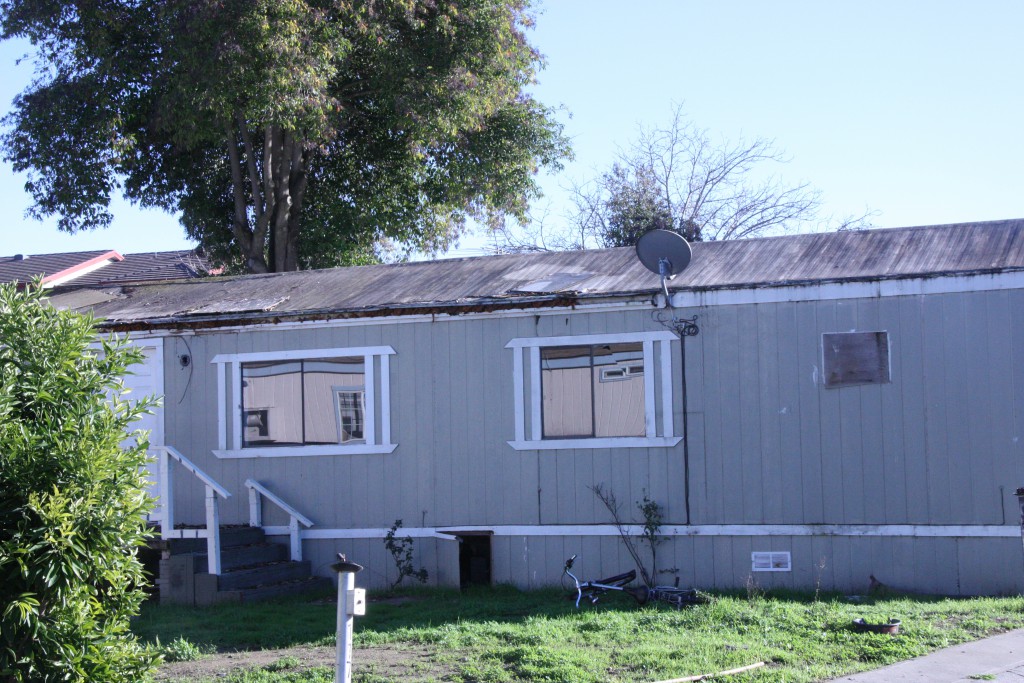 The Vanguard has since conducted a new tour of the facility and, while the new owners have cleaned up a lot of the problems, there is still work to be done.