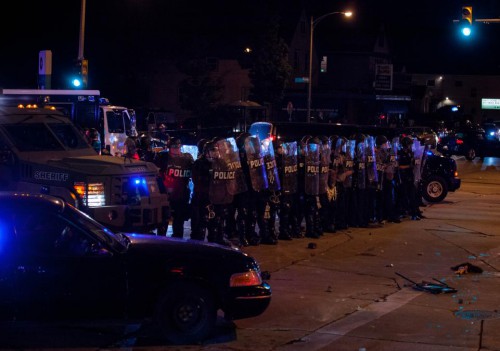 Another police shooting has generated protests and violence in an incident where it appears, at least initially, that police may have been justified in shooting the 23-year-old man they say was armed and had a lengthy criminal record.  If so, the community reaction may suggest that, justified or unjustified, it may not matter anymore.

The Milwaukee Journal Sentinel this morning described the scene: “For a second night, disorder hit Milwaukee’s Sherman Park neighborhood late Sunday, with protesters throwing rocks, bricks and glass bottles at police, shots ringing out and a shooting victim rescued by officers and whisked to a hospital in an armored vehicle.

“The disturbances came as the city coped with the aftermath of Saturday night’s violence that followed a police shooting of an armed suspect.

“At around 11 p.m., police dressed in riot gear had to move in and disperse a crowd at Sherman Blvd. and Burleigh St., after protesters started throwing objects.”

The Associated Press reports, “Online court records showed multiple charges against the 23-year-old Smith dating back to 2013. One was as minor as retail theft — which was dismissed — and other less serious offenses included speeding, driving without insurance, driving with a suspended license or having open intoxicants in a vehicle.”

However, they add, “There were more serious charges. Smith was accused in a shooting last year and charged with recklessly endangering safety, a felony.”

The Washington Post adds, “The dead man was identified as Sylville K. Smith, 23. Police said he and another man were pulled over about 3:30 p.m. Saturday. The two men fled, prompting the officer to chase them, Police Chief Edward Flynn told reporters Sunday. The officer was identified as a black 24-year-old who has been with the department for six years, three of them as an officer.

“Flynn said the stop was made for a vehicle that drew officers’ suspicion and turned out to be a rental car. He said about 25 seconds elapsed before Smith, who had run a few dozen feet, was shot.

“Smith was hit in the chest and arm, Flynn said, after he ran to a fenced area and turned toward the officer, holding a gun. Smith died at the scene, and a second 23-year-old man was taken into custody. There was no evidence that Smith fired his weapon, which was loaded with 23 bullets, the chief said.”

This is not the case of an unarmed man being shot by police.  This is a case where a man holding a gun was fleeing police.

However, the NY Times reports that “for many in the city’s marginalized black community, it was an explosive release decades in the making.”

The Times writes, “Milwaukee is one of the United States’ most segregated cities, where black men are incarcerated or unemployed at some of the highest rates in the country, and where the difference in poverty between black and white residents is about one and a half times the national average. There are barren lots and worn-down homes all over the predominantly black north side, while mostly white crowds traffic through the restaurants and boutiques downtown, or inhabit the glossy lakefront high rises.”

There is also a tale of “the disrespect that many black people say the police show them, and many of Milwaukee’s African-American residents are unsurprised by the volatile response after a police officer fatally shot a black man on Saturday — even though, as it turns out, the officer also was black.”

Here we are, the week after the explosive DOJ report on Baltimore and the next city which appears to have been a powder keg ready to explode – and it exploded in a case where the facts, at least initially, seem to favor the police.

Whatever you want to believe about Ferguson, Baltimore and other incidents, at least there you had a situation where it was initially believed to be a wrongful killing of an unarmed black man by the police.  In Milwaukee, that is clearly not the case.

Some will take this back in the direction that people have stirred this up.  But the description in the NY Times seems to tell the tale, “Milwaukee, a city of nearly 600,000, joins other embattled parts of the country like Baltimore and Ferguson, Mo., where police killings did not so much draw outrage for the deaths alone, but for the systemic problems that have so many black people feeling hopeless.”

In the last two years since the death of Michael Brown, the belief has been to treat the symptom of police shootings and police misconduct with measures to ensure transparency, like body-worn cameras and changes in the use of force guidelines.

That is what Milwaukee did after the feds declined to charge a former Milwaukee police officer in the fatal shooting of an unarmed black man.  At that time, “the city’s police chief, Edward A. Flynn, asked the Justice Department to work with his department to examine its patterns and practices. The review, Chief Flynn has insisted, would show that his department was doing things right and committed to transparency.”

However, the Times notes, “Chief Flynn received praise from some black people for firing Mr. Manney, but some criticized the chief because he refused to say that the shooting itself was unjustified.”

The belief was, “At the end of the day, he’s going to support his officers, even when wrong is wrong.”

It seems that the handling of that incident may have triggered the response here, even though the two men ran from the car and one of them was armed, refusing to drop his weapon, when he was shot.