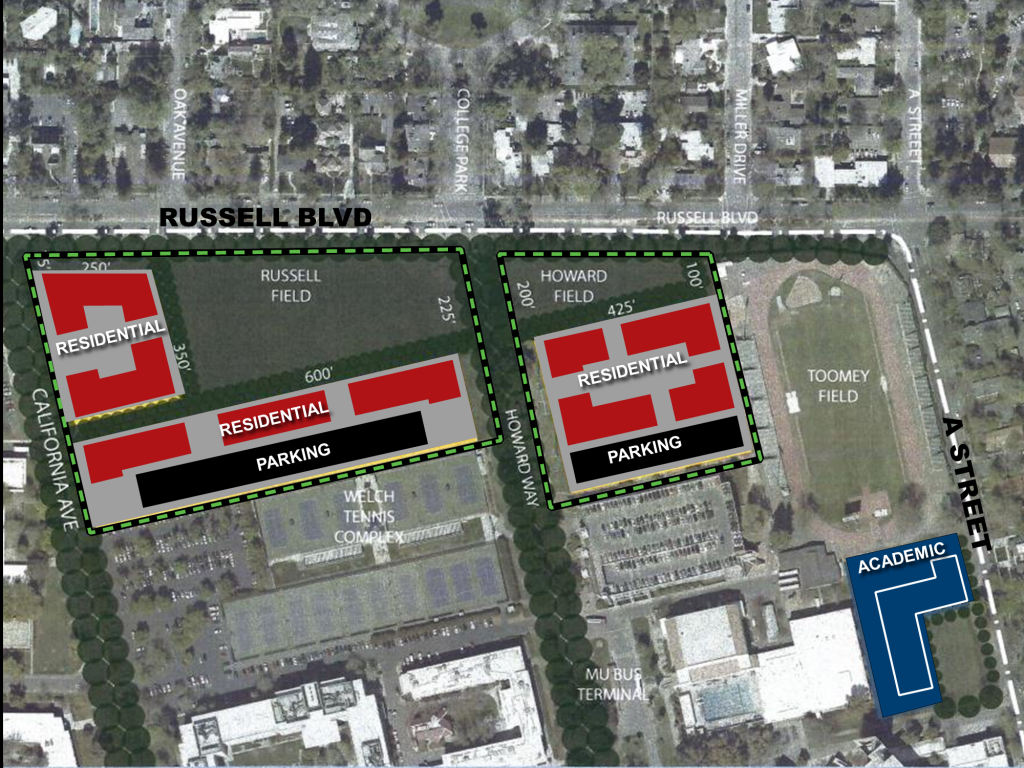 In pushing to extend their on-campus housing to 90 percent of new students over the next decade, UC Davis is looking at developing the athletic fields along Russell Boulevard with potential three-story apartments.  That proposal has had considerable pushback, including on Tuesday where several residents of the adjacent neighborhoods asked the city to push back against the university.

One resident, a retired professor, noted that currently the fields are alive with sports and activities and that the university is planning to perhaps reposition them on the far end of West Village.  “We owe it to the community to provide support to maintain those fields for the reason they’ve been there for decades,” he said.  He said this is a shared interest and “something we’d like to have the city support.”

Former Assemblymember and County Supervisor Helen Thomson also objected to housing on the Russell Field area, calling it “an attractive already-busy entrance to the campus.”  She noted the sports and intramural activities, and that even the Aggie Band practices there.  “With this amount of housing on those fields, all of that will be lost to (the) site and use,” she said.

She expressed concern about additional traffic to the “already-congested and very narrow intersection of Howard Way and Russell Blvd.”  She described a number of “near misses” between cars and bikes at this intersection.

Helen Thomson asked that the council formally agendize a discussion of this issue at the next council meeting “so that you can hear what is being proposed and make your comments as well.”  She wants council to support the neighbors “in asking that the campus not put housing on those fields.”

Steven Roth followed up, stating that most people support the university’s intention to build more housing on campus, but “the concern is that it doesn’t need to be done by eliminating Russell and Howard Fields.  There is an existing site that was agreed to in a very very long and participatory process in establishing West Village.  The university is proposing to unilaterally eliminate the site at West Village and instead transport it to where we would eliminate Russell and Howard Fields.”

He argued there is no reason to lose those fields.  He argued that “it creates an atmosphere where the university feels like it’s turning its back on the campus and, frankly, it feels like it’s becoming more of an Isla Vista situation where you have students who don’t have to go downtown.”

Colin Walsh said he’s a big fan of the university building more housing, including on West Village and in West Davis.  He asked the crowd there for this issue to raise their hands, and he asked, “Why are we here?  We know that the council doesn’t have direct power over this but you’re meeting (with the university), you can apply pressure.”

“Instead, UCD continued to neglect its student housing needs and its commitment to our community and to their students, and what little they have built has been freshmen dorms that just house the students for the first year and then the students are forced off campus to find housing elsewhere – that ends up being primarily in Davis.”  She said that results in “a disproportionate amount of our rental housing being used by UCD housing needs due to UCD’s gross negligence in providing student housing, that’s causing the same kind of problem in nearby cities as well…”

Ms. Samitz further noted that, given the amount of land UC Davis has, “they should not be paving over the green space of Russell Field and Howard Field which is loved…”  She added that “the last thing we need right now is to have more traffic on Russell Boulevard, particularly since it’s been narrowed… An apartment complex on Russell is going to exacerbate these issues.”

She claims her group has identified 100 acres of alternative areas where high-density and high rises can be built to accommodate student housing needs.

Sunny Shine also spoke out as a member of Friends of the Russell Boulevard Fields.  She expressed concerns about the traffic impacts and the increase in cars from putting apartments there.  This would add 800 cars to an already-congested intersection.  She believes that intersection is extremely dangerous now and this would make it more so.

While the city doesn’t have direct jurisdiction, the university has asked for input from the city, and the council has appointed a subcommittee to hopefully work with the university as they go forward with their long-range planning.