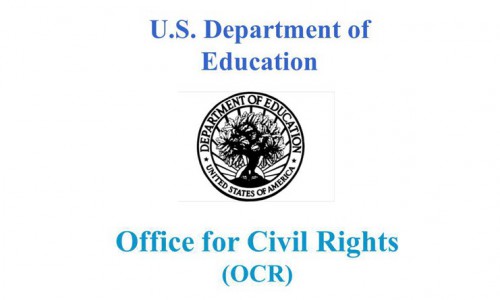 One of the biggest complaints about the changes to the AIM program was the drastic reduction in the participation, particularly by black and Hispanic students, in the new program compared to the old program.

Through its Yolo Leaks site, the Vanguard was tipped off to the fact that the US Department of Education’s Office for Civil Rights (OCR) was investigating the school district.  The Vanguard through a public records request (PRA) has now received a copy of the June 16 letter to former Superintendent Winfred Roberson.

The allegations are laid out in the letter as: “The Recipient is discriminating against students on the basis of race /national origin by implementing policies and procedures that result in an underrepresentation of African American, Latino, and English Learner (EL) students in the Recipient’s gifted and talented program, known as the Alternative Instructional Model (AIM).”

Second, “The Recipient is discriminating against students on the basis of disability by implementing policies and procedures that will result in an underrepresentation of students with disabilities in the Recipient’s AIM program.”

In the letter, the OCR notes, “We have determined that the allegations stated above are appropriate for investigation under the laws enforced by OCR. OCR will proceed with resolution of the complaint.”

The Vanguard reported on Friday that the district made reference to this investigation.

John Bowes, the new Superintendent, indicated, “We routinely comply with such requests for information from regulators and we’ll certainly comply with the law and are committed to offering equitable access to all of our programs.”

Superintendent Bowes stated that, in the past year and a quarter, the district has carefully examined the program, what its qualifiers are, and adjusted accordingly, making revisions to what he called “processes and procedures.”

“We have been remaining transparent in doing this and our assessment of these programs continues and we plan to present further refinements to the board, later in 2016, and we look forward to any comments that the Department of Education has for us on that.”

As the Vanguard has reported, the final AIM number not only saw a reduction from 146 down to 72 students, but the number of black and Hispanic students fell heavily.

Back in March, Madhavi Sunder, the board president, asked her colleagues, “Are the racial demographics acceptable?” She suggested we put a pause button on the 98th percentile

Barbara Archer would explain that she was “not ready to talk about the 98th percentile” issue. She also was not prepared to argue that the numbers of blacks and Latinos were unacceptable until the district had finalized numbers.

Alan Fernandes directly stated that he “doesn’t find the demographics acceptable,” but he did hear that the district was looking into ways to change it. He said he is not married to this approach and would be willing to support a change down the road.

Susan Lovenburg expressed concerns “that the protocol put in place hasn’t matched the diversity of the district as she hoped that it would.”

This spring, Ms. Lovenburg told the Vanguard, “I believe we are making good progress with reforms to the AIM assessment protocol, and I’m pleased we’ve been able to achieve some measure of consensus on the board in doing so.”

She reiterated, “I do have a concern that the protocol is not yet identifying an AIM cohort that matches the student demographic profile of our district.  I reject the notion that some races or ethnicities have a higher incidence of giftedness than others.”

Alan Fernandes told the Vanguard that, while he is “generally pleased with the AIM reforms relating to the elimination of private testing, transparency of the identification process, and the expanded use of multiple testing measures,” he has continued concern “about underrepresentation of the Black and Latino population.”

However, he added, “I am no less concerned about the impact of the identification process and the program on this population of students than I was even before our School Board unanimously passed these reforms.”

He told the Vanguard, “I do, however, believe that it is too early to make final conclusions of the policy as it has not been fully implemented, but certainly if adjusting the cut off disproportionately and negatively impacts any student population I would consider changing the test cutoff to ensure a better outcome for all of our students.”

Tom Adams, likewise, was hopeful for the new process with regard to consistency and transparency, but he added, “As for African American and Latino/Latina students, this is an ongoing concern and we will need to have the most appropriate assessment for identifying all of our AIM students. The AIM Assessment Team ensures a variety of educators are involved in the identification of students.”

This spring, the board was not willing to pause the implementation of the 98th percentile that would potentially further reduce diversity in the program.

The question is what the OCR will conclude in their investigation.

The OCR has asked the district to provide the following: