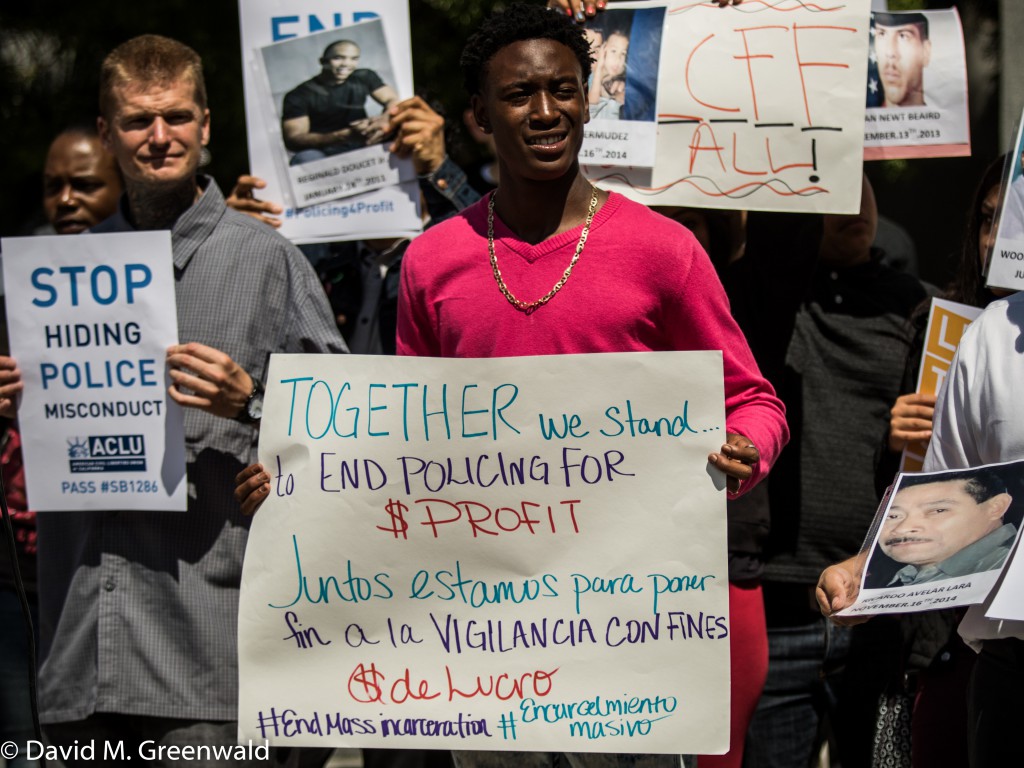 (From ACLU Press Release) A California bill to limit civil asset forfeiture abuses was approved today by the State Assembly on a 66 to 8 vote. The bill will now return to the Senate for a concurrence vote.

“Today’s vote is a tremendous victory for fairness and justice,” said Margaret Dooley-Sammuli, Criminal Justice and Drug Policy Director for the ACLU of California. “For years, the scales of justice were tipped in favor of profits and against the fundamental rights of countless Californians who were unfairly deprived of their life savings and property through civil forfeiture laws. Today, the Legislature got it right.”

Current state and federal civil asset forfeiture laws give the government permission to seize personal property, allowing law enforcement to then keep what they take. California law, however, provides greater due process protections than federal law. Federal law does not require a conviction and places the burden on defendants to prove their innocence and fight to get their assets back – at their own expense. Unfortunately, state and local law enforcement agencies can and do opt to use federal law.

“Low income people simply do not have the means to hire an attorney to get their lawfully earned cash returned to them. When their money gets taken by law enforcement, it’s a family crisis affecting rent, food, everything,” said Zachary Norris of the Ella Baker Center for Human Rights. “Senator Mitchell’s bill will reduce the number of times that families in California are put in these completely untenable and fundamentally unjust situations.”

According to a report by the Drug Policy Alliance, over the last ten years, the number of cases in which state and local law enforcement circumvented California law and used federal law instead tripled, while state cases have remained flat. That same report found that California law enforcement agencies raked in nearly $600 million from civil asset forfeitures under federal law between 2006 and 2013. Meanwhile, state forfeitures resulted in about $140 million for those agencies during that same time period.

“By passing SB 443, lawmakers are taking aim at an appalling loophole that has let California law enforcement pad their budgets,” said Lee McGrath, Legislative Counsel for the Institute for Justice. “Requiring a criminal conviction in most forfeiture cases is a common-sense approach to protecting the rights of the innocent, without jeopardizing public safety.”

SB 443 was introduced in the Legislature last year, sailing through the Senate, but failed to garner enough votes to make it off of the Assembly floor. The bill was amended earlier this year, prompting several law enforcement entities to remove their opposition to the bill.

Now that the Assembly has approved SB 443, the Senate will have to approve it once more before it is referred to Governor Jerry Brown for final approval.

If signed into law, SB 443 would offer some of the strongest personal property protections in the country. Specifically, SB 443 provides that:

SB 443 is co-sponsored by the ACLU of California, CHIRLA-Coalition for Humane Immigrant Rights of Los Angeles, the Drug Policy Alliance, the Ella Baker Center for Human Rights, and the Institute for Justice.

California Legislature Says No to Discrimination in Voting

As voter suppression laws are struck down throughout the country, California moves to clarify who can vote with a criminal conviction in the state

(From ACLU Press Release) Today the California State Senate voted to send AB 2466 (Weber, D-San Diego) to the Governor, rolling back a discriminatory voting restriction in California that is a carry-over from the Jim Crow era, when states made it harder for black citizens and other minorities to register and vote.

“Courts in the last two weeks are taking action to reverse overtly discriminatory voting laws enacted in North Carolina, Wisconsin, Texas and Kansas,” said AB 2466’s author, Assemblywoman Shirley Weber. “But while national attention is focused on a few states, many fail to realize that in California voters of color have suffered new restrictions on their right to vote in recent years. I wrote AB 2466 because I want to send a message to the nation that California will not stand for discrimination in voting.”

In the wake of actions by state officials over the past 10 years to limit the right to vote for people sentenced for felony convictions, AB 2466 codifies recent court decisions affirming the right to vote for people serving a sentence for a low level felony and settles, once and for all, who can and cannot vote with a criminal conviction in California.

“Many Californians believe that any contact with the criminal justice system means they have lost their right to vote,” said Dorsey Nunn, executive director of Legal Services for Prisoners with Children. “We should inform those with conviction histories as well as the general community the status of the current law, and work to keep as many connected to their communities as possible. Even if a person has a conviction history their family, friends, and community still need him or her to be actively engaged in democracy. We should encourage those willing to re-enter society to fully do so.”

In California alone, three out of every four men in prison are African American, Latino, or Asian American. That means that felony disenfranchisement laws continue to have a much greater impact on voters of color. This disparate impact serves the same basic goal that voter suppression laws created in the post-Civil War Jim Crow era did: to erase the views and electoral wishes of freed slaves and people of color for generations.

“The ongoing confusion about who can vote with a criminal conviction means untold thousands of Californians who are eligible to vote are actually excluded from our democracy instead,” said Assemblywoman Lorena Gonzalez (D- San Diego), who also co-authored the legislation. “AB 2466 guarantees more civic participation, especially in communities of color, and it gives local election officials and the Secretary of State new, important tools to uphold the integrity of the voter file and our elections.”

“The legislature’s vote demonstrates that our elected officials want to be on the right side of history and end this insidious form of voter discrimination,” said Lori Shellenberger, director of the ACLU of California’s Voting Rights Project. “It’s also a vote for public safety. When we allow people to exercise their civic duty to participate in our elections we reduce their chances of re-offending and make our communities safer.”

One thought on “Pair of Reform Bills Pass California Legislature”