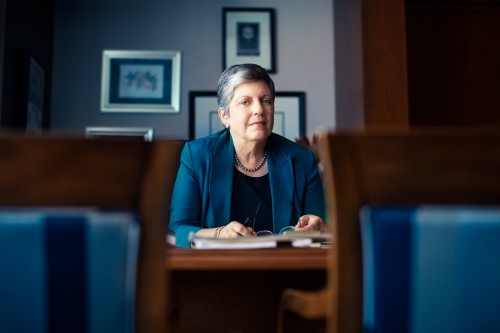 With the investigative report completed, UC President Janet Napolitano on Tuesday sent a message to UC Davis faculty, many of whom have remained in support of Chancellor Katehi.  In it she wrote that, on April 25, she met with the chancellor to discuss what she called “a series of misjudgments and policy violations of such a serious nature that she should resign her position as chancellor of UC Davis.”

“Regrettably,” the president writes, “Chancellor Katehi refused to resign and made public statements to campus leadership and others that she intended to remain as chancellor.  I then placed Chancellor Katehi on immediate administrative leave and authorized the hiring of an outside firm to investigate a number of concerns.”

The report, President Napolitano says, “found numerous instances where Chancellor Katehi was not candid, either with me, the press, or the public, that she exercised poor judgment, and violated multiple University policies.”

She writes that the chancellor has now offered to resign and that resignation has been accepted.

“These past three months and the events leading up to them have been an unhappy chapter in the life of UC Davis.  I believe it is in the best interest of the campus, the Davis community, and the University of California that we move forward,” she writes.

Chancellor Katehi will now transition to become a full-time faculty member.  UC Davis will conduct a national search for a new chancellor and Ralph Hexter will remain as interim chancellor.

President Napolitano, however, “understood her to mean that there were no issues whatsoever with respect to their employment, which was not entirely accurate.”

However, the report concludes, “In any event, it does not appear that Chancellor Katehi attempted to intentionally mislead President Napolitano during their call on April 19, inasmuch as it does not appear she was aware of the specifics of any employment issues related to her son and daughter-in-law at that time.”

The social media and strategic communications contracts clearly generate most of the headlines.  The report summarizes, “The evidence gathered indicates that Chancellor Katehi minimized her knowledge of and role in certain social media and strategic communications contracts in her discussions with President Napolitano and the media.”

She told similar things to the Sacramento Bee editorial board.

The report finds, “The Chancellor’s statements were misleading, at best, or untruthful, at worst.”

The report summarizes, “In reality, Chancellor Katehi initiated UC Davis’ relationship with Nevins by unilaterally contacting an executive recruiter to find a social media consultant to help repair reputational damage caused by the 2011 pepper spray incident. She approved replacing Nevins with another company, Purple Strategies, which was recommended by the head of Strategic Communications, and when that engagement ended, she directed her Chief of Staff to find another company to continue the work. He in turn identified IDMLOCO, which was ultimately hired.”

It adds, “Although Chancellor Katehi did not negotiate the contracts or oversee the day-to-day work of the consultants, she advocated for or approved the hiring of each company, participated in meetings with each, and was aware of and reviewed their work product from time to time.”

On student fee revenues: “While the use of SASI [Student Activities and Services Initiative] fees for PE instruction was arguably inconsistent with the text of the SASI, the evidence establishes that any such inconsistency was inadvertent, had no substantive budgetary impact, was remedied shortly after being recognized, and resulted in a new control mechanism to help ensure the optimal allocation of SASI funds going forward. The investigation team identified no policy violations or management concerns related to the use of SASI revenues.”

However, the report finds two violations with regard to reimbursements.  In one case they conclude that, while the practice violated policies, “Chancellor Katehi did not personally profit from this arrangement,” and in the second case, “It does not appear that Chancellor Katehi personally profited, or that UC Davis suffered a financial loss, as a result of these policy violations.”

With respect to DeVry, the report hits her for “disregarding” certain “information regarding government investigations and enforcement actions directed at DeVrv University, as well as other concerns about the for-profit education industry in general. Although she was aware of information that should have caused concern, at the same time she was unaware of other information because she did not exercise any meaningful due diligence before joining DeVrv’s Board of Directors.”

The report hits her for failing “to exercise diligence and judgment in 2012…” and noted, “Chancellor Katehi did not comply with University policies governing the reporting and approval of her outside professional activities.”

Finally, there is “no evidence that Chancellor Katehi retaliated or threatened retaliation against employees for their cooperation with this investigation or with UCOP.”

14 thoughts on “Report Hammers Katehi in Some Places, but Exonerates Her in Other Places”