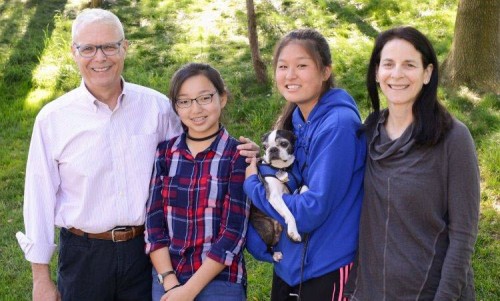 On Friday, September 2 from 9 to 10 a.m., have coffee or tea with School Board Candidate Bob Poppenga at Common Grounds Coffee at Oakshade Town Center, 2171 Cowell Boulevard.  Learn about Poppenga’s campaign, his ideas for Davis schools, and bring any questions you have.
On Sunday, September 4 from 10 to 12 in the morning, bring your pooch to Toad Hollow Dog Park at 1919 Second Street for a special doggie treat while you chat with Bob.
Bob is faculty veterinarian and animal and food safety scientist at UC Davis.  Prior to that, he held faculty positions at other top veterinarian schools.  In 2004 he moved with his spouse (also a faculty veterinarian)  to join UC Davis’s #1 ranked veterinarian medicine school. Their two daughters, ages 13 and 16, attend Davis public schools.
Poppenga’s endorsements include Senator Lois Wolk, County Supervisor Jim Provenza, current Mayor Robb Davis, current City Council member Will Arnold, current School Board President Madhavi Sunder, former Assemblywoman Mariko Yamada, former Mayors Joe Krovoza and Dan Wolk, former California Supreme Court Justice Cruz Reynoso, former City Council member and DJUSD teacher Deb Poulos, and former School Board members Joan Sallee, B.J. Kline, and Gina Daleiden.
For a complete list of endorsements and more information about Poppenga’s campaign, please go to Bob4Schools.org and www.facebook.com/bob4schools

.   Bob can be reached at rhpoppenga@gmail.com and welcomes hearing from you.