This weekend I drove around Poly Canyon Village getting an appreciation for the scope and the immensity of the student housing project comprised of nine 5-story residential housing buildings that hold about 2700 students on 30 acres.  (Please see Tuesday’s story for those photos).

On Wednesday I was able to arrange a small tour of the interior of the project.  Obviously the details of the interior can change depending on need, but it enabled me to get a sense for how Cal Poly chose to use the facility.

As we noted, Cal Poly wants to house about 65 percent of its students on campus “as soon as possible.”

A January article in the San Luis Obispo newspaper quotes a Cal Poly spokesperson, Matt Lazier, stating that “in the coming months the university intends to begin the process of developing another student housing complex with the goal of housing all freshmen and sophomores on campus by 2020.”

On the tour I learned that Poly Canyon Village (PCV) is mostly a sophomore living area.  There is one building dedicated to transfer students, but for the most part it houses second-year students.  According to my tour guide, about half of the campus’ sophomores live in this facility.

Cal Poly is in the process of adding additional student housing.  The entire swath on the west side of the former Grand Avenue entrance has been torn up and there will be additional housing there, it appears as soon as 2020.

On the tour, we got to see a model unit.  Again, the specifics of how another location would situate living space and accommodations would be subject to change.  Basically these are modeled as halfway between a dormitory and an apartment.  The corridor looks like a hotel hallway. 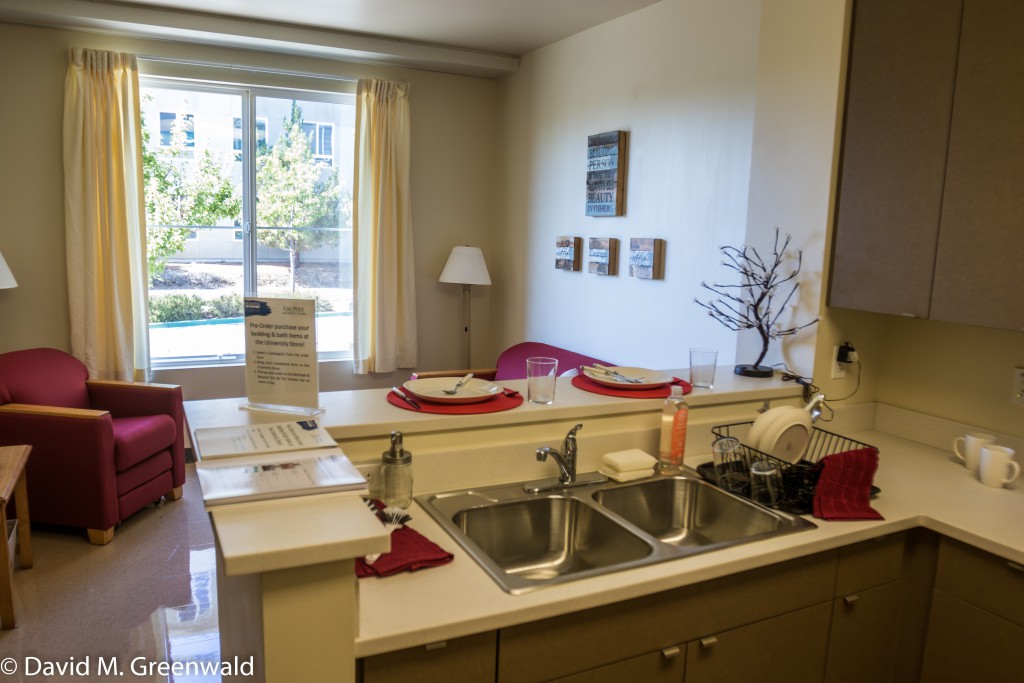 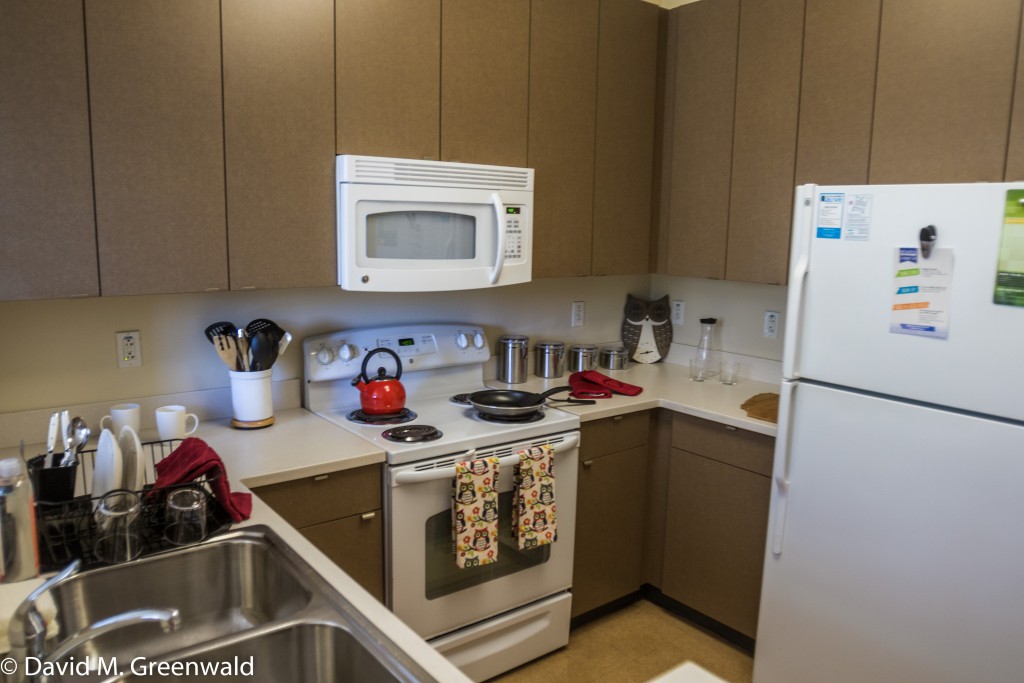 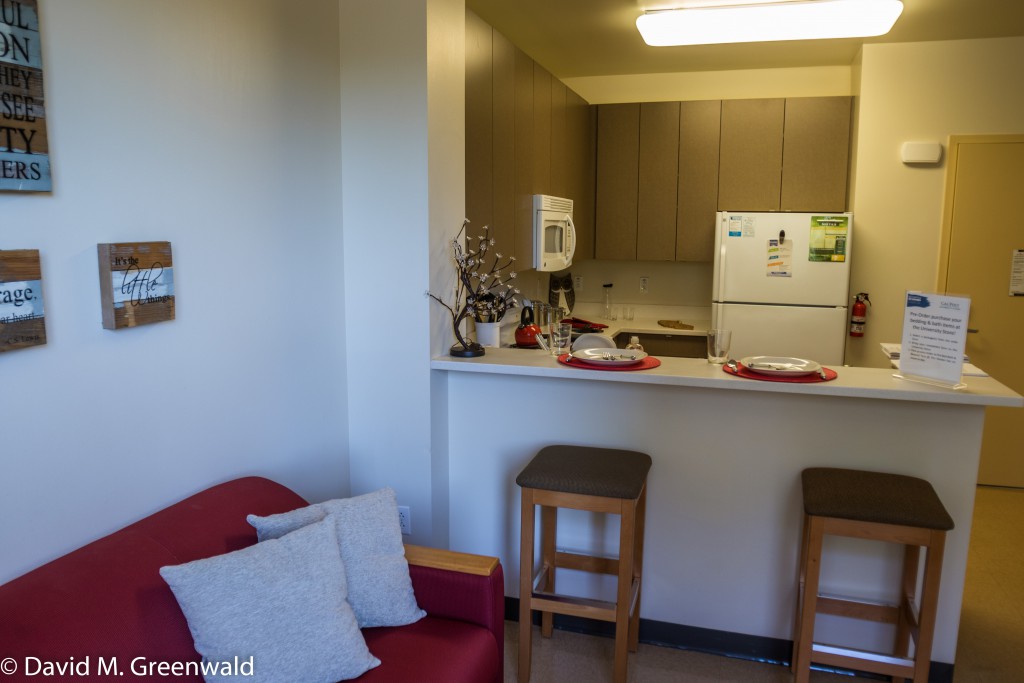 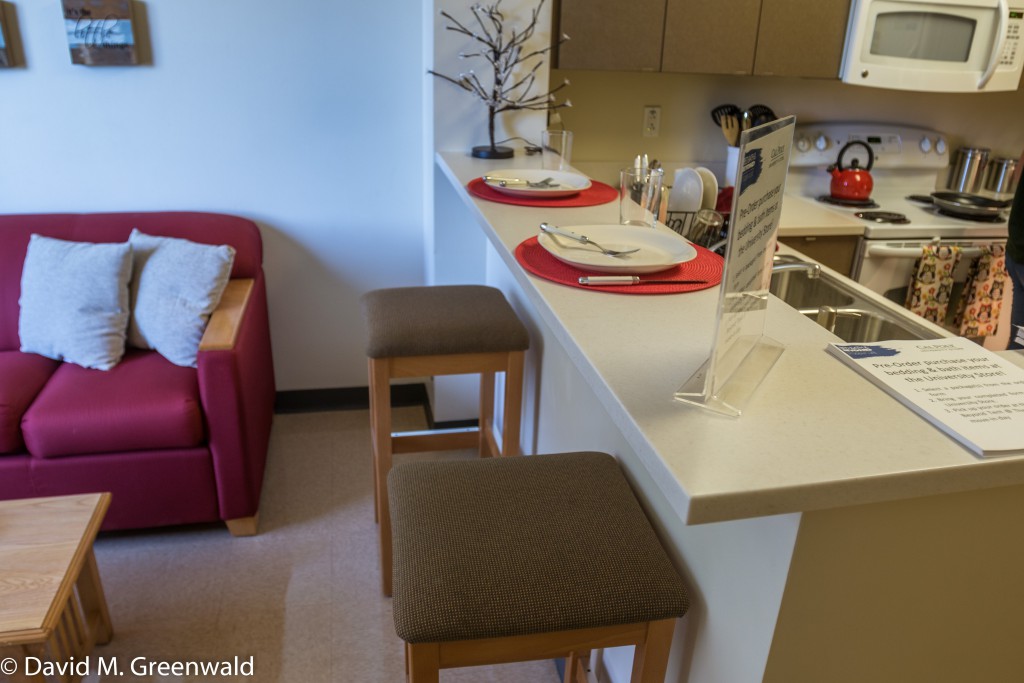 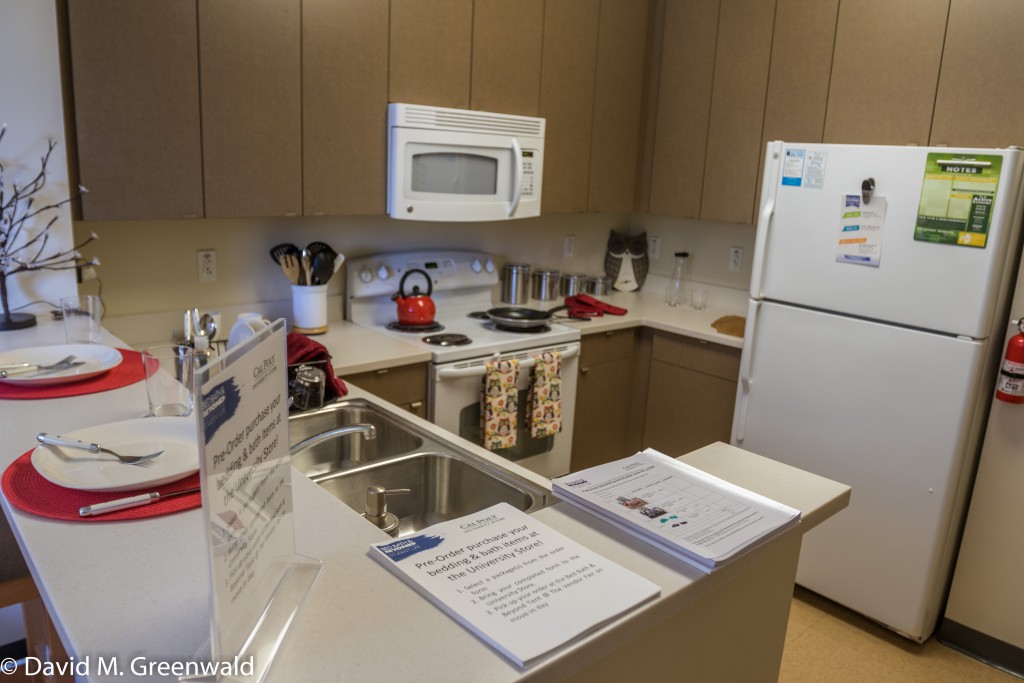 The guide told us that most of the students do not use a meal plan when they live a PCV.  The units have a kitchen with a stove, refrigerator, microwave and sink.  The place settings, dishes and pots are not included.  She explained that most students buy their own food – Trader Joe’s is a popular destination for students – and prepare their own meals.

The living space has a small living room or common area with a couch and easy chair.  There is a mounting for a TV, but the trend for most students seems to be away from purchasing TVs and toward using laptops and tablets to watch streaming shows on Hulu and Netflix.  However, she had a friend who lived in a location where they hooked up two TVs and used it to show movies.

Each of these units have four or five single-occupancy rooms where the student has living quarters which are furnished with a bed, storage beneath the bed, a closet and a desk. 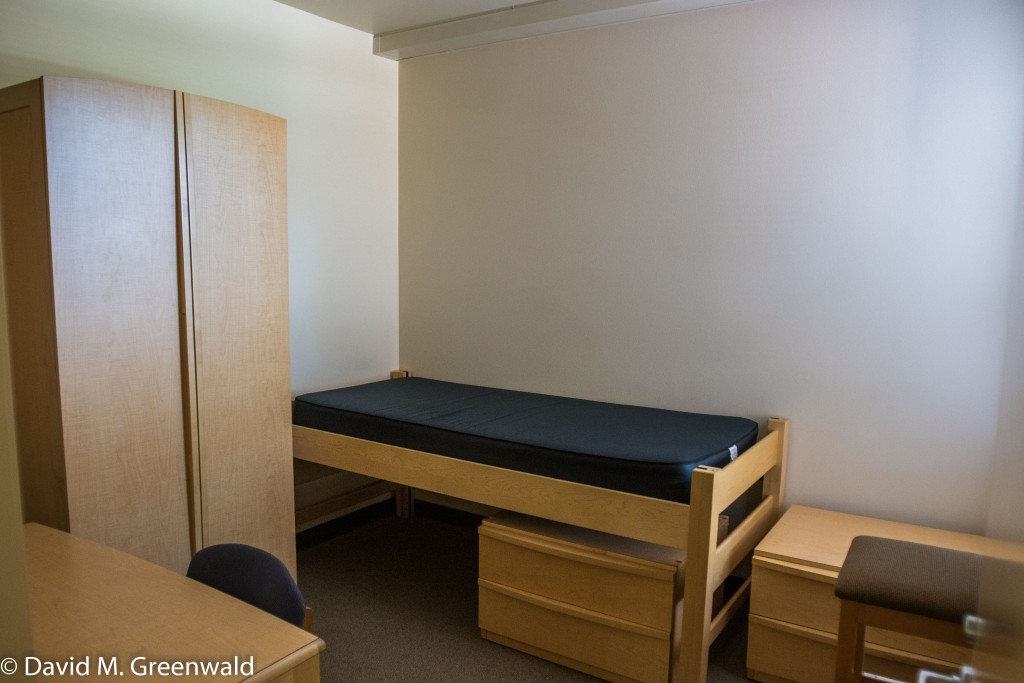 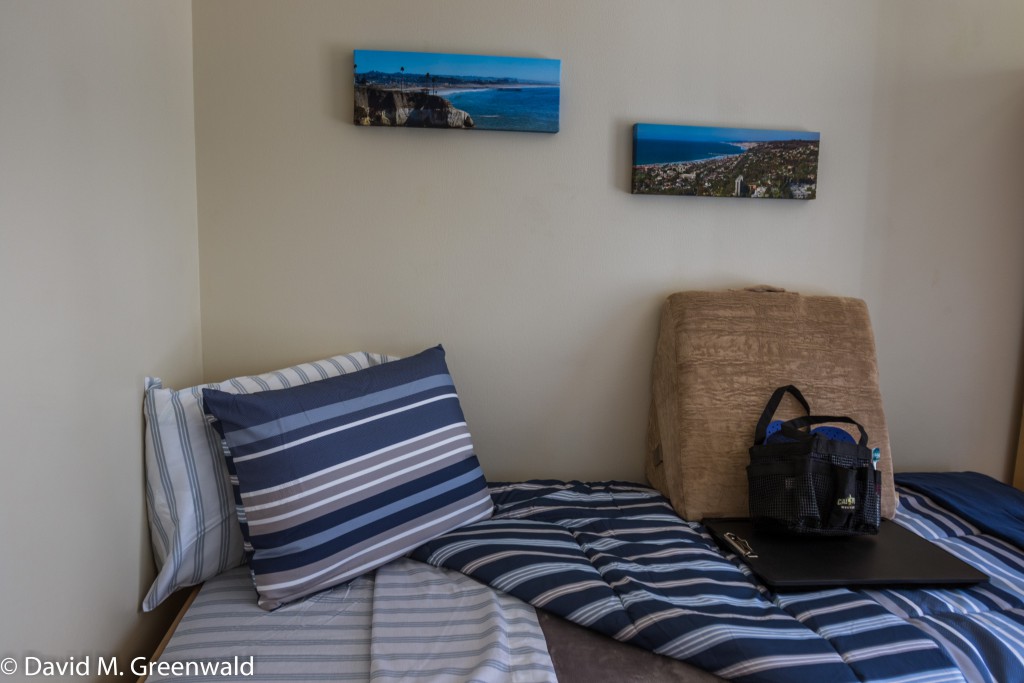 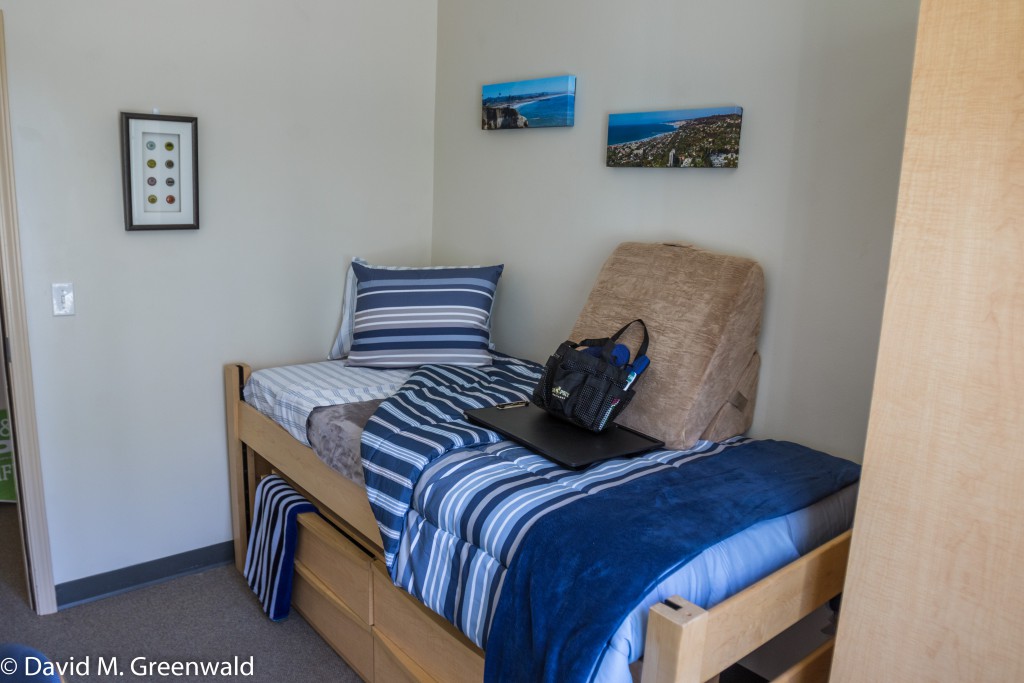 While it is an independent living space, it is not entirely like apartment life.  The students do not have to do their own cleaning – at least of the two restrooms that the unit shares.  They look kind of like hospital restrooms, but a cleaning service comes in to clean and supply the bathroom, and vacuum at least the common areas.  They can also order bedding and bath items through the university store.

The retail area was closed at this time, but it includes a post office, some small restaurants including a Jamba Juice, coffee, bagels and other small eating facilities. The guide noted that there is a store, but said that unless students are on some sort of plan, the cost is expensive. 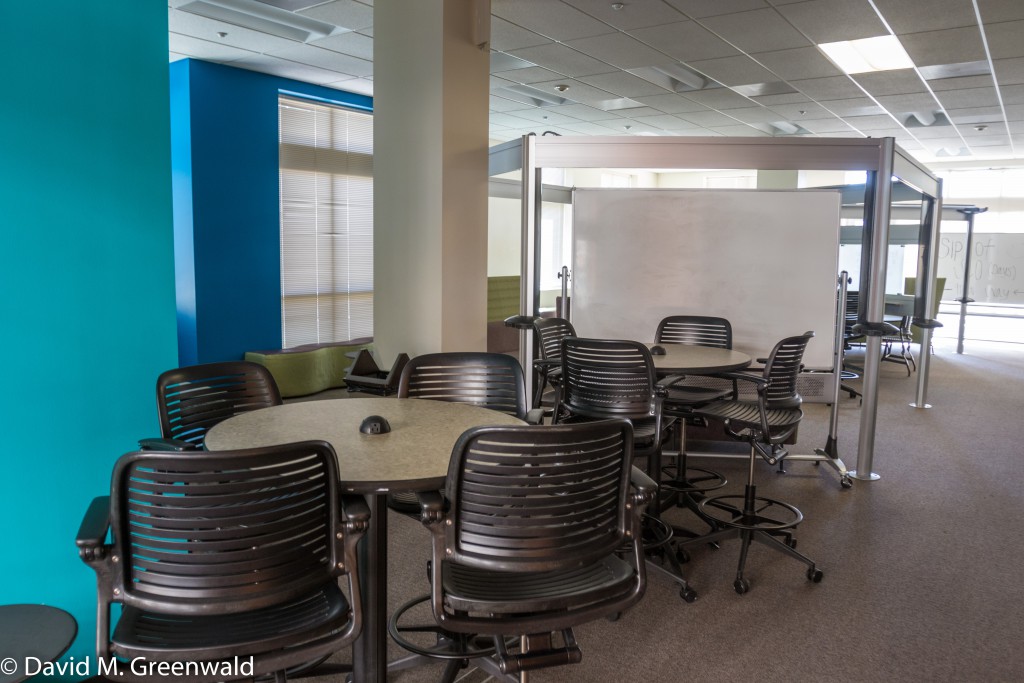 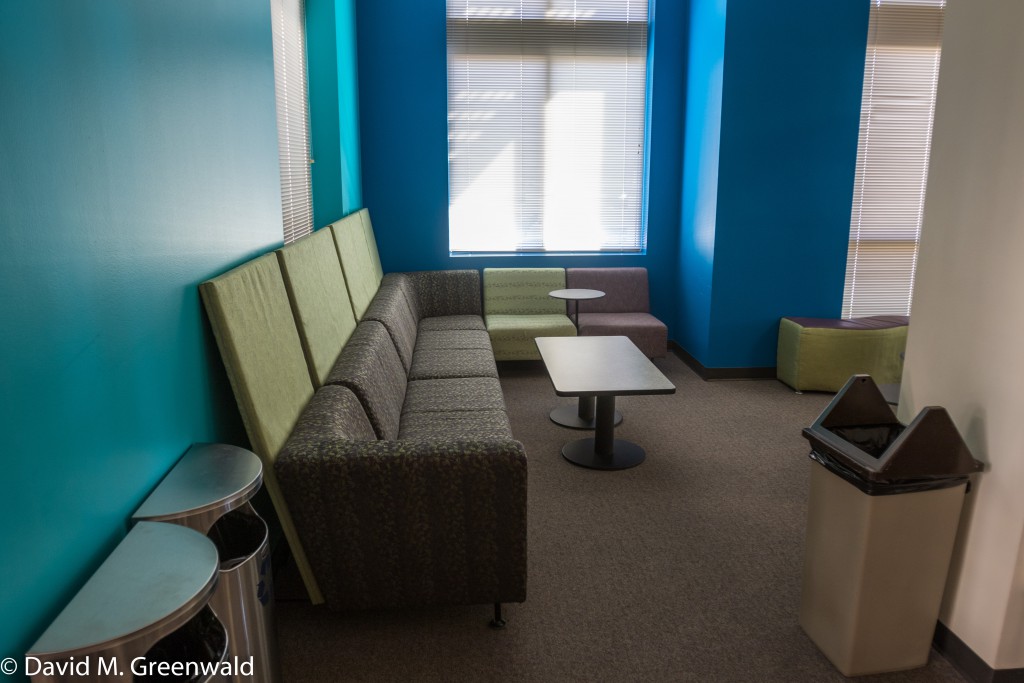 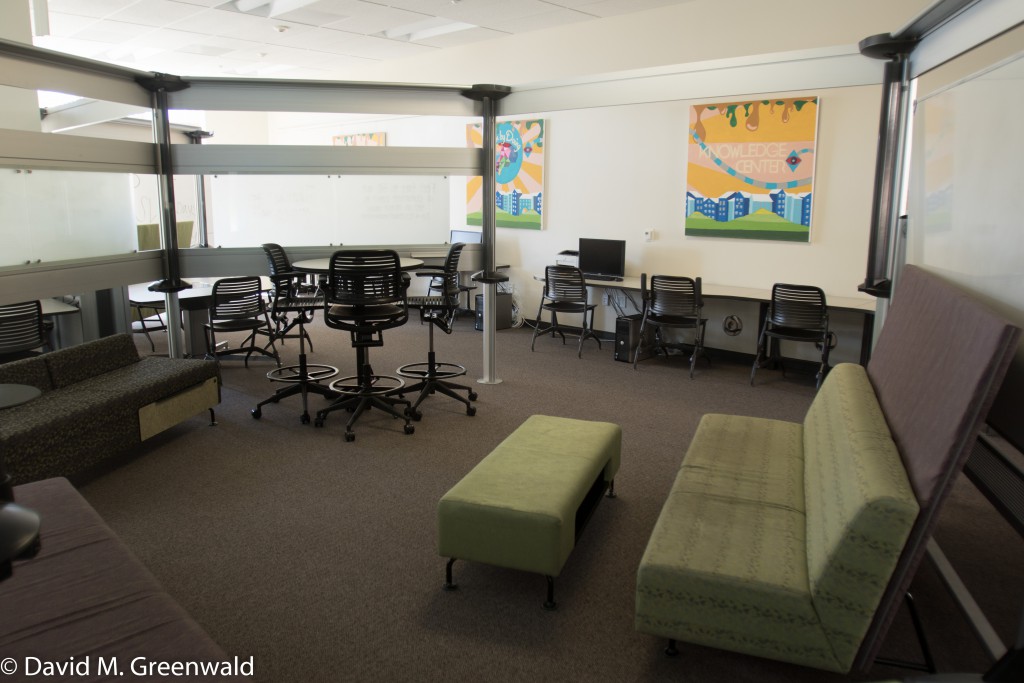 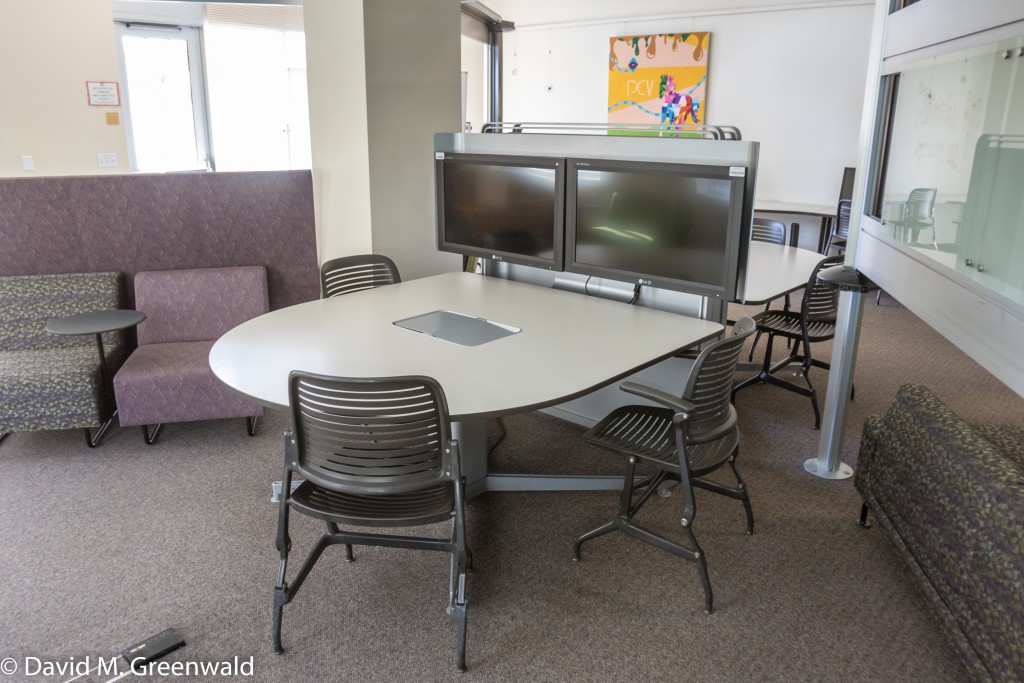 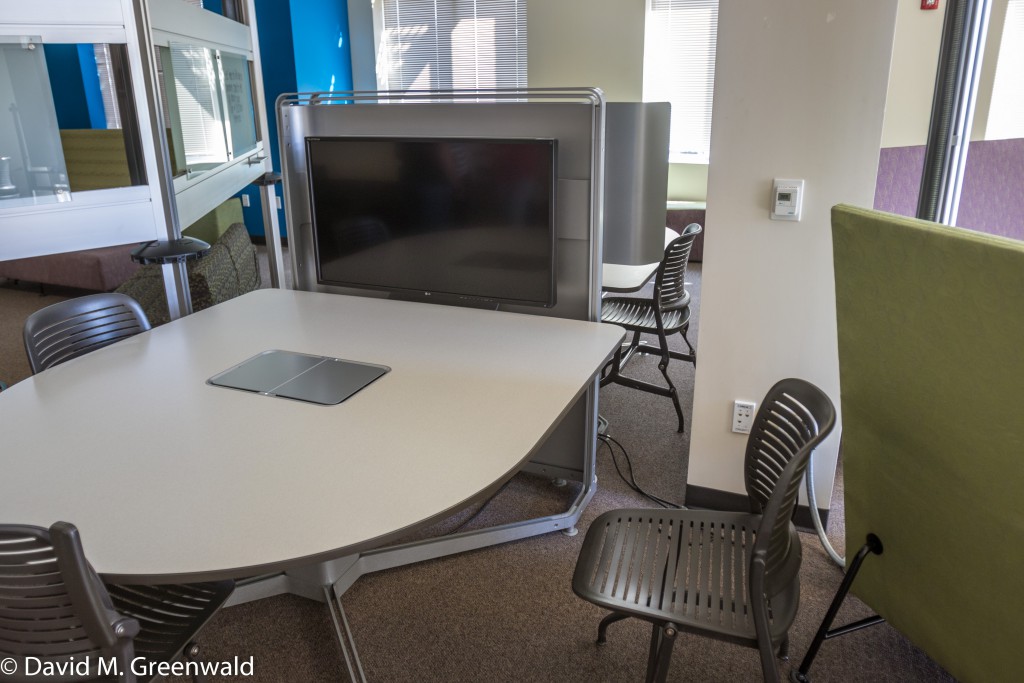 The entire facility has some common areas, as well, including a study lounge, complete with a variety of high-tech hook ups for computers and other communications devices.

There is also an more entertainment-focused common area that has TV, a piano, a pool table and ping pong table, a rudimentary exercise room, a swimming pool, and a volleyball area. 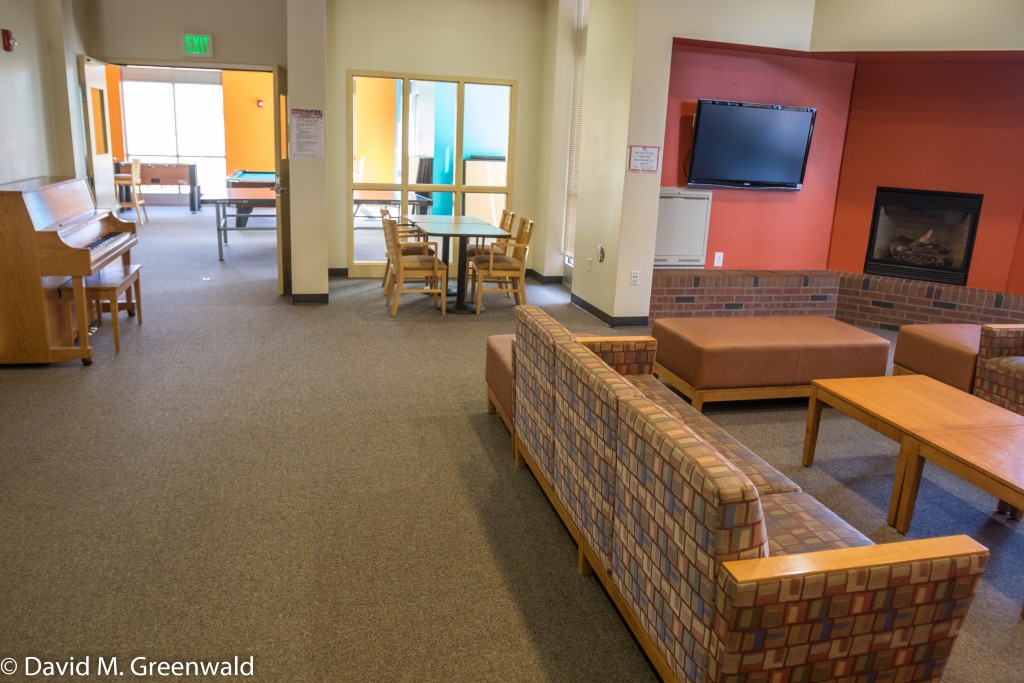 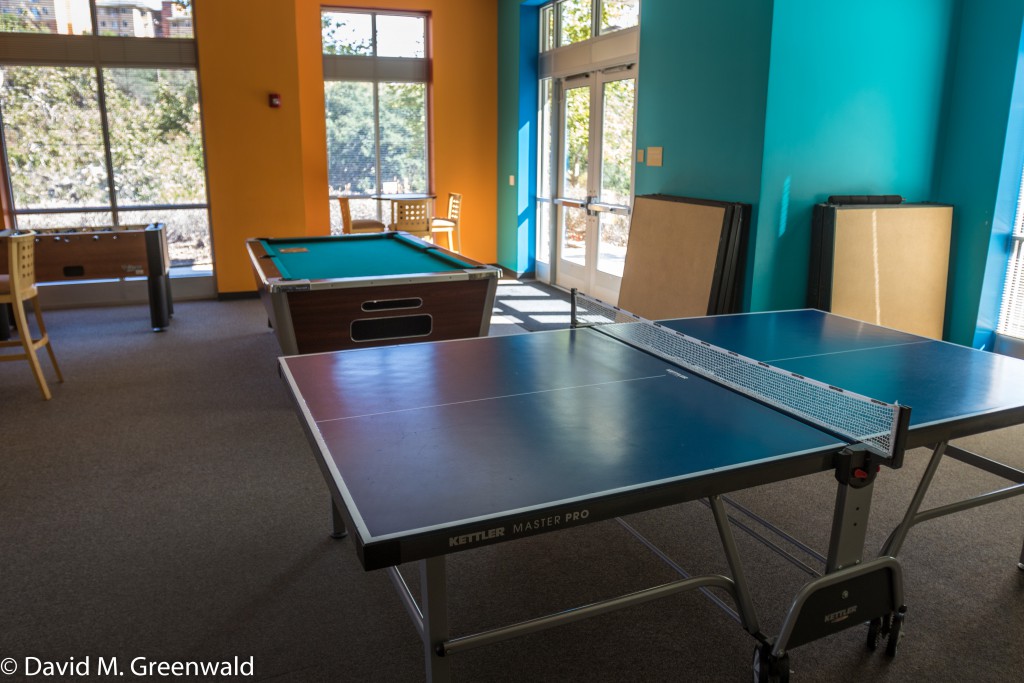 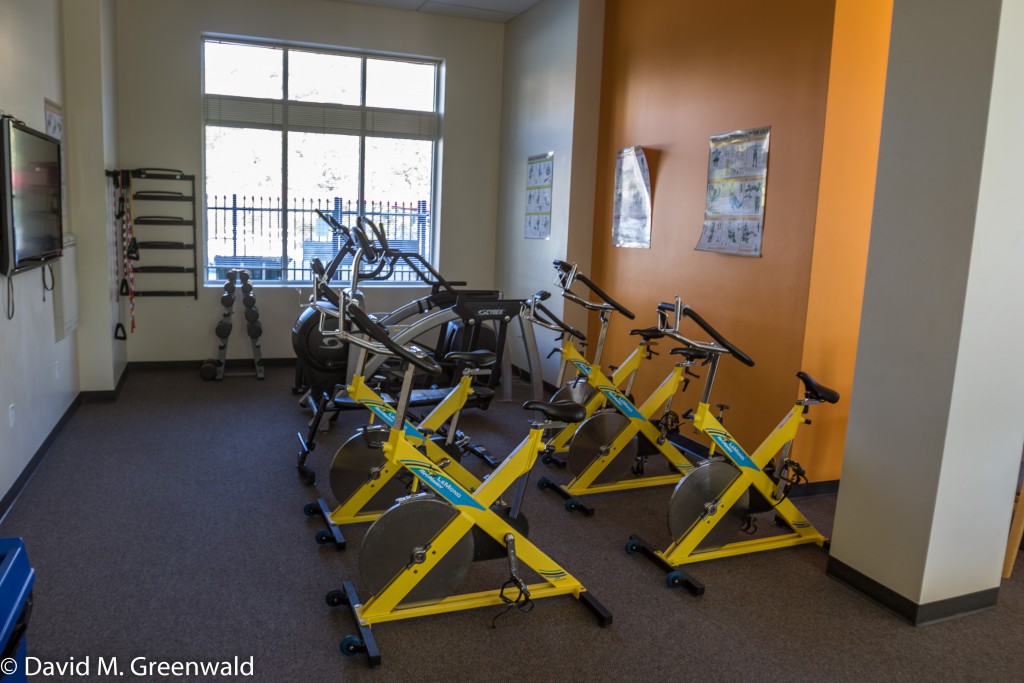 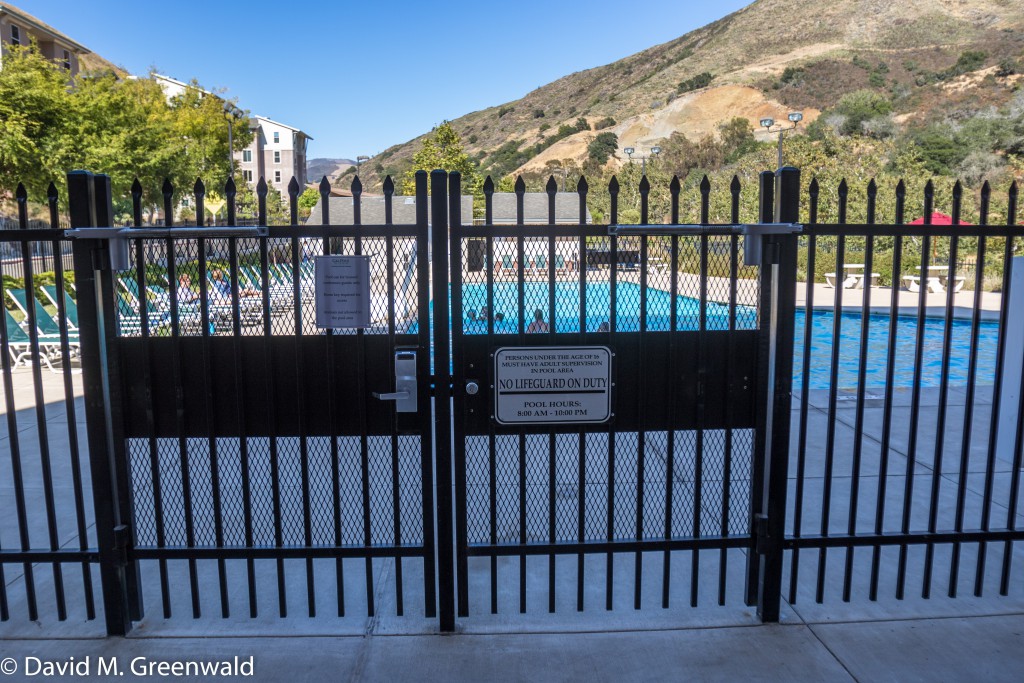 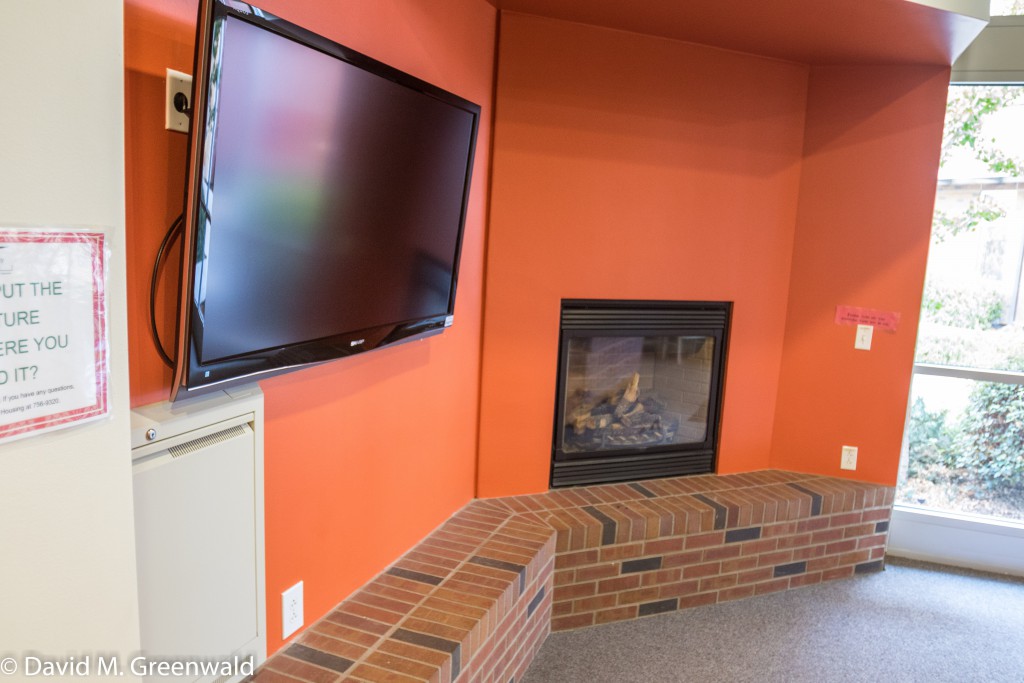 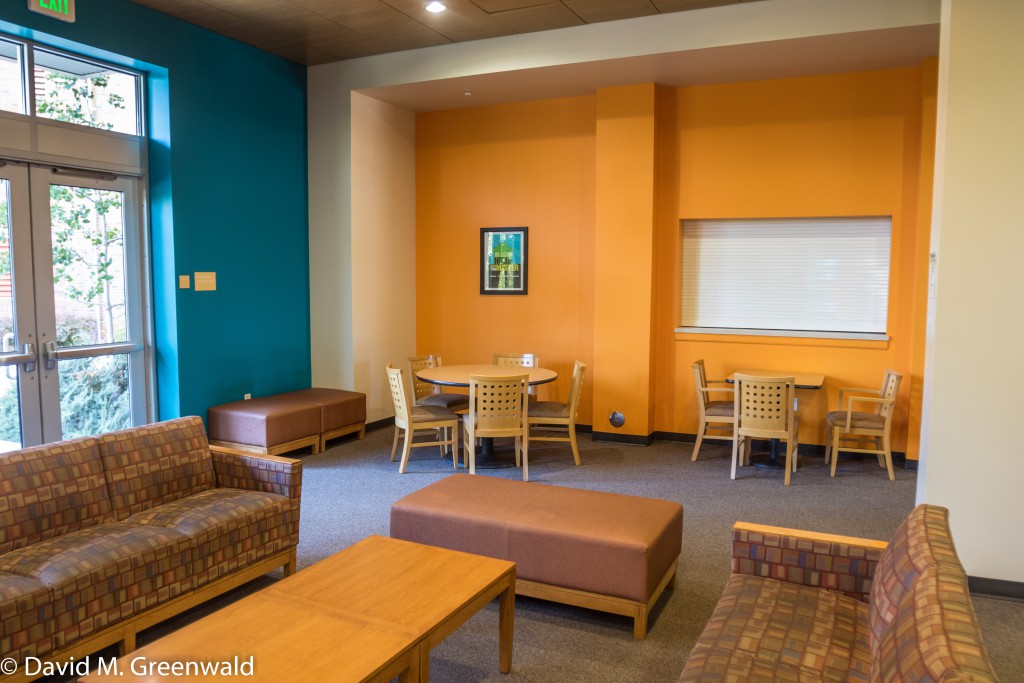 That was the extent of our tour. Obviously the living quarters are the bulk of PCV and most of those are similar to what we see on this tour.

And again, the specifics of what such an area could hold would depend on the university and developers.