This year the focus has shifted back toward housing and land use.  There have been a core of citizens that have argued that the solution to the city’s housing problem is for UC Davis to build more housing.

The argument has teeth – after all, the university has been steadily growing and yet has failed either to provide enough additional housing to cover the new students or to meet past obligations to increase the on-campus housing share. 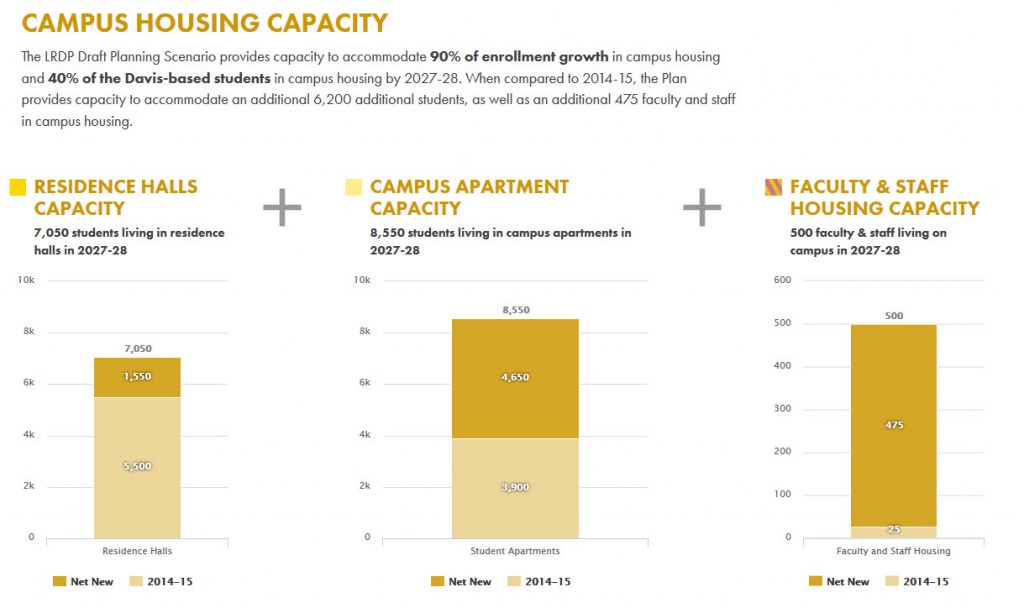 This spring, as Davis voters were deciding what to do about a Nishi housing proposal that would have provided about 1500 additional beds, UC Davis announced that they had moved from a position where they would be adding housing but not enough to accommodate new growth, to a position where they will accommodate about 90 percent of enrollment growth with campus housing.

There are several questions that come from this announcement.  First – what does this announcement look like?  Second, will the university follow through with their commitment (and how can we be sure, given unfulfilled promises)?  Third, even if they do follow through, what will the city need to do to accommodate existing and future demand?

We have a lot of newer information about just what this plan will look like.  The university is planning to accommodate 90 percent of enrollment growth with campus housing.  The plan provides capacity to accommodate about 6200 additional students by 2027-2028.  That means there will be somewhere between 6900 and 7000 new students in the next ten years.  That pushes the student enrollment at UC Davis to about 39,000.

Some people were dismissive of the plan, as it houses “just” 40 percent of all students on campus.  That puts the plan in line with future promises made in the 1980s, 1990s and into the early 2000s.  It certainly falls well short of Cal Poly’s commitment to house about 65 percent of its students on campus “as soon as possible.”

But if you look at UC schools, you see that 40 percent takes UC Davis from second to last in percentage of on-campus housing to below just Santa Cruz and Irvine and just ahead of Los Angeles, San Diego and Santa Barbara.  UC Davis would also be ahead of Berkeley, Merced, and Riverside.

That analysis, of course, ignores enrollment growth elsewhere and the likelihood of increased on-campus housing systemwide, but it puts things into perspective.

There will undoubtedly be people who will say that this is not enough, that UC Davis has a huge amount of land around it, that UC Davis needs to take a higher percentage of the new students and do more to house current students.

On the other hand, we should note that UC Davis has gone so far as to agree to MOUs to increase student housing on campus and failed to follow through.  Forty percent of all students and 90 percent of new students is ambitious, but not impossible.  Asking UC Davis to build more housing in ten years might be unrealistic.

The other new piece of information is that we now know that most of the housing will be non-residence hall housing.  UC Davis is planning to build about 1550 more beds in residence halls, increasing the number from a surprisingly low 5500 up to 7050.  Those figure to house freshmen students.

Still, the LRDP (Long Range Development Plan) does not solve all student housing problems in the city of Davis.  Let us assume that UC Davis follows through on what it has committed to here – historically, there is reason to treat these promises with skepticism.

First, the city’s current situation is not good for student housing.  We know there is a low vacancy rate, perhaps as low as 0.2 percent.  That has forced a number of students to commute from out of town.  It has also forced students to pack more tightly into homes, creating mini-dorms and nuisances for some neighbors.

As we know from the discussion last spring – rental rates are increasing, there are a core of landlords taking advantage of the situation, providing subpar housing, and there are other problems.

This plan by the university does not solve any of this.  In fact, we can argue it makes it worse.

By our math, there are 39,000 projected students by 2027.  The university plans to put about 15,600 on campus.  But that still leaves about 23,400 to live in the city.  In addition, that number is growing.  While the campus is planning to house 6200 new students on campus, that means there will be as many as 800 more students needing housing off-campus.

Also the faculty housing plan is very limited.  Right now the project is about 500 faculty and staff living on campus by 2027-28, but that means there will be about 1500 to 2000 new faculty and staff, coming to support the student enrollment growth, that will not be housed on campus.

Last summer the Vanguard argued that, based on current needs and future growth, Davis itself (even if the campus follows through on their plan) is probably going to need somewhere between 3000 and 4000 additional beds – some of which are probably going to house faculty and staff and will need to look more like single family homes than apartments.

Nishi would have provided 1500 of those beds, but it was defeated and, as we reported yesterday, UC Davis is not planning on a connection to campus.  There are varying interpretations on that, but that’s the current reality.

Proposed apartments like Sterling and Lincoln40 could provide between 1500 and 2000 new beds, so the problem is not overwhelming if the city is willing to consider a few more apartment complexes.

But there are those who believe UC Davis should house all of these new students and some of the needed capacity for current students.  That seems far less likely, but that is likely to be the battle that plays out in the course of the next decade.

108 thoughts on “Analysis: Additional Campus Housing Will Help but Will Not Solve Housing Problems”