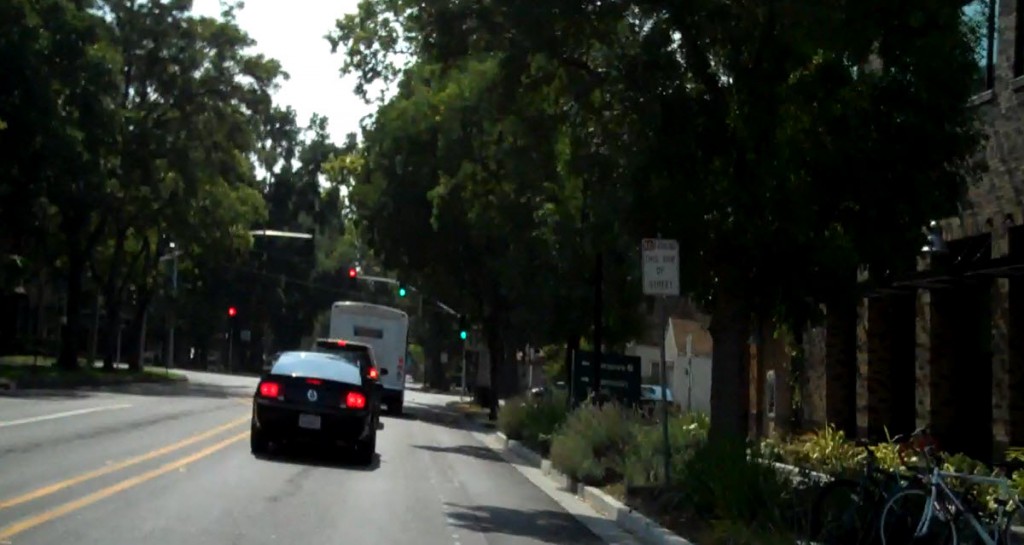 For next Tuesday’s city council meeting, city staff has analyzed the impact of the Fifth Street Corridor Reconfiguration, two years after the changes were implemented.  “Staff collected data on Fifth Street and adjacent streets before and after the reconfiguration to assess the impacts of the roadway redesign.”

The basic findings are that the daily traffic volume decreased by about 2000 from the two years prior to the change to the two years after the change.  Meanwhile, the collision rate, which does not include either driving under the influence or hitting a fixed object (as those are deemed unrelated to the change), increased from 3.5 collisions per million vehicle miles to 5.39.

While on the surface that might be seen as concerning, the actual data show that the number of collisions did increase from 24 between August 2012 and July 2014, up to 31 from August 2014 to July 2016.  The vehicle-on-vehicle collisions increased from 16 to 19 over those periods.  There was an increase of 7 to 10 of vehicle-on-bike collisions, and an increase of 0 to 1 of bike-on-pedestrian collisions.

But, in some ways, the bike collisions are expected.

In other words, given the much larger volume of traffic for bicycles, it should probably not come as a surprise to see a marked increase in collisions.

On the other hand, the vehicle collisions are something we should pay attention to.  Staff speculates, “The majority of the vehicle vs. vehicle collisions at the non-signalized intersections were ‘broadside,’ where the drivers from the side streets turned onto Fifth Street (mostly left turns). This may be due to the drivers’ impatience and accepting smaller gaps when vehicles are queued on Fifth Street.”

What this analysis does not tell us is the trend on both traffic rates and collisions.  In other words, two years is a long period of time to analyze.  We saw a good amount of change in a short period of time and, if most of the collisions were early in the period, perhaps the impacts will decrease over time.

Staff could provide the trend over the last two years, but they note, “Determining trends cannot be accurately assessed with two data points (before and after counts), and additional data collection over multiple years will provide a basis to better understand how travel patterns have changed. Staff is planning to do additional counts in November of this year and again in future years to provide more data to monitor the performance of the corridor. This data will allow Staff to plan for and prioritize possible future corridor enhancements.”

Anecdotally, there seemed to be an adjustment period when the changes were made, but, for the most part, we have not seen a lot of problems or heard a lot of complaints.  A few people who were skeptical of the change have seemed to believe it has been a success.

Staff notes, “At the Bicycling, Transportation, and Street Safety Committee (BTSSC) meeting on September 8, 2016, comments related to the need for more data collection to statistically be of value in assessing the performance of the corridor came up as well as when future improvements might be considered…”

In our view, the installation of lighting is something that the city could do.  However, the raised medians would cause a problem when buses stop, as they would not allow enough room for cars to pass on the left.

With the vehicle-on-vehicle collisions, one thing the city might consider is directing cars (much as they do for parking) toward F Street and G Street, where the intersections are signalized.  We have noticed instances where drivers of cars get a bit impatient.  However, even during peak hours it seems that the flow of traffic is not steady but rather in bursts, which allows for gaps in the traffic to be able to make left turns onto Fifth Street.