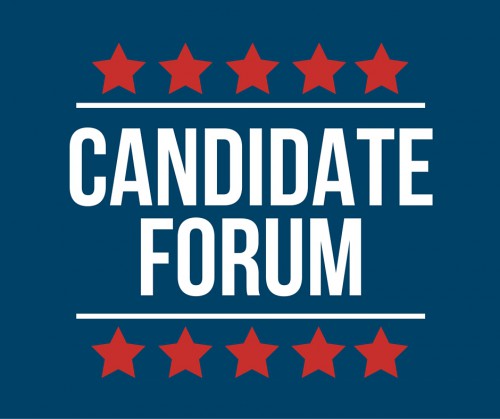 In addition to providing coverage, regularly, on the Davis Joint Unified School District (DJUSD) Board of Education, the Davis Vanguard has been committed to informing the community about the current school board race.

Up for grabs in the general election are two seats on the five-member board.

On Sunday night, all four candidates participated in the Vanguard’s School Board Candidates Forum, at the Community Chambers.

The first round of the forum included stages where each of the candidates read a question of their own and listened to the responses of the others, who were given an allotment of two minutes.

Once the candidates finished with their answers, the questioner received two minutes to give some insight about why they asked the question and provide an answer of their own.

Whatever challenge went unused in the first round was available in the next round, which was comprised of three questions posed by the Vanguard.

The first question was, “DJUSD is a district with average funding. It is disadvantaged by the LCFF formula due to the affluence of the district. That means that, effectively, the district receives less money from the state than other districts. How can a district with those constraints be able to provide the resources needed to produce excellence in education?”

Lovenburg, whose turn was next in the rotation, said she wanted to elaborate on what was included in the question – in terms of DJUSD being an averagely-funded district.

Regarding the state mechanism, the Local Control Funding Formula (LCFF), she explained that the district receives a base grant for every student and receives an additional amount of funding for high-need or at-risk students (English Learners, low socio-economic, foster youth and homeless youth).

Increasing the base grant for all California school districts should be a priority, according to Lovenburg.

In response to the question, asking how to provide resources needed to produce excellence, she said that is achieved through the Parcel Tax.

About the base grant, Poppenga said the state, unfortunately, does not fund public education well.

He also said that, with the information available, expect more of the same – if not worse.

Poppenga suggested one way to overcome the funding issue is for the school board, UC Davis and the City of Davis to collaborate and hire a professional grant writer, which he believes would be well worth the cost.

“I think we have to go for bigger grants,” said Poppenga, referencing a New York Times article that appeared in the Thursday edition, titled, “Brooklyn School and Nine Others Win $10 million Grants to Rethink Education.”

“And I think we should be in that mix,” he said. “The characterization is they are using time in very flexible ways, they are ensuring personalized learning using tech and time embedded with rigor. That’s what each of those schools that got that money have in common.”

When it came time for his answer, Fernandes, said, “What he said, and she said,” gesturing over to Poppenga and Lovenburg.

“I’m done now,” he said, laughing. “Because no, in all seriousness that’s the answer people. It’s everything. We need to be doing everything we can possibly be doing to increase the resources for the exact reasons they said.”

Fernandes agrees with the need for grant funding, but he also mentioned the opportunity for perhaps untapped state funding via Proposition 51, which he said includes a school facilities bond.

“We can get more money if we do a bond ourselves to enable ourselves to have matching funds,” said Fernandes. “It’s about thinking smart and about looking at the rules that the state has set forward to really maximize how we can increase sources outside of just merely our LCFF funding.”

Although the question was, in his words, “railroaded to justify the Parcel Taxes,” Granda said that he wants people to understand what the community is going through right now, and its confusion on details about the measure.

He questioned the state and the funding of its base grant, in the belief that all students are funded the same way – so calling Davis disadvantaged is, to him, considered incorrect.

“If I am on this leadership team, I’m not going to be looking sideways to see where I’m going and that’s exactly what they’re doing here,” Granda said. “Because the other districts are funded because they have other needs and they have other kinds of students. They have poor students and they have English Learners, well that money is going to that, and of course it’s going to have more money.”

Using her one-minute challenge answer, Lovenburg said the type of grants that Bob and Jose touched on were for high-needs districts, which Davis is not.

In response to her comment about renewing the Parcel Tax, Granda addressed Lovenburg, using a minute challenge answer of his own.

“Susan, I really have an issue with what you said,” Granda said. “You said renew…what it means is to do it over with what you have. That’s not what the district is doing right now.”

Granda added: “The first thing you did, instead of the $531 that both of those measures produced, you raised it to $620, a 17 percent increase with no justification whatsoever. And then they doubled the time, the time that the measure lasts. So they doubled the amount, so now you pay…if you vote for Measure H you better pay those $5,000 because that’s the result of doubling the tax, plus a 17 percent increase.”

Lovenburg opted to use her 30-second challenge answer, re-emphasizing the point that the funding provided by Measure H would keep the programs in place that are being funded by Measures C and E.

“The difference is that we can no longer assess a multi-family rate and, Jose, you know that because you were involved in the lawsuit that required the district to change the way we structure the tax,” she said. “So I find it disingenuous that you’re raising this as a concern now.”