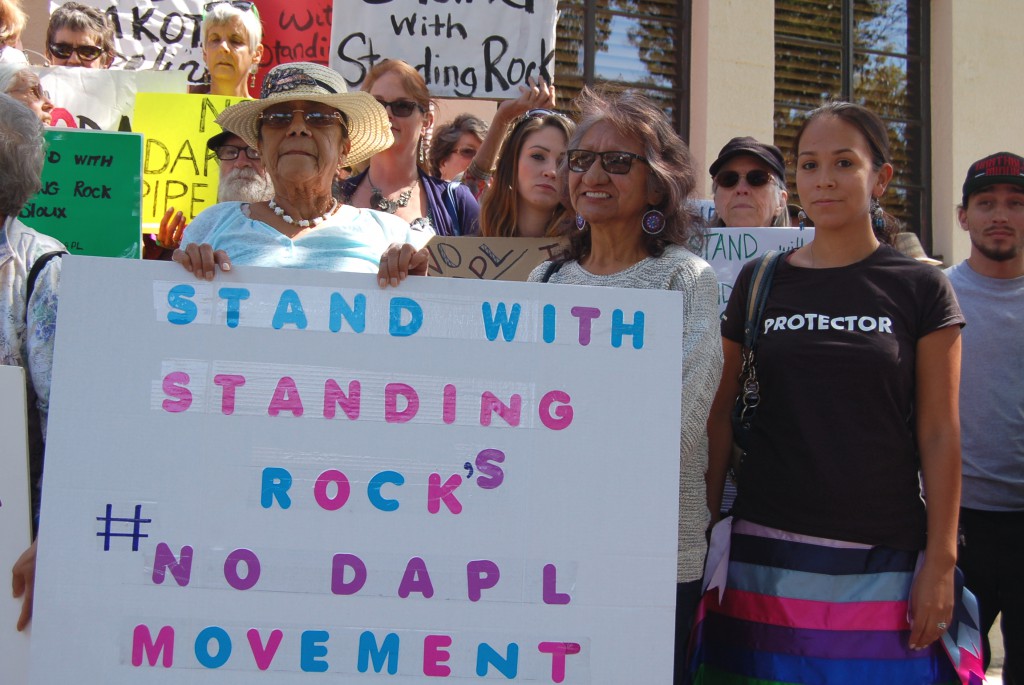 More than 60 people gathered downtown at lunchtime in Davis on Tuesday (Sept. 13) to send a resounding message of solidarity to the Standing Rock Sioux Nation in North Dakota who are fighting to protect the Missouri River from potential leaks from the North Dakota Access Pipeline. Davis was one of around 200 communities across the US – and even worldwide – to hold rallies to call for the pipeline to be permanently stopped.

Carol Standing Elk, a Lakota elder from Sisseton, South Dakota who now lives in Davis, brought everyone together into a circle with the burning of sage. UC Davis graduate and member of the Ft. Peck Assiniboine and Sioux tribes, Jessa Rae Growing Thunder then led a prayer before leading the group onto the streets in a march. Brandishing banners, “Water is Life,” “I stand with Standing Rock,” “Respect Native Rights,” the group marched along 2nd Street to E Street Plaza.

Jessa Rae Growing Thunder thanked all those who attended. She shared a powerful story of a dream she had had in which her grandmothers showed her water and what would happen to it. The dream showed the pain it would cause but also the strength and resistance it would awaken. “We have what it takes to change our future,” she said. “But we can’t do it alone, which is why today is so powerful.”

Nick Buxton said the struggle of the Standing Rock Sioux is a fight for all of us because Native Americans are both protecting water, the source of life, and by resisting oil expansion are protecting the planet from climate change. “The historic gathering and unity of the first nations of this country is exciting, but it also demands our support, given our country’s dark history in which native rights have been repressed and marginalised. Our liberation is tied up with the liberation of Native Americans.”

In the evening, a number from the march took a resolution to the City Council to discuss that it would express the city’s opposition to the Dakota Access Pipeline and to support the struggle for indigenous sovereignty and environmental justice.