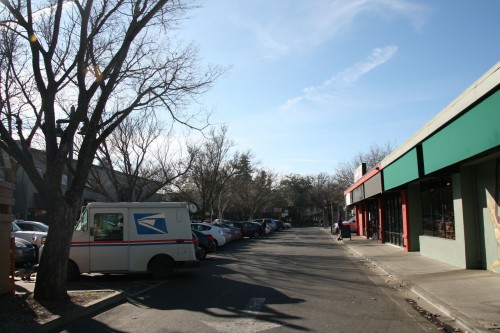 The City has begun a process of redoing major parts of its general plan. And downtown is a major focus, one of council’s top 8 goals.

But instead of just “coloring within the line,” using the existing planning methodology, council is exploring a new way that might encourage new investment by front-ending more land use decisions in the general plan, thus allowing more streamlining of approval of projects.  This new method, Form Based (zoning) Code, will be discussed at Tuesday’s council meeting.

Downtown as an Underachiever

We love our downtown.  It has an amazing amount of street life compared to any other city in the region—short of midtown Sacramento—and has, comparable to that of many malls,  foot traffic which retailers pay a premium to be exposed to.  We love being downtown where we can have random meet ups with friends at a yogurt shop or coffee shops, or at our amazing Davis Farmers’ Market 2 days a week.

Yet investors and existing land owners seem to have given up on harvesting this value by building more office/retail or housing here.  Most of our downtown structures are old and run down.  Very few building are 2 stories, much less 3 or more floors.  We still have a landlord milking cash out of a low-density fast food restaurant building that barely covers 1/5 of his valuable downtown land (providing no sales tax to the city while it creates traffic and GHG from idling cars). Even our one major retailer, Ace Hardware, seems content to remain housed in 3 aging prefabricated metal structures of the type often used on farms.

There are few “class-one” office buildings and few downtown apartments to meet the demand of people who want to downsize and drive less but still stay in Davis.

Something is not working to attract investment or encourage existing business to expand to meet an obvious demand, or to utilize the existing foot traffic to create a crucial mass of downtown retailing (and national mall stores with their sales tax revenue) that the cities of Santa Cruz and San Luis Obispo have managed.

Now Watermelon Music is leaving downtown—the 2nd major retailer to leave in the last 6 months, and the alarm bells are ringing for all to hear.

Our downtown is becoming a place of Bars, Baristas and Banks.

Though there are many issues, one of the barriers to investment in infill projects is the political uncertainty caused by the city process of land use regulation.

Any downtown site will be surrounded by existing residents, tenants and structures, and they have an interest—often parochial and self-centered—about what is built near them.  In the ideal world, what you should be able to build—and not build—on a piece of property should be well defined in advance by a consensus about the general public good.  However, due to the age and complexity of city regulations, it is in reality almost impossible to build something new that would be economically viable as an infill project without asking for “exceptions” and “conditional uses.”  This forces the investor into a political area to ask for “exceptions” and into having to battle neighbors with their real, and idiosyncratic, needs in the political arena to get approval of these “exceptions,” which in fact are the rule.

This lengthens the time to complete a project, and adds considerable uncertainly to its outcome. Even with most “open for business” staff and council, the obstacles will remain due to the process forced on us by the regulation style we have chosen.

If we could just revise our regulation to offer more clarity to potential investors—and to clarify the essential interests of neighbors—it would reduce the politics of infill development AND encourage investment.  A Win-Win.

As part of exploring this new “style” of zoning for our downtown, the city council has asked Daniel Parolek to return to Davis to share ideas on Zoning Reform. He will be making a presentation Tuesday 7pm, City Council meeting.

Daniel will describe how other cities have used Form Based Zoning Codes as a tool to facilitate public involvement yet offer more flexibility and certainty for developers. It is being investigated as a method to jump start a revision of the city’s general plan as a way to encourage reinvestment in our downtown. Dan Parolek and Tony Perez will do about a 45-minute presentation which will be followed by 45 minutes of Q&A.   The city has invited the Planning Commissioners and the Chamber and Davis Downtown, and members of the public are encouraged to attend.

This tool has helped the cities of Benicia and Petaluma, and others throughout the U.S. have preserved their historic character while stimulating growth via this new tool.  By front-end loading in the general plan zoning more of how we want building to interact with the greater community, the investors have less uncertainty, when they propose a project, that they can accomplish it.

Two of the city council who heard Daniel speak in Davis in May at a Davis Futures Forum event have asked him to return to do a full workshop on Tuesday for council as well as the Planning Commission. The Davis Futures Forum speaker series had  previously brought city planners Chuck Minicozzi and Chuck Marohn to town.

Share:
Tags:Davis DowntownForm-Based Codes
Previous : Sunday Commentary: Is Good Planning Even Possible in This Toxic Atmosphere?
Next : Monday Morning Thoughts: What Does Progressive Mean in Davis These Days?

29 thoughts on “Downtown Davis: Avoiding a Fate of Bars, Baristas and Banks?”