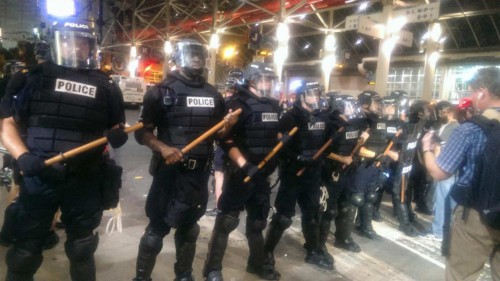 While there was some frustration expressed in the media about the effectiveness of body worn cameras, it is important to understand that videoing police incidents is just one tool and not the answer to officer-involved shootings.  The two recent police incidents, one in Charlotte and one in Tulsa, bear that out.

In the Tulsa, Oklahoma, case, the video is pretty clear.  Terence Crutcher was shot with his hands up, police did not find a weapon on Mr. Crutcher or in his care.  As a result, Officer Betty Shelby has been charged with first-degree manslaughter.

“In the matter of the death of Terence Crutcher, I determined that the filing of the felony crime of manslaughter in the first degree against Tulsa police officer Betty Shelby is warranted,” Tulsa County District Attorney Steve Kunzweiler announced Thursday.

The video is critical here, because the police department’s initial public claim was that Mr. Crutcher had failed to comply with officers’ demands, but the video showed Mr. Crutcher was holding his hands above his head as he was instructed to do so.  He was walking toward his car, which had stalled in the middle of the road.

There are two key points to make here.  First, this case shows a clear value of cameras when discerning what happened in a critical incident.  Second, if you want to know why we are skeptical about police claims about incidents without video, this is it.  This is another case where the police account is at variance with what the camera shows.

Unfortunately, the Keith Scott killing in Charlotte, North Carolina, is far less clear cut.  There is video of the incident but, on Thursday, Chief Kerr Putney said that the video was not definitive.  “The video does not give me absolute, definitive, visual evidence that would confirm that a person is pointing a gun,” Chief Putney said at a news conference.  However, he did say that witness accounts and evidence suggest that this is what happened.

The public will not be shown this video, but family members saw it Thursday and have a very different take than the police – and they believe that the videos should be made public.

Police claim that Mr. Scott, 43, was shot after he got out of his car brandishing a gun.

The family’s attorney, speaking on their behalf, had a different take.

“When told by police to exit his vehicle, Mr. Scott did so in a very calm, non-aggressive manner,” Attorney Justin Bamberg said. “While police did give him several commands, he did not aggressively approach them or raise his hands at members of law enforcement at any time.” When an officer opened fire, he added, “Mr. Scott’s hands were by his side, and he was slowly walking backwards.”

Until they viewed the video, the family was not certain that the video was going to be released.  The family did agree with Chief Putney that the video was inconclusive.  “It is impossible to discern from the videos what, if anything, Mr. Scott is holding in his hands,” they said in a statement.

Some have been critical of protests and riots in Charlotte, but as always there is a back story.  As William Barber writes for NBC News, “There is much we do not know. But there is unrest in Charlotte because of what we do know.”

We know, whatever the facts, that the law protects the officer, not the victim, in cases like this. Three years ago, a Charlotte officer shot and killed Jonathan Ferrell, an unarmed black man who was asking for help after his car broke down.

The Movement for Black Lives led peaceful protests, and the state conference of the NAACP insisted on due process. The case ended in a hung jury. The attorney general’s office denied our request for a re-trial.

There is unrest in Charlotte because of what we know. We know that the law, as written and enforced, cannot protect us from police violence. We know Darryl Hunt and Henry McCollum, two in a long list of African-American men wrongfully convicted in this state. We know our criminal justice system does not function to protect black life, but to control it.

He also pointed out the tremendous poverty and income inequality in Charlotte.

True, there are things about the Scott case that we do not know. But it’s the injustices we do know—the facts on the ground that are choking the life out of black and brown communities—that created what we see in Charlotte this week.

Some say we must condemn the unrest in Charlotte. As a pastor and as an organizer, I do not condone violence. I suspect that much of it has been instigated by provocateurs with their own agenda. But to condemn the uprising in Charlotte would be to condemn a man for thrashing when someone is trying to drown him.

Whatever righteous indignation the public can muster ought to be directed toward the systems that created a situation where a man can drive to the bus stop to pick up his son and end up dead before he gets there.

I am a pastor. I will not condemn grief. But I was trained as a lifeguard, and I learned a long time ago that when people are drowning, their instincts can kill them and anyone who tries to help them. If a lifeguard can get to a drowning person, the first thing the lifeguard says is, “Stop struggling. Let me hold you up in this water, and we can get to the shore together.”

The riots in Charlotte are the predictable response of human beings who are drowning in systemic injustice. We must all pray that no one else gets hurt. But we must understand why this is happening.

Unfortunately, police cameras do not always give us answers.  That appears to be the case here.  What is clear is that Charlotte has become the next city to face these kinds of questions and challenges in the wake of the death of a black man at the hands of police.

38 thoughts on “Justice Watch: A Tale of Two Police Shootings”