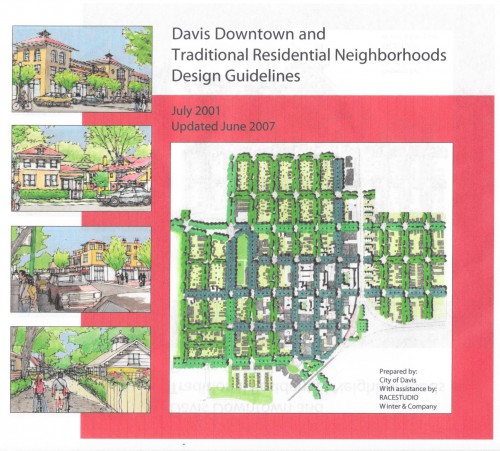 The Trackside Partners have announced a new proposal for the re-development of the Trackside center at 3rd St. and the railroad tracks. They have stated they will submit a plan for a 4-story building. A four-story building that covers almost their entire lot.

If built, it would be one of the biggest buildings downtown. Except that it is not located downtown. It is located in the Old East Davis Neighborhood.

A few decades ago a large portion of the Old East Davis Neighborhood was threatened with destruction. The neighbors got together, they fought the development and with broad community support and input from all stake-holders, came up with a plan that would allow change, densification, re-development, and mixed-use building, yet preserve the traditional neighborhoods. Eventually, the Davis Downtown and Traditional Residential Neighborhoods Design Guidelines were born (aka the Design Guidelines).

Recently, several speakers have been invited to speak in Davis regarding city planning. They have spoken of densification, in-fill, form-based code, strong towns and “not losing your soul.” Ask people what they like about Davis and they will say they like the “small-town feel.” They like the traditional neighborhoods. They like the soul of Davis.

The Design Guidelines allow redevelopment, change, and densification. They are form-based code so that mixed-use, residential and retail can coexist to make a vibrant community. They allow developers and neighbors to know what to expect and they do this in a way that retains the character of the neighborhoods of Davis. They allow change without loosing our soul.

But, if that doesn’t fit your business model, we also have the Planned Development. Planned Developments are being proposed all over Davis. In a term that must certainly win awards for political spin, a Planned Development defines the zoning as, “whatever gets approved and built.” It is the building first and the zoning after. It ignores the existing zoning, the City General Plan, and the Design Guidelines and is… whatever the developer wants and the City Council approves.