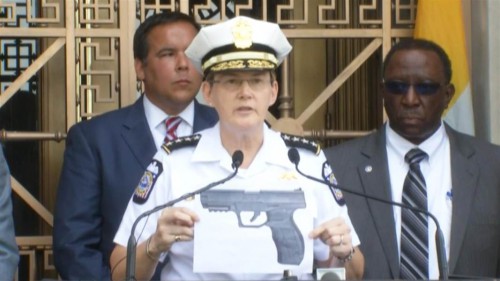 The death of Tyre King has spawned a number of questions and a debate.  The 13-year-old was shot after he was in a group of people who used a BB gun, that reportedly looked like a real gun, to rob people and then took off running when the police came.

While the police chief of Columbus held up a photo of the gun to demonstrate how real the gun looked, critical details were missing from the actual incident.  The dispatch reported that, while Tyre King removed the gun from his waistband when Officer Bryan Mason chased him, “[i]t’s unclear whether the teen pointed what turned out to be a BB gun at anyone or even raised it.”

Police were responding to a 911 call claiming that a man had been robbed of $10 by armed teens and one of the suspects was carrying a Ruger pistol, which turned out to be a BB gun.

Current use of force guidelines follow from the 1989 Supreme Court decision in Graham v. Connor, which held that the appropriateness of use of force by officers “must be judged from the perspective of a reasonable officer on the scene, rather than with the 20/20 vision of hindsight.… The calculus of reasonableness must embody allowance for the fact that police officers are often forced to make split-second judgments—in circumstances that are tense, uncertain, and rapidly evolving—about the amount of force that is necessary in a particular situation.”

Clearly, the police are being asked to make split-second decisions in dynamic and evolving confrontations.

A 1985 Supreme Court case, Tennessee v. Garner, limited when the police could shoot at fleeing suspects, limiting that to times when “the officer reasonably believes that the individual poses a significant physical danger to the officer or others in the community.”

“You don’t shoot fleeing felons. You apprehend them unless there are exigent circumstances — emergencies — that require urgent police action to safeguard the community as a whole,” said Greg Gilbertson, a police practices expert and criminal justice professor at Centralia College in Washington State, in a 2015 interview following the shooting of Walter Scott by Officer Michael Slager in South Carolina.

While an investigation may find that the Tyre King shooting was reasonable under the law, I remain troubled by some of the responses I have seen – after all, we are talking about a 13-year-old who, it turned out, was not armed with an actual gun.

The police chief got up on TV with the photo of the gun as though to act as an immediate defense attorney before her department had completed its investigation.  There is no video of the incident that we know of.

In two fatal shootings, video played a huge role in showing that the use of force by officers was not reasonable.  In the 2014 shooting of Laquan McDonald in Chicago, the officers’ accounts were found to be divergent from the video that emerged – so divergent that not only was the shooter charged with murder, as many as ten officers may lose their jobs over it.

The aforementioned shooting of Walter Scott was initially deemed justified, until a cell phone camera video emerged showing that not only did the officer fire at a fleeing Mr. Scott, but he planted evidence to back up his story that the individual reached for his Taser – something the video contradicts.

This week, the Chicago Tribune issued forth a major new investigation that found, “At least 14 times since 2010, Chicago police officers shot someone and said they thought the person had a gun, though police ultimately never found one. That, in turn, opened up the city to millions of dollars in legal claims, according to public records.

“Those shootings, in which police said the victim had a gun but one was never found, resulted in seven deaths,” they write.  “Although none of them had guns, six people who survived the shootings were nevertheless charged with aggravated assault of a police officer. Four were either found not guilty or convicted of a lesser crime. One person shot by police, a paramedic, was not charged.”

The last two years have seen police agencies across the country begin to reexamine their use of force policies.  In their guiding principles, PERF (Police Executive Research Forum), a research organization for law enforcement, argued, “The sanctity of human life should be at the heart of everything an agency does.”

Agencies have taken the positions that “the application of deadly force is a measure to be employed in the most extreme circumstances.”  At the same time, PERF argues that agencies need to develop policies that treat the requirements under Graham as “minimum requirements.”

PERF writes, “Graham v. Connor is the common denominator across the United States, and all police agencies must have use-of-force policies that meet Graham’s standards. But many police departments have chosen to go beyond the bare requirements of Graham, by adopting more detailed policies and training on issues such as shooting at moving vehicles, rules on pursuits, guidelines on the use of Electronic Control Weapons, and other use-of-force issues, that are not mentioned in or required by Graham.

“Similarly, many police agencies have policies, practices, and training on issues such as de-escalation and crisis intervention strategies, while others do not. Graham v. Connor allows for significant variations in police agencies’ individual policies and practices.

“This guiding principle does not suggest that agencies should somehow disregard Graham v. Connor; that would be impossible. Rather, it encourages agencies to build on the legal foundation established by the Supreme Court and implement best policies, practices, and training that provide more concrete guidance to officers on how to carry out the legal standard.

“In this report, PERF recommends a number of policies that, while not currently required by the Supreme Court’s standard, should be considered nonetheless, in the view of leading PERF chiefs. Many of these polices have already been adopted in some departments, including a duty to intervene if officers witness colleagues using excessive or unnecessary force; requiring officers to render first aid to subjects who have been injured as a result of police actions; prohibiting use of deadly force against persons who pose a danger only to themselves; and specific limits on shooting at vehicles. By adopting these and other policies, departments can take steps that help prevent officers from being placed in situations where they have no choice but to make split-second decisions that may result in injuries or death to themselves or others.”

In our view, the outcome in Columbus should be treated as unacceptable – a 13-year-old kid was killed.  He used incredibly poor judgment both in using a BB gun to rob people and then fleeing from the police, but at the end of the day, he is a kid.  The question that I think we must ask ourselves is how his death could have been prevented.

Whether the officer acted justifiably or not, he is going to live with his decision for the rest of his life, and second-guess himself.  The family of the victim is going to live with the loss.  A 13-year-old did not get a chance to grow up or learn from his mistakes – and they were grave ones, to be sure.