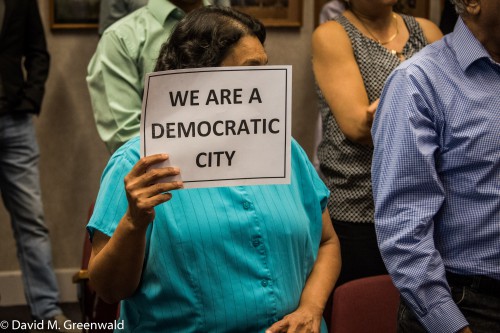 I first met Robb Davis, other than in passing, in December 2011.  The pepper spray incident on the UCD campus had just occurred and, while the community at the time was looking for “blood” – at least metaphorical blood – Robb Davis had another idea.

He, David Breaux, and the Rev. Kristin Stoneking came to a Human Relations Commission meeting, of which I was a member, and proposed the idea of a restorative justice process as a way to reconcile the hurt of the protesters and the community with the harm done by the university.

At that point, I had never heard of restorative justice, and I was skeptical of the concept.  But Robb Davis won me over with passion and compassion on the issue, and I began to learn about restorative justice.  I was impressed enough with Robb Davis that just six months later, I asked him to join the fledgling Vanguard Editorial Board.

I became impressed enough with the concept that, in January 2013, we asked Sujatha Baliga to be keynote speaker for the City’s MLK event and, that fall, we had Judge David Gottlieb as keynote speaker for the Annual Vanguard Court Watch Dinner, talking about the Fresno County juvenile restorative justice program through the courts.

Restorative justice is just one form of conflict resolution – a core concept that Robb Davis brings now five years later, as he begins his two-year term as Mayor of Davis.

It therefore should not be a surprise that Robb Davis would be committed to conflict resolution or that that commitment might be tested in his first regular meeting where he presided as mayor.  But a Gandhi statue?

I will be the first to say, I was none too pleased to have been at council chambers covering a debate over the issue of a Gandhi statue or the historical treatment of Gandhi at a Davis City Council meeting until the wee hours of the morning.  Wednesday was a lost day for me due to no sleep the night before.

I will be honest.  Gandhi is one of my heroes.  I read his work and teachings rather closely following undergraduate school.  I think the tactics of non-violent civil disobedience as practices in the US civil rights movement, inspired by Gandhi, were extremely powerful.

I also have to admit that some of the comments made about Gandhi were extremely hurtful to me.

Sean Raycraft, one of my current editorial board members, made what I think is a critical point when he countered that he did not previously know many of the controversial things that Gandhi had done, and “these larger than life historical figures are often mischaracterized by history in the narrative.”  “Historical figures need to be humanized,” he said.  He asked that there be “some consideration as to humanizing the man, and not mythologizing the man.”

This is an important perspective.  We tend to forget that historical figures were, in fact, just people.  They were flawed.  They made mistakes.  And they were products of their own time.

We need to address each of these points.  First, as much as many respect Martin Luther King and what he was able to accomplish – during his own time, he was extremely polarizing.  Not only did the white establishment despise him, but he was considered a traitor, he was considered by some a communist, and he was the most reviled man in the country by many.

Even the black community was somewhat split – some considered him a hero, but others questioned his tactics and thought he was moving too slowly.

Moreover, he made mistakes.  The FBI was monitoring him and discovered that he had extra-marital affairs.

The point here is that MLK was a man, he made mistakes and he was a polarizing figure in his own time – even if he has become a near universal symbol for peace and racial and social justice today.

Secondly, we need to understand that historical figures lived in their own time.  Thomas Jefferson owned slaves.  The founding fathers wrote slavery into the Constitution.  Woodrow Wilson was a virulent racist.  Should we judge these figures based on modern day mores or should we judge them by the good deeds they performed in their times?

On Tuesday, we heard from people that Gandhi was a bigot, a sexual predator, and an enforcer of the discriminatory caste system.  There are some justifications for some of those views, however, I was searching for some on the net and found a surprising little amount of mainstream sources on some of it.

At the same time, I think we need to understand that much of anger in the Sikh community is not about Gandhi at all, or at least Mahatma Gandhi.  Much of the anger goes back more than 30 years to 1984 where there were a series of anti-Sikh riots, massacres and attempted genocide against Sikhs in India.

These were directed by the government and the Congress Party in response to the assassination of Indira Gandhi (no relation) by her Sikh bodyguards.  While the government claims there were about 2800 deaths across India, some sources put that number as far higher – perhaps 8000.

As we discovered with the Israeli-Palistinian debate from 2009, Davis is not going to be able to resolve longstanding problems that divide us – even within our community.  In this case, the statue of Gandhi in the park served as a much broader springboard for an issue that clearly has resonance –even if many of the people who came to speak were from the broader region, not Davis.

I am not sure that three hours of public comment were the way to go about this process – if anything, it seemed that it only made both sides dig in more.  I think I would have preferred allowing the HRC to take on this issue rather than using council time.

But there were clear differences, even on council itself – reflected in the 3-2 split.  From Robb Davis’ perspective, in order to create the urgency for conflict resolution, the conflict had to be real.  From the perspective of others on the council, notably Rochelle Swanson, this simply put Davis back into the “weird Davis” light (not her words), made the broader community question how serious Davis is, and created a real crisis with the Indian Government that had to be rectified.

The problem I have is that, after talking with both Rochelle Swanson and Robb Davis, they have very different views about the needs for this community – at least on this issue they seem to respect each other, but there is no clear way to bridge the gulf here.  I actually respect and agree with both them.  I can see and respect both sides here, but I have no answers.

At the end of the day, just as we have learned from the Israeli-Palestinian issue at City Hall, and the Vanguard has learned to focus more on local issues than national ones, I think the council needs to recognize more clearly its strengths, what it can do and what is simply too large a bite for it to take on.

Robb Davis saw this as an opportunity to see where conflict resolution can get us – others see this as a distraction from the pressing needs of this community.

34 thoughts on “Sunday Commentary: Thoughts on Gandhi and Conflict Resolution in Our Community”