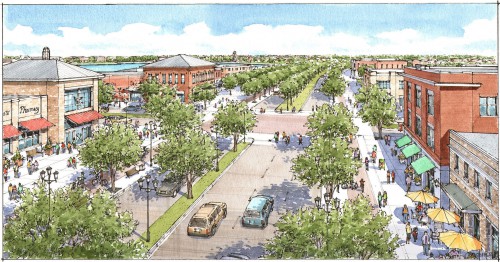 A city that has been unable to develop on the periphery for two decades, starved for tax and new forms of  revenue and short on student housing, is increasingly looking at infill projects that pit new development against existing neighborhoods.  Paso Fino.  Trackside.  Hyatt House.  Lincoln40.  Sterling Apartments.

On Wednesday night I listened as several of the neighbors noted that they moved in without having any reasonable belief that a hotel would be proposed for the vacant lot that lies on Cowell Boulevard.  On the other hand, Commissioner Cheryl Essex had a point that approved uses for that lot include the potential for 50-foot buildings, three stories, and more disruptive uses than a hotel.

While I empathize with neighbors, I worry more these days about the long-term viability of a community that seemingly cannot develop revenue-generating projects, either on the periphery due to Measure R requirements or on infill sites due to the pushback from neighbors.

At the same time, I wonder how many of these concerns are simply worst-case fears that would prove to be unfounded in the long term.  While I understand privacy concerns, I have bedroom windows that close-proximity neighbors could potentially look into – I tend use blinds and curtains to keep my privacy.

I had a discussion the other week that I knew of these arrangements when I moved in.  While there is some truth to that response, it missed a whole other array of points.  The first is, when you move into a new place, you can walk around and see things, but until you actually get in there and live in the location, you never know what you are going to find out.

Also, until you sleep in a new place, you might not be aware of things like bright lights that shine into your bedroom, which you will have to adjust to.  Or sounds and noise from the streets, neighbors or business.

Finally we live under a false sense of permanency.  You drive on the coast and you will see people who have their homes on the edge of cliffs as though the cliffs will always be there.  The reality is that every time we have a big storm in California, a few of those cliffs give way and we lose some of the houses.

As the climate continues to warm and ocean levels rise, more and more homes in low-lying areas will be threatened.

Nature is constantly changing and we forget sometimes that we live on a dynamic planet and that what we see today is merely a snapshot in a moment in time.

The reality is that cities and communities are constantly changing.  Businesses will move in, businesses will go out of business.  We live and adjust to the changing times.

Our community is going to change one way or another.  We will either see more dense infill projects, more projects that emerge on the edge of town, or we will eventually start seeing decline – the inability to pay for our infrastructure is one thing that will hit us sooner rather than later.

There will be impacts to neighborhoods.  We only have so many spots to put new things within town.  We may at some point tear down existing buildings and replace them with taller and more dense structures.  The more we refuse to develop on the periphery, the more we will bring neighborhoods into conflict with redevelopment and densification and infill.

But we cannot avoid change.  As more people move into Davis, we will have more traffic.  In fact, the only real question is where that traffic will be.  The folks who live near Fifth and Pole Line probably prefer to minimize traffic impacts on their neighborhood.  That is understandable.

Change is inevitable.  What we should be working for are ways to keep the things we love about this community even as we accept that things will change.  We should take mitigation seriously and attempt to buffer new impacts, but we cannot allow it to paralyze us or we will be unable to meet the challenges ahead.

87 thoughts on “Sunday Commentary: We Live Under a False Sense of Permanency in Davis”