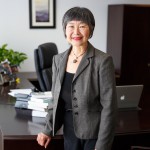 (From Press Release) – Mariko Yamada’s campaign for State Senate District 3 launched an online ad campaign today that highlights her opponent Bill Dodd’s ties to the wealthiest corporations in the nation, including Big Oil and Big Tobacco.

The six-second YouTube ad uses imagery to underscore the stark contrasts between the candidates: Dodd is the corporate-backed candidate on the side of the 1%, and Yamada is the grassroots Democrat running to represent the working and middle class.

The ad promotes the new website TheRichandPowerfulforDodd.com, which includes facts like Bill Dodd was a registered Republican only months before he ran for Assembly in 2014. It also outlines the facts on the dark money trail behind his campaign in June.

Before, and certainly after these major donations, Dodd has supported major corporate interests, including his most recent vote against overtime for farmworkers.

Share:
Tags:3rd Senate DistrictBill DoddElection 2016Mariko Yamada
Previous : California is One Signature Away From Reining in Policing for Profit
Next : Competing Measures for the Death Penalty on Collision Course