I read Rich Rifkin’s death penalty column with interest. He started it with a note that was interesting, pointing out that Prop. 62 asks voters to get rid of a “death penalty that we don’t have.”  I see the proposition somewhat differently – it aligns our laws with our practices and, despite Mr. Rifkin arguing that under Prop. 62 “not much will change,” he is flat out wrong.

His analysis is largely outcome-based, as it has been 38 years since the death penalty was instituted in California, only 13 have been executed, and none since 2006.

But the death penalty isn’t just an outcome, it is a process.  An expensive process.  A lengthy process.

Mr. Rifkin makes a good case for why he doesn’t “believe in California’s death penalty,” despite his overall support for the concept.  He argues that “the extreme delay removes the death penalty’s value as a deterrent.”  He also correctly notes that “when an inmate is killed, it feels arbitrary.”

He correctly points out that, while most opponents of capital punishment are opposed to it on moral grounds, Proposition 62 is based on practical rather than moral arguments.  There is a tactical element to that, not to mention you are not going to change people’s morality, as the death penalty is going to disappear because it doesn’t work.

He notes, “The official case in favor of 62 is focused on expense, DNA technology and the superiority of sentencing people to life without parole.”

This is where I start to part ways with Mr. Rifkin’s analysis.  He grants that “we would save some money in California if we got rid of the death penalty.”  The legislative analyst determined, “reduced costs would likely be around $150 million annually within a few years.”

However, then he attacks “left-wingers” for arguing in favor of cost consciousness.  He notes, “I certainly have never heard anyone on the anti-death penalty side call for competitive bidding in government contracting. That would save the state billions of dollars per year.”

The problem is that Mr. Rifkin is condensing this part of the argument down to cost rather than wasted resources – the problem here isn’t that it costs a lot, as there are things that cost a lot that many of us support.  The problem is that we are spending money, on a system that does not work, in a wasteful and inefficient way.  And I might add on – spending it on something that a good many of us believe is immoral

There are indeed conservatives and libertarians who have turned against the death penalty system based on the waste of money.  That doesn’t mean the proponents of Prop. 62 are advocating for maximizing government savings across the board.  Mr. Rifkin here is not making an argument against Prop. 62, he’s simply poking the left.

The DNA argument he next makes is important.  He calls it “even stranger,” but here he really failed to do the research.

The pro-62 side writes, “The risk of executing an innocent person is real… DNA technology and new evidence have proven the innocence of more than 150 people on death row (across the United States) after they were sentenced to death.”

He argues, “That says to me that because we have DNA technology, it is now less likely we will slay an innocent person. Those 150 were not killed. If our state executes anyone in the future, it will be more certain he was truly guilty.”

This is simply not true and it is a misunderstanding of wrongful convictions. 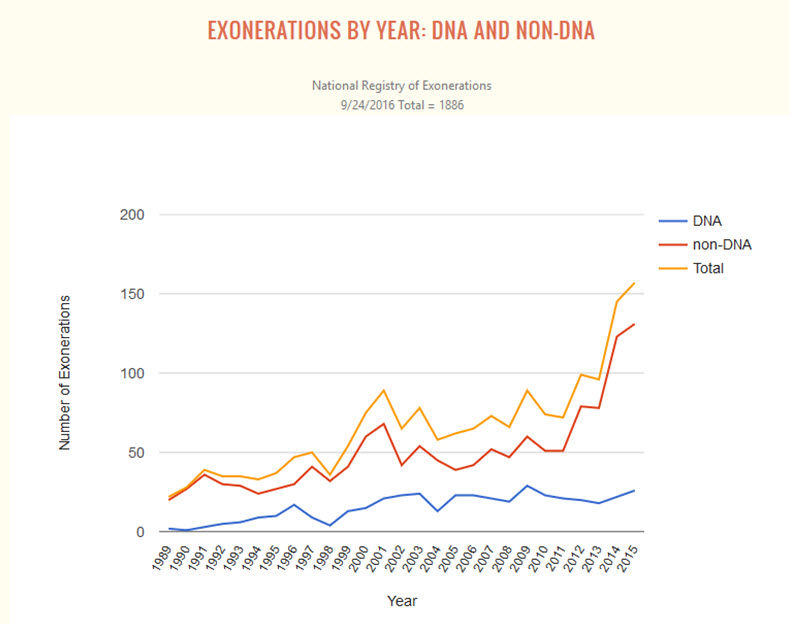 This is a chart from the National Registry of Exonerations and it shows that, over time, the number of exonerations has greatly increased.  But the percentage of them based on DNA is quite low.  Between 25 and 30 of 2015’s exonerations were based on DNA evidence, but that is out of 150 or so.  That’s one out of six.

The advent of DNA has helped us prove beyond any doubt the presence of innocent people on death row, but the number of cases that have DNA evidence is so low, it is not having a practical impact on the number of wrongful convictions – and therefore DNA does not make it that much less likely that we will slay an innocent person.

In fact, in 2015, decades after the advent of DNA testing, we exonerated 150 people from wrongful convictions achieved despite the existence of DNA testing.  That is a scary number, but scarier still is that this represents the tip of the iceberg.

Research from Ronald Huff at Ohio State University conservatively estimated that 0.5 percent of the nearly 2 million convictions that occur in a given year are those of innocent people.  That number doesn’t sound like a lot until you realize that about 10,000 people each year are potentially wrongfully convicted and only 150 in 2015 were exonerated.

Mr. Rifkin then looks at the remedy, life without parole (LWOP).  He writes, “Under Prop. 62, the death penalty will be replaced with a strict life sentence. Those convicted of the worst crimes will never be released. Instead of being housed in expensive private cells on death row, murderers will be kept with other maximum-security inmates.”

He argues that locking people away for 60 to 80 years “strikes me as immoral.”

This is again where Mr. Rifkin would benefit from more research.  One of the biggest debates in the anti-death penalty community is over the issue of LWOP – not just LWOP but also the loss of automatic, state-funded appeals.

In 2012 when the last death penalty measure came on the ballot, most of the death row inmates and their families were opposed to it.  Why?  Because if they were wrongly accused, they lose their state-funded appellate attorneys.  So they would be stuck incarcerated in boxes for decades without the possibility of parole and without the hope of an appellate attorney getting their sentences overturned.

My hope would be that the legislature would use the $150 million in saving to create a system whereby cases could be evaluated and real claims of innocence would be eligible for state-funded defense, but that’s just a hope.

So yes, I think there is a real problem here with Prop. 62 and it comes down to weighing the current problems in the system with some of the unintended consequences for commuting all death sentences to LWOP.

Finally, we get to Prop. 66.  Mr. Rifkin writes, “There is a second death penalty initiative on our ballot — Proposition 66. Its sales pitch is ‘to speed up the death penalty appeals system while ensuring that no innocent person is ever executed.’”

He adds, “I am not sure Prop. 66 will work. But I’m willing to give it a try, because I continue to believe in a functioning death penalty for our most vicious killers.”

There are a lot of problems with Prop. 66.  First, I would argue it is probably not constitutional.  Second, it is infeasible – the state simply does not have the attorneys at its disposal to be able to run appeals at the rate that Prop. 66 would require.

Third, as the ACLU presentation I attended last week noted, while the initiative would possibly speed up the state level appellate process, that’s only part of the delay.  The other part is the federal process, which Prop. 66 would not impact.

Third, you have the imbalance in resources – so people with more resources are more likely to get sentences other than death.

I think if Prop. 66 passes that it will get thrown out and, even if it does not, it will prove too difficult to implement.