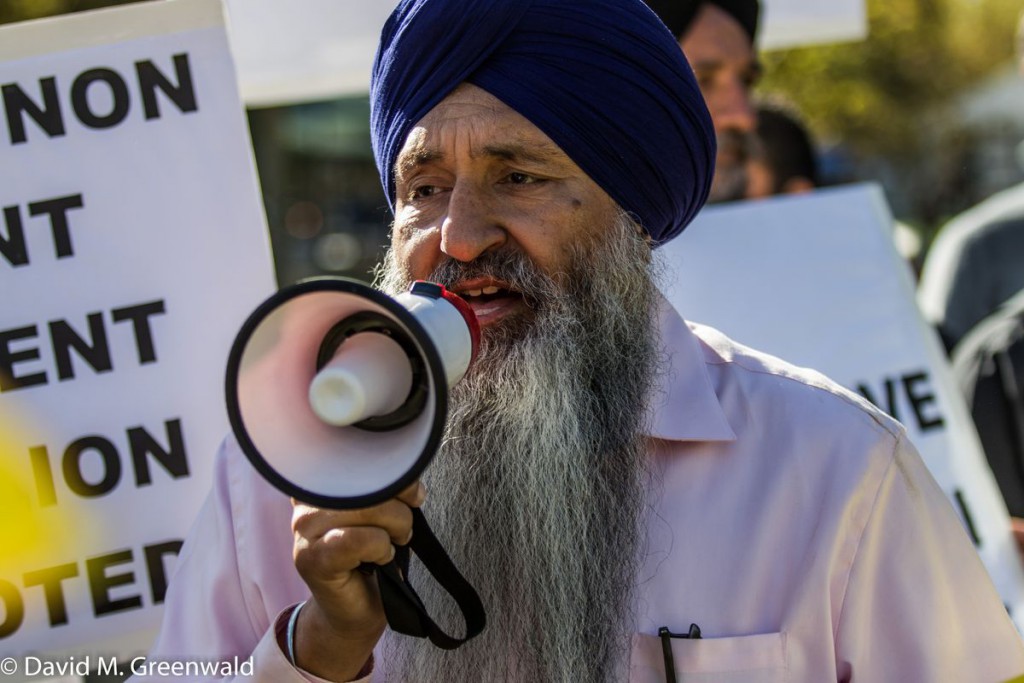 When the Vanguard spoke with Amar Shergill, one of the organizers of the protest of the Gandhi statue, he said, among other things, “We need to bring truth to Davis.  Davis is a progressive town.  They’re willing to listen.  They just haven’t heard this story.  So today is an opportunity to make sure that people in Davis hear the truth that their council turned a blind eye to… and by educating people here, we can make sure that a Hollywood myth is not propagated anymore.”

The truth is that Davis is willing to listen, and through both the meeting on August 31 and now the protests I have come to respect that, while Gandhi may be a hero and icon for some, he represents an oppressor for others.

I am not saying that I agree with the protestors here, but if you look at what happened in India, especially in 1984, you can understand where they might be coming from.

Let me be as clear as possible – I believe in free speech.  Those words are not just lip service here because the Vanguard was predicated on not only the negative right to free speech in the sense of the First Amendment, “Congress shall make no law… abridging the freedom of speech…”  No, we go further, carving out a public space dedicated to the right to free speech.

We may have some rules on decorum, but when it comes to content, we allow all views to be expressed in the comment section and we have published submitted articles that are diametrically opposed to the views of the Vanguard and its editor.  That is positive free speech.

Mr. Shergill told the Vanguard prior to the event that he was impressed with the city of Davis to have allowed the protesters to stand next to the main event and get their message across.  But, while Davis upheld its commitment to free speech, the protesters took advantage of the city’s going out of its way to accommodate the protest, and they ultimately abused their privilege.

But they did not allow her the right to speak.  This troubles me.

In my view, the protesters, in asserting their right to free speech, forgot that they had an obligation to allow the other speakers to be heard by the audience.  One reason why the Vanguard article does not quote the Indian Consulate General is that the protesters drowned out his voice – the combination of his soft tone, his accent, and the protesters made it impossible to pick up what he said on my recorder.

They wanted us to hear them, but they would often not let the crowd and audience hear the other speakers.

The Davis Police Department did a good job of keeping the interaction non-violent, but they were limited in number, wishing to avoid accruing overtime.  Some believe that the city would have been justified calling in the California Highway Patrol.  The CHP is well versed on crowd control and protests, as they often have to keep the peace at protests in front of the State Capitol building.

In the end, rather than pushing this to the city, Davis PD, or the organizers, this was on the protesters.  The protesters could have made their same point with their presence, and by politely listening to the speakers, as they did by shouting on their bullhorns.

I am troubled by the lack of judgment on the part of protesters, as well.  At one point there were school children who had developed songs and poetry to celebrate the life and struggle of Gandhi.  The conduct of the protesters left something to be desired.

First of all, some of the chants that they did were not acceptable for a family atmosphere.  I get it, they think and have some evidence to suggest that Gandhi had sexual indiscretions toward children and family members.  I even get them having that on the signs, but why chant this stuff in front of a bunch of school-age children?  Who thought that was acceptable or a  good idea?

There is a time and place to have these disagreements, but discretion would have been the better part of valor here.

People were legitimately upset over their right to speak being infringed upon.  The protesters, in my view, would have been just as effective – in fact, more effective, because they would have been beyond reproach – had they been there and not chanting during people’s speeches.

61 thoughts on “Commentary: Free Speech Lost Out on Sunday”