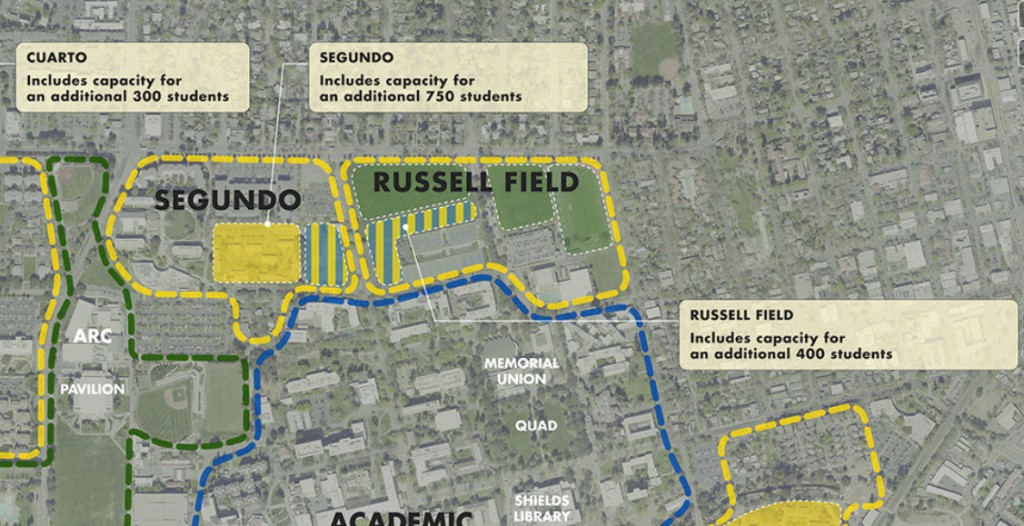 UC Davis, pressured by some in the community to provide more housing, made an unfortunate decision to propose housing along Russell Boulevard as a way to help meet that housing demand.  In some respects, the decision makes some sense – you are putting housing in a central location.

Those who believe this is going to add significant traffic to town simply are not looking at trends in student automobile drivership.

At the same time, from my standpoint it doesn’t make a lot of sense to put student housing there.  As it stands now, the fields provide a nice buffer between community and university along a main thoroughfare.  It allows the university to have a transition point and it provides a space that neighbors and non-neighbors alike can share and appreciate.

At the same time, I think the rhetoric here is a bit troubling.  There was a comment that, because people do not want the fields turned into mid-rise apartments and dorms, they are somehow anti-student.  Someone suggested that housing was being sidelined, someone else suggested that the implication is that “the students are not welcome here.”

This notion is a little absurd, given that people have chosen to live near fraternity and sorority houses, university bands and stadiums with lights – somehow these people are anti-student?

The bottom line for me is that there are other places to put student housing.  One spot clearly is West Village, which has available land and capacity.  The students housed there are not sidelined, they have easy access to the university on bike and by walking.

The Vanguard is still trying to get documents and correspondence on the issue of Nishi and campus housing, but clearly that is another location that the university could add housing.

While the Vanguard was not in attendance at the final open house on Thursday, the understanding from people there is that the university officials got an earful from residents on this issue.  For the most part, the university has taken the path of least resistance.

When the community pushed back to ask the university to take on more housing – the university stepped up and said they would take on 90 percent of new student housing.  They are now planning to house 40 percent of overall students on campus.

When the university proposed housing at the Russell Boulevard fields, the community pushed back strongly.  The university came back with a pared-down plan, but that plan, reducing the number of units by 60 percent, is clearly not sufficient.  We would expect that the next proposal would eliminate Russell Fields altogether.

That being said, I still think we need to be realistic about what the university will and will not do.

Some have suggested that there is more pressure now than there was then.  Pressure is fluid – it builds when there is an immediate threat and it abates as people go back to their normal lives.  The LRDP process focuses that pressure, but this is a long range plan, and  it will be interesting to see if the university sticks with it.

Even when the university has looked into new housing, it has been much slower than expected.  Look no further than the history of West Village, Solano Park and Orchard Park. I don’t think the university is being disingenuous when it makes these commitments, but in ten years, do you believe the university is building capacity for 6200 beds?

Second, there are those who believe that the university should provide for all of the housing growth.  I simply don’t agree that that is practical.  I think it is going to end up being a challenge just to get to 6200 in the next decade.

As the Vanguard has noted in the past, 6200 doesn’t fix the shortages that currently exist.  First, the 6200 is only 90 percent of the total expected student growth, so that means there are another 600 to 800 students that will not have on-campus housing.  Second, we have a very low vacancy rate and so, even if the university added zero students in the next decade, we would need more housing.  Third, that doesn’t account for what will be another 2000 university faculty and staff in a plan that only houses 500 of them on campus.

Some argue that UCD is simply continuing to push off its housing needs onto the city.  Others believe that UC Davis is growing faster than it can accommodate their student population and want the city to pick up that slack.  That’s of course a very difficult process in this community.

The Vanguard has been characterized as pro-growth on this issue, even if what we have repeatedly called for is a middle course – the university should provide the bulk of housing as they have promised, and the belief is that it will not take radical change in the city to provide more student apartments that can ease the pressure on neighborhoods and single-family homes to accommodate increasing student populations.

The real question is whether this community is willing to even try to reach some sort of consensus over what our obligation is.  I reject the notion that this is simply a university problem, just as I rejected the notion that people are being unreasonable in asking the university to find another location for housing other than along Russell.

13 thoughts on “Commentary: The University’s LRDP and Russell Fields Conundrum”