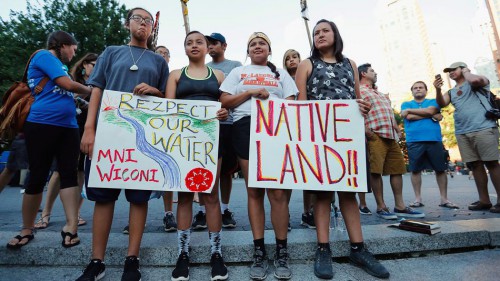 While procedural misunderstandings by the public over the timing of discussion on the resolution against the Dakota Access Pipeline punctuated the evening, the main question before the council was  whether such a resolution was the proper venue of the council at all – the answer from the four councilmembers in attendance, in the absence of Councilmember Lucas Frerichs, was a resounding yes.

Councilmember Rochelle Swanson, who had objected previously to the council taking up the TPP trade agreement, said, “I really appreciate the speaker who pulled it into being a local issue because of the fact of the water and the air and the social justice issues that are happening there.  As well as the rights of a sovereign nation and trying to be able to support a government trying to support changes within its own territory.”

She said that “for those reasons I think there’s a sufficient nexus.”  She added that this doesn’t undo us “from continuing to monitor and make sure we are adjudicating and hearing issues that really affect our city, things for which we were elected for.”

Councilmember Swanson would add, “We should be vigilant and make sure we don’t have mission creep for political reasons.”

Mayor Pro Tem Brett Lee addressed the issue of distracting from city business, stating, “I don’t think this issue has taken away from my ability to focus on the major and impactful items facing our community.”  He said, “The amount of time thinking about this is measured in minutes not hours.  We all have lives outside of our council roles and they involve being concerned about what goes on in our community, our state, our country, our world – so sometimes we are aware of these things and so to make a gesture of support for something or a gesture against something, in many cases it doesn’t require any incremental time on behalf.”

Brett Lee added that, while he appreciates “the idea of focusing on items that they have jurisdiction over,” he find it a “rather strict interpretation.”

He noted that while the city didn’t have jurisdiction over the rail issue in Benicia, he believes that at some level council was swayed by the outpouring of concern from other communities across the region.

Mr. Lee said, “I get what the concern is, what we don’t want to be doing is delving into controversial topics where we spin our wheels and use up a lot of emotional energy and time focused on things that are not our primary responsibility, I totally accept that.”  But he doesn’t see this as a topic that distracts from the important business at hand.

Will Arnold said, “I appreciate the idea that we go too far afield with our resolutions,” nevertheless, in this case, “as the resolution lays out, there are a number of issues that are of critical importance that are a critical part of this issue as well.”

He noted issues of sovereignty, and the rights to clean water as a community and public good.

“I also reject the notion that if we don’t want oil trains, we ought to remain silent on oil pipes,” he said.  “I wholeheartedly reject the idea that there’s some sort of opportunity cost here – if we hadn’t spent whatever amount of time it took us to do this, we would somehow have used that time and fixed the city budget or repaved all of our streets – that’s not how these things work.”

He rejected the idea that we shouldn’t do this because we have to focus “on all this more important stuff.”  He said, “That doesn’t fly with me either.”

Robb Davis noted that the Benicia situation “became very clearly an issue of indigenous local rights.”  There was a proposal “to make this an interstate commerce issue, thereby taking away the rights of local communities to plan for their own future and their own safety – to me that was the biggest threat that any of us faced, was the reality that the federal government or other entities would take away our local rights to plan.”

He said, “We really want maximum opportunity to control what goes on in and around our community.”  He sees what is happening in the Dakotas and elsewhere as an attempt to seize local power in order to extract resources.  “I think we should all be concerned about (that),” he said.

“Today it’s not our community, today its Benicia, or Standing Rock, but these things get closer and closer to home,” he said.  He noted that several speakers pointed out, “If this was happening here, if someone were trying to take away our right to control some element of our local situation we would want solidarity from across the country.  We would beg for it.  And we would be thankful to receive it.”

Robb Davis said just as we stood with the people of Benicia, it makes a lot of sense to stand at places where local sovereignty is under threat.

He joined with his colleagues to add, “We spend a lot of time on a lot of things here.  We give 30 to 40 hours of our week to deal with the major issues of our city – it bothers me that there’s a call for us not to think more holistically and think about issues outside our borders as though we were somehow independent, autonomous, having nothing to do with the rest of the country, it’s just about us.”

“Nothing could be further from the truth in a globally integrated world,” the mayor said.

With that, the council present unanimously voted 4-0 on the resolution to oppose the Dakota Oil Pipeline at Standing Rock.