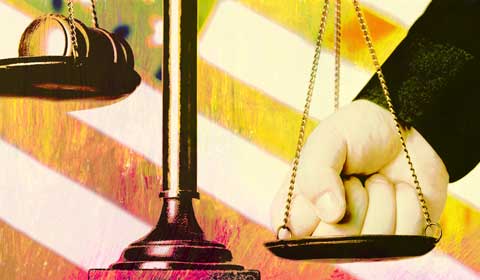 A few weeks ago we presented the case of Oscar Cervantes, who has been sitting in prison for a decade in a case,  with ample evidence that he had no involvement in the case.  In 2006, when the Yolo County DA was prosecuting Mr. Cervantes and two others, there was evidence withheld from the defense.

In 2009, a former DA investigator became the second district attorney’s office investigator to publicly accuse Jeff Reisig, a deputy DA at the time of the Halloween Homicide case, of trying to hide evidence in that case.

The evidence in question was a report written by Randy Skaggs, which put key testimony of a key witness in doubt.  That witness claimed to see the flash from a .22 caliber gun, but the report found that this was not possible under the conditions at the time of the crime.

The report could have been of help to the defense, making the withholding of it what is known as a Brady violation.  Ultimately it was turned over to the defense, and, while Mr. Reisig would win the case anyway, Mr. Skaggs claimed to have been retaliated against due to his disclosure of this report – ultimately he was fired and his reputation damaged.

In 2014, the Vanguard brought Orange County Deputy Public Defender Scott Sanders to Yolo County to talk about accusations of prosecutorial misconduct in several cases he was working on.  In one particular case, Orange County Sheriff’s deputies used jail house informants to question other inmates, facing in most cases murder charges, in order to extract information damaging to their cases – and then neither the Sheriff’s Department nor the DA’s office turned over information they were required to provide.

It was this case that inspired Assemblymember Patty Lopez to author and sponsor AB 1909, which was signed into law on September 30 by Governor Jerry Brown.

Under that law, a prosecutor can receive up to three years in prison for altering or intentionally withholding evidence that defendants might use to exonerate themselves. Previously, those acts were considered misdemeanors.

Prosecutorial misconduct is an epidemic in the legal system, in part because the pressure to win is so high and the risk of punishment is so low.  A 2010 study by the Innocence Project found that there were more than 700 cases where prosecutorial misconduct, particularly Brady violations, were found, and only in rare incidents were involved prosecutors’ intentional misconduct sanctioned by the courts.

“I hear so many stories about innocent people across California, and across the country, who have been wrongfully convicted,” Assembly Lopez said. “I just hope that when people think the rules don’t apply to them, they will think twice before they abuse their power.”

Ms. Lopez said the legislation was not specifically inspired by events in Orange County. However, the controversy surrounding the office of longtime Orange County DA Tony Rackauckas spurred the bill’s advocates and informed the debate on the state Senate floor.

The judge said prosecutors repeatedly had violated Mr. Dekraai’s rights by failing to turn over evidence, though he stopped short of finding that they had engaged in willful misconduct.  The California Attorney General’s office, which has inherited the case, is appealing Goethals’ ruling.

Scott Sanders, who is representing Mr. Dekraai, among others, has argued that Orange County jailers have flouted inmates’ rights for years with an illegal jailhouse-informant program, and that prosecutors consistently have tried to conceal it.

The scandal, which has now drawn nationwide attention, has resulted in the collapse of cases against numerous criminal defendants.

Susan Schroeder, Mr. Rackauckas’ chief of staff, said her boss had supported the evidence-falsifying bill from “very early on,” adding: “He believes all prosecutors should follow the law.”

However, she said, Mr. Rackauckas believes the law should be extended to defense attorneys who intentionally withhold evidence. She said it would not have applied in the Mr. Dekraai case, and pointed to Judge Goethals’ ruling, which found no proof that prosecutors intentionally hid evidence.

In August, the state Senate voted 36 to 1 in favor of the bill. The lone no vote came from Senator John Moorlach (R-Costa Mesa), whose district covers much of Orange County. In a speech on the Senate floor, Senator Moorlach noted the bad publicity that has enveloped DA Rackauckas in recent years.

“If you read his press clippings, you become pretty happy real quick that you don’t have him,” Senator Moorlach said. “Bottom line, I think he’s lucky he’s an elected official, because it’s just too expensive to recall and replace” him, he said.

Announcing his opposition to the bill, however, Senator Moorlach said he believed that it was “just a tad too severe” in calling for felony penalties against prosecutors.

In an interview last week, Senator Moorlach said he was very disturbed by the possibility that Mr. Dekraai — who murdered his ex-wife and seven others at a Seal Beach salon in 2011 — might avoid the death penalty as a result of missteps by jailers and prosecutors. “They deserve justice,” he said of the victims’ families.

“I think at the end of the day, the lawyers in the Orange County D.A.’s office want to do what’s right. I’m giving them the benefit of the doubt,” Senator Moorlach said.

Among the bill’s advocates was Obie Anthony, 42, who served 17 years behind bars after being convicted in 1995 of a murder outside a South Los Angeles brothel. He was exonerated in 2011 after it was revealed that a key prosecution witness, a pimp, had received leniency in exchange for his testimony — a deal prosecutors had not disclosed.

“I’m glad the governor decided to put his foot down,” said Mr. Anthony who told his story to California lawmakers as they weighed whether to support the bill.

“I went to talk to them about how those bad-acting prosecutors took 17 years of my life,” said Mr. Anthony, who now lives in Missouri and runs a nonprofit organization, Exonerated Nation, for the wrongfully convicted.

Matthew Guerrero, president of the California Attorneys for Criminal Justice, a legislative advocacy group that pushed for the law, said the Orange County scandal “really invigorated our organization to recognize that there’s a problem.”

“The prosecution in that situation seemed to be acting with impunity,” Mr. Guerrero said. “So we wanted to send a strong signal that the criminal justice system needs to do the right thing in the right way.”

People the Vanguard have spoken to believe that, while the bill is rightly intentioned, there are some critical flaws.  The first is that if it does not apply in a case as egregious as the Scott Dekraai case, where is it going to apply?  The judge there split the baby – admonishing the Sheriff’s Department and DA’s office, but stopping short of calling it intentional.

The second problem is that the felony punishment would effectively end the careers of prosecutors getting caught under AB 1909, but that might make it difficult to get the State AG’s office to file such charges.

Indeed, the California DA’s Association initially had opposed the bill, but took a neutral position on the final version.

Meanwhile, the California Bar Association, which has taken on criticism for failing to enforce existing laws against misconduct, has attempted to beef up their operations by approving “a proposed new ethics rule regarding the special duties of prosecutors in criminal cases, specifically addressing their responsibility to disclose evidence to the defense.”

The rule must be approved by the California Supreme Court in order to take effect.

The proposed new Rule 5-110, which is similar to American Bar Association Model Rule 3.8, “requires broad disclosure of evidence the prosecutor knows or reasonably should know would be helpful to the defense. “

“Prosecutors should be held to high ethical standards not only to protect the rights of defendants but also to ensure public trust and confidence in the justice system,” State Bar President James P. Fox said. Fox spent nearly three decades as the elected district attorney for San Mateo County, but tried his only death penalty case on the defense side, when he was in private practice.

The proposed new rule will go to the Supreme Court in advance of a larger project to overhaul the Rules of Professional Conduct for the first time since the 1980s. According to the press release from the Bar, “The rules guide the legal profession in California and are used to protect the public. Attorneys who violate the rules are subject to discipline from the State Bar. Last year alone the State Bar processed nearly 16,000 complaints of violations of these and other rules. The State Bar’s Commission for the Revision of the Rules or Professional Conduct, chaired by Justice Lee Edmon of the 2nd District Court of Appeal, has developed 68 new and amended rules to be finalized by the Board of Trustees and submitted to the court by the end of March 2017.”

2 thoughts on “Eye on the Courts: California Cracking Down on Prosecutors Withholding Evidence”