The Royal Ganesh Hotels, which manage the current University Park Inn and the proposed Embassy Suites Hotel Conference Center, are suing  Nishi Gateway and Tim Ruff, in his individual capacity and as managing member and authorized agent for Nishi, among others, for “a breach of contract and request for an injunction and declaratory relief” against Nishi and Ruff, the Vanguard learned through an acquisition of court files through a third party.

In the alternative, “this lawsuit asserts causes of action for fraud and unjust enrichment by Nishi and Ruff.”

“The Royal Option Agreement obligated Nishi to deliver to Royal an assignment of Nishi’s right to acquire the Subject Property from Owners, in exchange for Royal’s payment of $300,000,” the complaint alleges.

The complaint continues, “Nishi and Ruff have taken substantial sums from Royal. Both have intentionally refused to perform their obligations under the Royal Option Agreement, and have subsequently actively interfered with Royal’s attempt to acquire the Subject Property.”

“Plaintiff believes that it is Nishi’s intent to instead acquire the Subject Property for itself, in order to develop its own project, commonly known as the Nishi Gateway Project. The development of the Nishi Project was dependent on a June 2016 voter approval of ‘Measure A,’ contemplating an amendment to the City of Davis General Plan designating existing agricultural property as educational research park development property,” the complaint states.

On August 28, 2015, Nishi and Royal entered into the Royal Option Agreement.  Under this agreement, Nishi granted Royal the right to acquire Nishi’s rights.  In order to accomplish this, Nishi was obligated to deliver the assignment of the original option to Royal, and in exchange they would receive the payment.

This was executed on August 29, 2015, and confirmed and ratified on January 8, 2016.  But they allege that Nishi, through Mr. Ruff, refused to release the signature, thus preventing Royal from closing on the acquisition of the original option or the subject property.

The fourth cause of action alleges fraud, in the form of a false promise.  They write, “From information obtained during the course of Royal’s efforts to get Nishi and Ruff to perform under the Royal Option Agreement, Royal anticipates that Ruff and Nishi may take the position that there was no enforceable contract or promise and, therefore, as an alternative to its prior claims, Royal asserts that any lack of an enforceable contract or promise by Ruff and Nishi is merely the result of a false promise and fraud by Ruff and Nishi.”

On August 28, 2015, in Davis, California, Nishi by way of Tim Ruff, allegedly “made oral and written statements to Royal and its principal, Ashok Patel, promising to deliver an assignment of the Original Option to Royal in exchange for Royal’s payment of $300,000 to Ruff and Nishi.”

The complaint continues, “This statement was material to Royal, in that the Subject Property purchased by way of the assignment of the Original Option has a unique and particular value to Royal. Had Ruff not made the statements on his own behalf and on behalf of Nishi, Royal never would have agreed to pay, and would not have paid, $300,000 to Nishi and Ruff.” 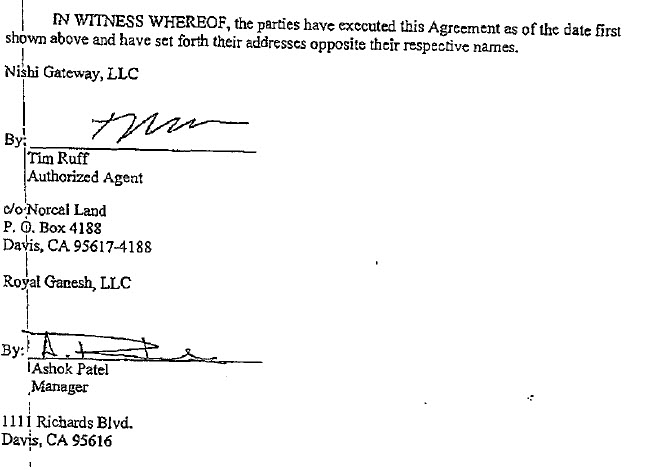 The next hearing for this will be on Monday, with a case management conference scheduled for December.