Back in mid-September, following a long and contentious meeting, the Board of Supervisors agreed to a compromise, allowing Field & Pond to hold 20 events on their site.  The facility is a bed-and-breakfast and event center located on rural County Road 29. However, due to a staff error by the county, the item will have to be revisited.

An email on Friday, from Taro Echiburu, Director of the Department of Community services indicated, “I am writing to inform you that the Field & Pond use permit will need to be reheard by the Board of Supervisors due to an inadvertent error in the CEQA documents presented to the Board.”

Mr. Echiburu writes, “The differences between the final MND and the 9/13 hearing version affect only a small amount of text, but the resulting inconsistencies support a rehearing. County Staff want to ensure that the Board’s decision is based on the same materials as those vetted by the public.”

“Any public comment, testimony or other evidence already submitted as part of the Planning Commission and Board of Supervisors’ hearings is part of the record, and members of the public are not required to resubmit them for the re-hearing.  Of course, any member of the public is free to offer additional comments or evidence in advance or at the hearing,” he writes.

He offered an apology for the error, “I want to personally apologize to everyone about this error.” 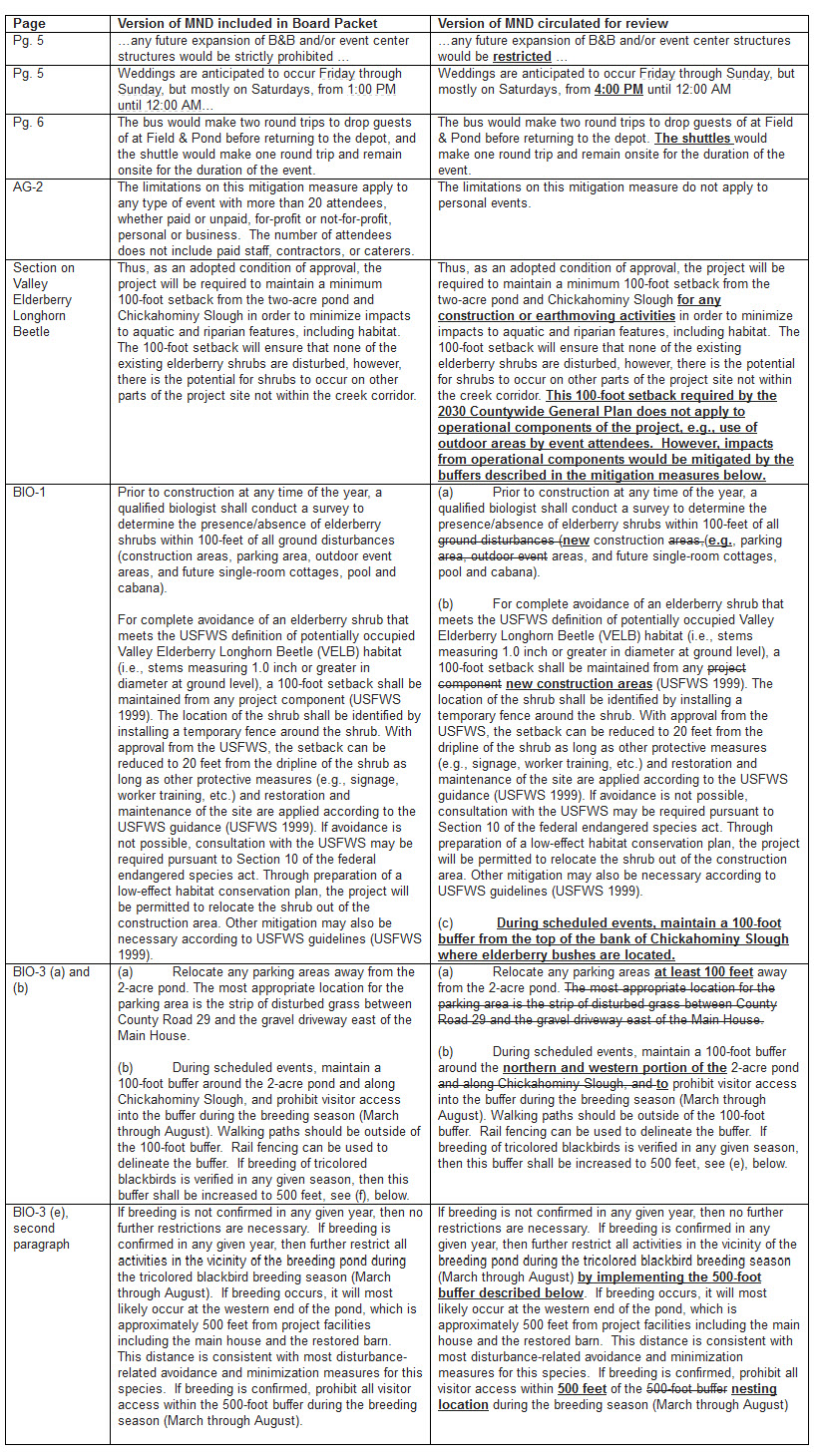 At this point, it is not clear if the Board could simply approve the correction via the consent calendar, or if they would have to do it all again.  It would be hard to imagine that this would end up changing anything.

At the September 13 hearing, the approval got four votes, with only Supervisor Duane Chamberlain offering a vehement opposition.

After much discussion, Supervisor Matt Rexroad eventually put forth the motion with the assistance of County Counsel Phil Pogledich which, among other things, allowed for 20 events, four of them as large as 300 people. Shuttles would be required, the blackout dates from July 15 to September 15 would stand, the scheduling would be limited to Saturdays, they added an end time of 11 pm, with music cut at 10 pm, and security would be mandatory with the Yolo County Sheriff’s Office notified of the event.

Supervisor Duane Chamberlain was the lone opponent of the project altogether, arguing that, without the spray buffer, “you can’t farm at all, that’s for damn sure.”  He said that the smell of the spray leads people to believe they have been exposed to toxic air even when they haven’t.  “Winds change, things change, it’s ridiculous to think that you can draw a line on a map.”

He added, “I don’t want to take any land out of the Williamson Act.”  He agreed with the opponents to the project that city people on the road are a problem waiting to happen.  And he finally argued that weddings and an event center “are not agritourism.”

Supervisor Rexroad noted that, looking at this as a bed and breakfast site, “Even if that is every night, I don’t think eight trips on a road is all that many, so when I look at that I would think that that would be the type of thing that we would encourage – certainly that is what I took from our general plan discussion many years ago in terms of the types of things we were looking for.”  He said that “we wanted people to come out and do that.”

“The only real question we have … is how these events fit in,” he said.  “At what point do they become a nuisance – I think that’s really the question we have before us today.”  He said, in terms of the B&B, even if they want to have it 365 days a year, “it’s hard for me to understand how that truly has a negative impact.”

Supervisor Oscar Villegas said that the “county owns some of this mess,” as they wanted to have the flexibility to see this type of business without seeing it too narrowly defined.  He noted that, after all he had heard, “I don’t think we are that far away to find a way to make it a win-win, co-existing, compromise.”

He said, “Really, it’s down to very few questions.  I would love to figure out a way to get to that point now.  I don’t think it’s a perfect situation.”

He added that he could understand the concerns of the neighbors, but also that of the applicants, who he felt they were led to believe they were playing one game, only to have the goalposts moved.

Most likely this is just a technicality, with the county opting to make sure it has all the legalities tied down in case the neighbors or other opponents wish to legally challenge it.

11 thoughts on “Technicality Sends Field & Pond Back to the BOS”