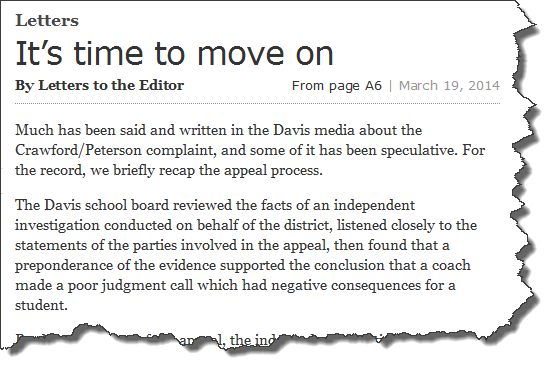 While I voted for Trustee Susan Lovenburg previously, I have been disappointed with many of her decisions. Lovenburg sided with her fellow board trustee, Nancy Peterson, who subsequently stepped down as trustee, in voting to fire coach Julie Crawford for personal reasons. Trustee Lovenburg’s decision led to a costly investigation by lawyers who were paid tens of thousands of dollars to determine whether a child belonged on a sports team.

Rather than recognizing their costly error, Lovenburg and a fellow trustee authored an op-ed in The Davis Enterprise that instructed the community that we should just “move on.” Sheila Allen paid the price for this letter in the failure of her City Council campaign in 2014, and perhaps Susan Lovenburg thinks that the community has forgotten her role in this debacle.

I have also been troubled that Lovenburg often seems quick to make up her mind on issues and is then unwilling to reconsider or considers others’ views with which she disagrees. I recently ran across an article in the Davis Vanguard from 2008 that stated, “Throughout the proceedings, the Vanguard and much of the audience was taken aback by the demeanor and approach of newly elected school board member Susan Lovenburg. … Ms. Lovenburg claimed to have come to the meeting undecided, but her line of questioning belied that claim. Moreover, her approach and demeanor were at times condescending and insulting to those who had poured sweat and toil into this process.”

Our students and community deserve new representation that will bring positive change for our schools and use precious tax dollars for the greatest benefit to our students.

It’s time to move on

Much has been said and written in the Davis media about the Crawford/Peterson complaint, and some of it has been speculative. For the record, we briefly recap the appeal process.

The Davis school board reviewed the facts of an independent investigation conducted on behalf of the district, listened closely to the statements of the parties involved in the appeal, then found that a preponderance of the evidence supported the conclusion that a coach made a poor judgment call which had negative consequences for a student.

By the conclusion of the appeal, the independent investigator, the associate superintendent, the superintendent and a majority of the board all concurred

that the facts supported this finding.

The evidence demonstrated a poor decision, but not a poor volleyball coach. Poor choices have consequences, in this case, a short-term suspension from coaching. Though the board modified the consequence slightly, it largely reflects the original recommendation of the superintendent and Ms. Crawford is welcome to coach again in the future.

This episode has generated much debate in the community; we trust it will also guide us to greater mindfulness. The board and administration will review and strengthen policies and practices, especially those related to personal conflict of interest and to resolution of complaints. Parents should think carefully where the line lies between advocacy for a child and possible harassment of a coach or teacher. And educators are reminded that the best interest of students should always be the determining factor in a public school environment.

With these lessons in mind, it is time to move on.

14 thoughts on “Guest Commentary: Time For Change On Board”