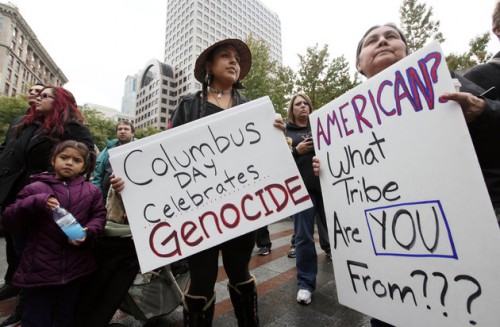 This article contains graphic descriptions of crimes against humanity. I have done my best to keep my own descriptions to a minimum, instead allowing the words and actions of Columbus and his men to speak for themselves. With that disclaimer in mind, on to the substance of the article.

But why celebrate Columbus? What did he accomplish? Why is that relevant today? Well, the declaration signed by Nixon in 1972 goes like this:

“On October 12 we again celebrate in honor of the great sea captain and explorer whose historic westward voyage across the Atlantic led to the permanent settlement of America.

“Respect for the achievement of Christopher Columbus is especially appropriate this year when we have witnessed an epic journey of discovery, the journey to the moon. Both the voyages of Columbus and those of our modern astronauts are expressions of man’s great ambition to confront the unknown, and to master the challenges of distance and space.

“We remember also that Columbus was a man of Italy, a noble example for the many other men of Italy who have come to our country and to so many other lands of the new world. Sailing in the service of the Spanish crown, which had the vision to support his courage and initiative, Christopher Columbus opened America for all the people of the world.

“In tribute to the memory of Columbus, the Congress of the United States, by a joint resolution approved April 30, 1934 (48 Stat. 657), requested the President to proclaim October 12 of each year as Columbus Day for the observance of the anniversary of the discovery of America.

“Now, Therefore, I, Richard Nixon, President of the United States of America, do hereby designate Sunday, October 12, 1969, as Columbus Day; and I invite the people of this nation to observe that day in schools, churches, and other suitable places with appropriate ceremonies in honor of the great explorer.

“I also direct that the flag of the United States be displayed on all public buildings on the appointed day in memory of Christopher Columbus.

“In Witness Whereof, I have hereunto set my hand this eleventh day of September, in the year of our Lord nineteen hundred sixty-nine, and of the Independence of the United States of America the one hundred ninety-fourth.

There are so many problems with this narrative, but it shows the profound ignorance of the time. Did Richard Nixon really think America was totally unsettled when Columbus sailed across the Atlantic? Did Columbus really discover America? He was not even the first European to set foot in the Americas! Was it “courage and initiative” by Ferdinand and Isabella to outfit a military expedition to systematically enslave and plunder the wealth and people of the new world? I suppose that is one way to look at it…

Columbus is not someone who we, as Americans and in particular Davisites ought to be honoring, even if it is only symbolic. He perpetrated systematic slavery, genocide and rape of native peoples. He was responsible for the deaths of hundreds of thousands of people. Need convincing? Here are some quotes from the diary of Columbus. (these are the subject of the disclaimer at the beginning). Here is Columbus on raping native women:

While I was in the boat, I captured a very beautiful Carib woman, whom the said Lord Admiral gave to me. When I had taken her to my cabin she was naked—as was their custom. I was filled with a desire to take my pleasure with her and attempted to satisfy my desire. She was unwilling, and so treated me with her nails that I wished I had never begun. But—to cut a long story short—I then took a piece of rope and whipped her soundly, and she let forth such incredible screams that you would not have believed your ears. Eventually we came to such terms, I assure you, that you would have thought that she had been brought up in a school for whores.

Awful right? Why does this guy have a national holiday again? How about this bit about genocide in Cuba: (again this is graphic)

And the Christians, with their horses and swords and pikes began to carry out massacres and strange cruelties against them. They attacked the towns and spared neither the children nor the aged nor pregnant women nor women in childbed, not only stabbing them and dismembering them but cutting them to pieces as if dealing with sheep in the slaughter house. They laid bets as to who, with one stroke of the sword, could split a man in two or could cut off his head or spill out his entrails with a single stroke of the pike. They took infants from their mothers’ breasts, snatching them by the legs and pitching them head first against the crags or snatched them by the arms and threw them into the rivers, roaring with laughter and saying as the babies fell into the water, “Boil there, you offspring of the devil!” Other infants they put to the sword along with their mothers and anyone else who happened to be nearby. They made some low wide gallows on which the hanged victim’s feet almost touched the ground, stringing up their victims in lots of thirteen, in memory of Our Redeemer and His twelve Apostles, then set burning wood at their feet and thus burned them alive. To others they attached straw or wrapped their whole bodies in straw and set them afire. With still others, all those they wanted to capture alive, they cut off their hands and hung them round the victim’s neck, saying, “Go now, carry the message,” meaning, Take the news to the Indians who have fled to the mountains. They usually dealt with the chieftains and nobles in the following way: they made a grid of rods which they placed on forked sticks, then lashed the victims to the grid and lighted a smoldering fire underneath, so that little by little, as those captives screamed in despair and torment, their souls would leave them….

I could continue, talking about the forced labor system called encomiendas or the mass suicides of the Tiano people in order to avoid enslavement from Columbus’ men, but I think the point has been made sufficiently. If Columbus were alive today, I hope he would be put on trial for crimes against humanity in the Hague. It is long past time for Davis to celebrate Native Peoples Day instead of Columbus Day. Next year I will ask the City to make it official, and I encourage all of you to do the same.

I wrote this article to show Vanguard readers that history is often kind to the victors, and tends to overlook the flaws and heinous crimes of famous or influential figures. This is true of practically every historical giant. Constantine, Thomas Jefferson, Abe Lincoln, Woodrow Wilson, Ronald Reagan and yes, even Gandhi. To deify these historical figures does no favors to the truth, and learning from history. George Santayana famously said “those who cannot remember the past are condemned to repeat it”. How are we to learn from history, if we ignore the evils perpetuated by the powerful?

Share:
Tags:Columbus DayNative People's Day
Previous : Justice Watch: Trump and the Exoneration of the Central Park 5
Next : Commentary: A Bittersweet Reminder of What Could Have Been