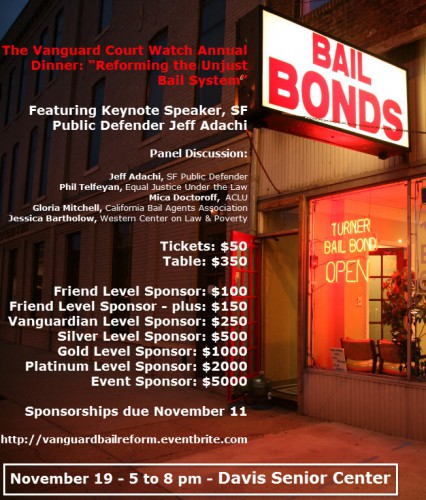 Bail reform has become a huge issue with the US DOJ now filing a brief arguing that fixed bail schedules “that allow for the pretrial release of only those who can pay, without accounting for ability to pay and alternative methods of assuring future appearance, do not provide for such individualized determinations, and therefore unlawfully discriminate based on indigence.”

The Contra Costa Times reported last year that roughly 65-70 percent of those in county jail custody are awaiting trial and that number is up to 85 in the Bay Area.

“The presumption of innocence in this country is meaningless because, for most of our clients who are poor people, they are incarcerated pending their trials,” he said. “It places much more pressure on them for innocent people to plead guilty. It creates a disincentive for cases to be fully investigated and litigated.”

July 31: Why Bail Reform Is One of the Most Critical Issues Facing the Criminal Justice System

All proceeds go to support the Vanguard Court Watch Project – Davis Vanguard is a 501c3 non-profit, all donations are tax deductible