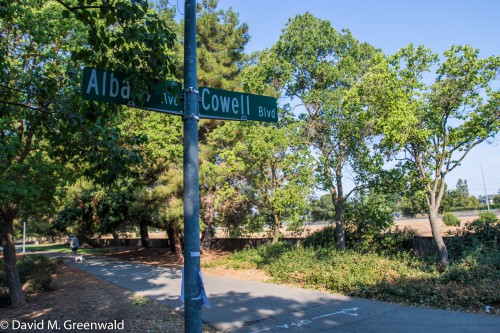 We have had a number of discussions here on the Davis Vanguard (DV) about proposed development projects, and how those projects fit with the intended land uses as spelled out in the General Plan and pertinent specific plans. The oft repeated argument being that the developers should ‘respect the zoning’ by designing projects that fit the plan(s). Unfortunately, in many cases the discussion is not based on what the land use regulations actually say, but instead what one party or the other purports them to say (or perhaps, hopes that they say).

This has been particularly true of the numerous discussions around the proposed Hyatt House project on Cowell Blvd., adjacent to the Rosecreek neighborhood. I do not wish to rehash the entire controversy, but instead would like to focus on two issues that have been raised by project opponents. The first is whether a hotel has been envisioned as an appropriate business type in the area immediately adjacent to the Rosecreek residential neighborhood. The second issue is whether the noise reduction benefits of the proposed Hyatt House project constitute a real benefit to the neighborhood, or an unneeded attribute used by the Developer as a marketing device. Some opponents of the project have questioned the appropriateness of having a hotel next to a residential area and the significance of the noise reduction.

To address these questions I acquired and read the supporting land-use documents as located on the City’s website, as well as addressed specific questions to the City’s Planning Department staff.

The South Davis planning area that includes the project site and the Rosecreek neighborhood was originally described as part of the South Davis Specific Plan (SDSP) addition to the City’s General Plan. The SDSP was approved by the City Council in 1987, with subsequent amendments over the years. For those interested, the entire plan is available on the City’s website:  http://cityofdavis.org/home/showdocument?id=6058

The image below is a section of the map found on page 10 of the SDSP showing the project site and surrounding area. For clarity, I have modified the image by showing only the upper half of the page, and by annotating it to include the location of the Davis Diamonds facility, the Hyatt House site, and the Rosecreek neighborhood. 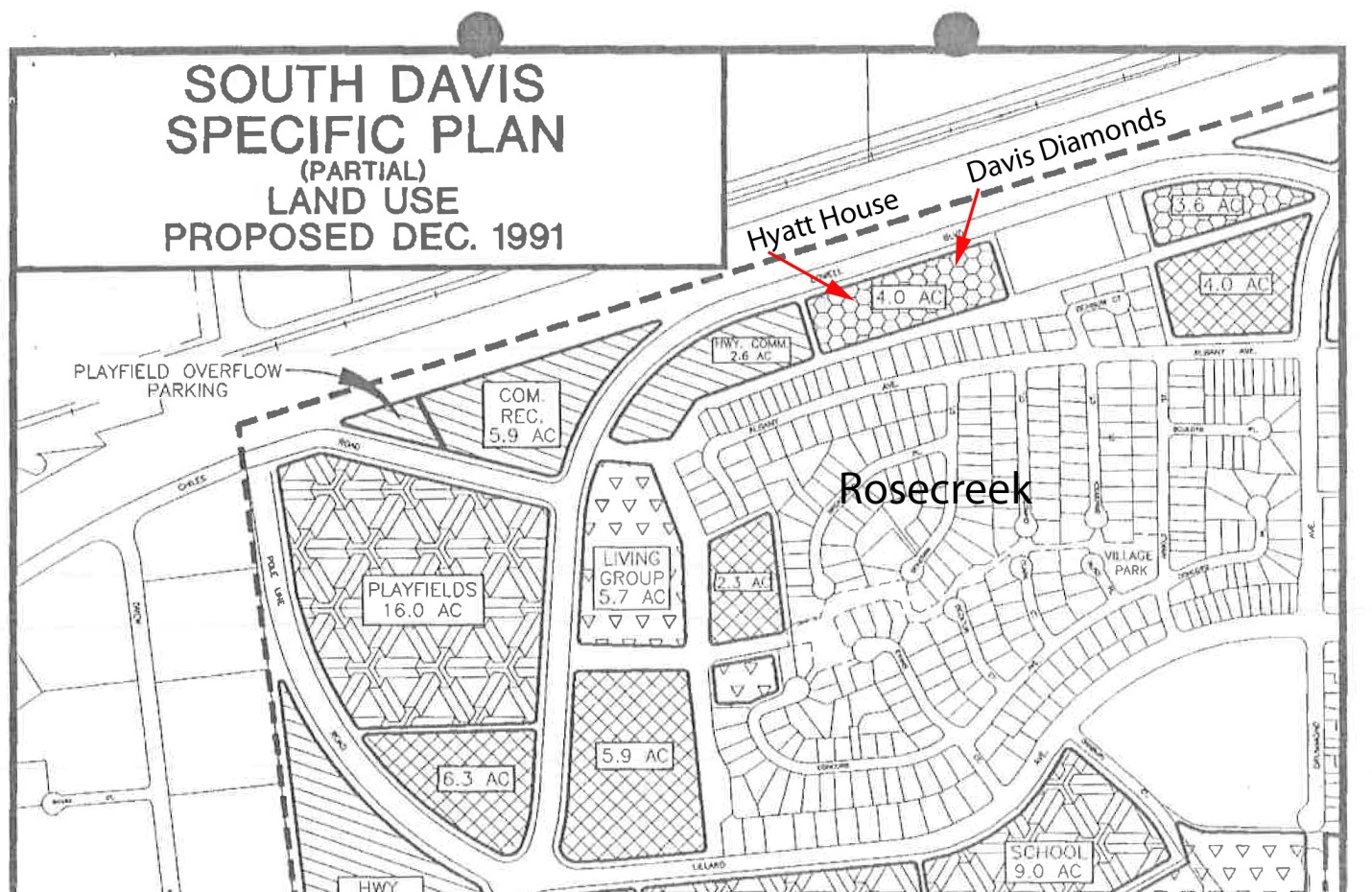 If you will note, the parcel immediately to the west (left on this map) of the Hyatt House location, is a curve shaped parcel of approximately 2.6 acres, designated as ‘Highway Services Commercial.’ According to the Planning Department staff, the City no longer utilizes this land use designation; consequently, the definition of this designation is not present in the current zoning code for Davis. Davis codes generally conform to the County and State codes, however, so here is the definition of Highway Services Commercial from the Yolo County ordinance. http://www.yolocounty.org/home/showdocument?id=35876

(d) Highway Services Commercial (C-H) Zone The purpose of the Highway Services Commercial (C-H) zone is to provide for retail, commercial, amusement, and transient residential (hotel/motel) uses which are appropriate to highway locations and dependent upon highway travel. Permitted uses include auto and truck service stations and repair, vehicle and boat equipment sales, hotels/motels, restaurants, small retail sales. The C-H zones are applied on parcels of two (2) acres or more and are located only in the vicinity of highways or major arterials. The maximum permitted floor area ratio in the C-G zone is 1.0. The C-H zone implements the Commercial General (CG) land use designation in the 2030 Countywide General Plan [emphasis added]

As you can see, hotels are considered an approved use for this land use classification, so when the SDSP was adopted, hotels were an approved use for this parcel. A parcel that is immediately adjacent to both the proposed Hyatt House project and the Rosecreek neighborhood. The current land use designation for the parcel according to City staff is Commercial – Mixed Use, which does not include hotels as an approved use. In contrast, however, the land-use map in the current General Plan (as amended in 2007) designates the parcel as General Commercial (GP, pg 69) which includes ‘motels’ as a ‘Conditional Allowable’ use. While there is no indication that the Hyatt House parcel was ever zoned in a way to include hotels, it is clear that hotels were considered appropriate for the immediate area, and in particular, immediately adjacent to the Rosecreek neighborhood.

As an interesting aside, the City Staff were unable to document when the land use designation for the parcel was changed by action of the City Council. Without that documentation, they may have a difficult time defending the designation change if the property owner chooses to challenge it.

In his October 16th article on the Vanguard, Shane Tucker used the City Council’s criteria to assess the two hotel proposals.  https://www.davisvanguard.org/2016/10/tale-two-hotels-need/ In the discussion that followed, the noise reduction was again called out as not being important to the neighbors. One commenter expanded on this concern by making a more general statement about the need to focus on what the neighbors want, rather than on what others think might be important.

“Likewise of the “neighborhood benefits”, at least the first two (noise reduction, and increased safety) were either not felt important or disputed by the neighbors. Also, I would like to point out that “benefits” are beneficial only if they are desired by the neighbors, not if they are thought to be desirable  or “nice to have ” by someone who does not live in the neighborhood.” Tia Will October 16, 2016 at 7:26 am.

[I would like to point out here that Dr. Will is neither a neighbor nor an opponent of the project, but rather a concerned citizen expressing her opinion. I am using her quote as a means of addressing the relevance of the noise reduction issue and not to imply that she opposes the project].

The important question then, is whether the projected noise reduction is a true benefit to the neighborhood, or simply a ‘nice to have’ feature used by the developer perhaps as part of their marketing efforts.

If we look at the General Plan, section 21, Noise, we find that exterior noise levels in the City are a serious concern, and that residential neighborhoods located near the freeways are at the greatest risk.  http://documents.cityofdavis.org/Media/Default/Documents/PDF/CDD/Planning/Plans-Documents/GP/007-21-Noise.pdf

The City’s standards for exterior noise exposure in residential neighborhoods based on the day night average level (DNL) is as follows:

“Existing residential areas which are subjected to the highest levels of unmitigated roadway noise are residences in close proximity of Interstate 80 and along many arterial roadways.

The noise levels were also a serious issue with the development of South Davis as is made clear from the noise analysis done for the EIR that the residential areas nearest I-80 will be out of compliance for the City’s acceptable exterior noise levels. [The Hyatt House applicants noise analysis found that the existing exterior noise level in the backyard of 2715 Albany Ave was 65 dbl].  In order to mitigate the excessive noise levels near the freeway, the City designed the South Davis expansion with the goal of creating a strip of commercial development located between the freeway and the residential neighborhoods to act a sound buffer. This is spelled out specifically in the General Plan, SDSP and the specific zoning requirements for the parcels on Cowell Blvd:

“Provisions of a land use buffer of non-residential use along Chiles Road [which is now in part, Cowell Blvd] to reduce noise effects of I-80 and to provide a more aesthetic design than a large continuous block sound wall” (SDSP, Pg 14).

From the 2001 General Plan’s discussion of the creation of the land-use map we find #12 “Designate areas along the freeway for aesthetically pleasing, non-noise sensitive uses that will provide a noise buffer for adjacent residences.” (GP, Pg 57).

And finally from the specific zoning requirements in the SDSP as reprinted in the Hyatt House Hotel Staff Report: “Buildings, walls, and landscaped berms shall be designed generally parallel with Interstate 80 to form a functional noise barrier.” http://documents.cityofdavis.org/Media/Default/Documents/PDF/CityCouncil/CouncilMeetings/Agendas/20161101/06-Hyatt-House-Hotel.pdf (pg, 06-10)

This all demonstrates (along with the specific zoning specifications on the individual parcels)  that the City intended for a line of commercial buildings 35’- 50’ tall located between the residential neighborhoods and I-80, with the buildings running roughly parallel to the freeway, as the required mitigation to reduce the exterior noise levels in the residential neighborhood.  So the reduction touted by the Developer and the City Staff is not some ‘nice to have’ add on that is ‘undesired by the neighbors’ (and at least one concerned citizen), but rather is the mitigation required in the City’s General Plan and SDSP EIR to reduce the exterior noise level in the Rosecreek residential area (and other areas). Required mitigation that the City has failed to provide in the 29 years since the SDSP was adopted.

As stated at the start, I went into this exercise not with the desire to rehash the controversy surrounding the Hyatt House proposal, but rather to examine two specific concerns raised by project opponents in light of the City’s foundation planning documents. I hope that I have demonstrated the value of these foundation documents for fully understanding the issues in play. Specifically, that hotels have been considered by the City to be appropriate businesses to be included in commercial zones immediately adjacent to residential neighborhoods, and that the commercial zone located between the Interstate and the South Davis residential neighborhoods was designed specifically to mitigate the excessive noise found in those neighborhoods. Unfortunately for the residents of Rosecreek, the City has failed to supply that required mitigation now for nearly three decades. Next Tuesday night, the City Council will have an opportunity to redress that particular failure.

About the author:  Mark West was born and raised in Davis and with the exception of time off for sometimes questionable behavior while in school (Berkeley, Baltimore), has lived in Davis for most of his life. With his wife he has raised two adult daughters, and the four school-age children currently in their home.  He is an over-educated, retired small-business owner, who reads planning documents without benefit of any land-use (or any other form of) legal training, and who believes that it is past time for the City to recognize and start paying for all of its unfunded obligations.

12 thoughts on “Guest Commentary: What Does the Zoning Say?”