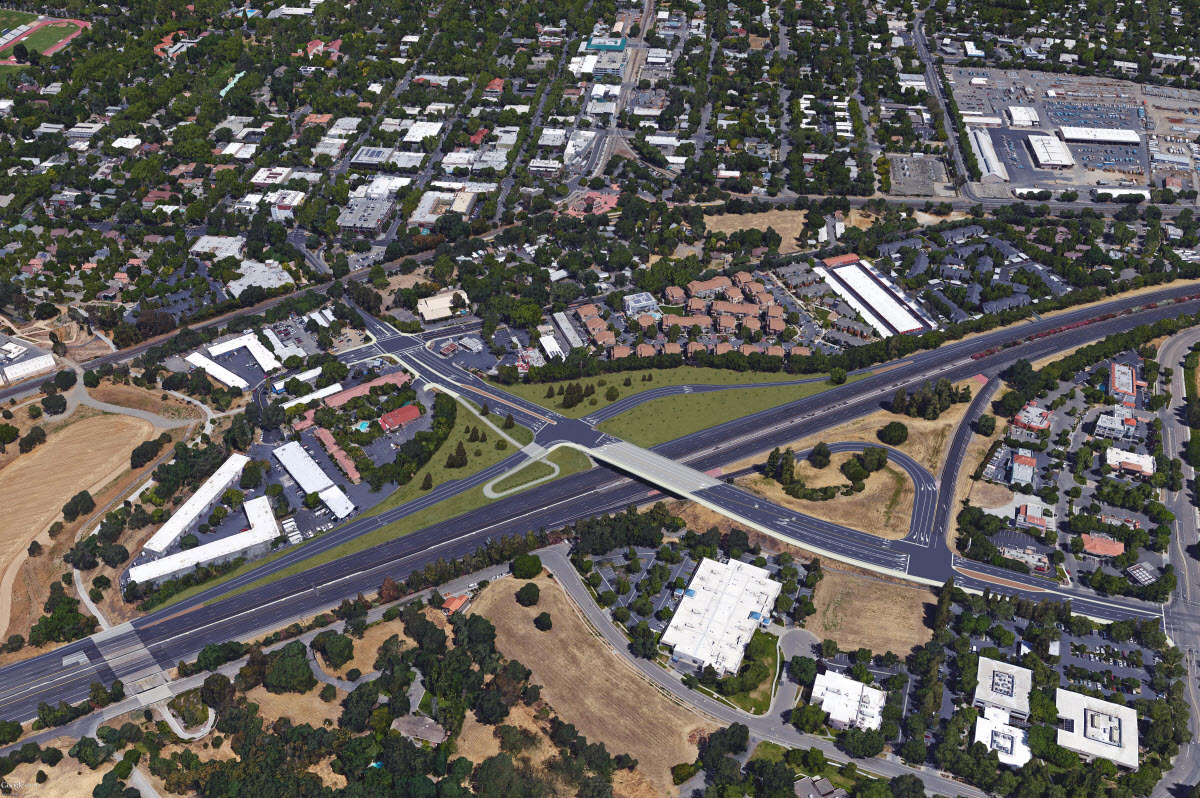 There has been a lot of focus on the Richards Boulevard traffic congestion.  Part of that discussion reemerged in the face of the Hotel Conference Center in conjunction with Nishi.  While the Nishi project would have put money into several improvements to the corridor, there is also the Richards Interchange project that would restructure the I-80 interchange, and is challenging.

With the defeat of Nishi, however, monies for those improvements might be more problematic.  Nevertheless, on Tuesday the staff will present an informational item of the Richards Blvd. – Olive Drive Corridor plan.

Back in February, council authorized city staff to initiate a circulation study and look into the possibility of a capital improvement plan.

Staff writes, “The purpose of the study was to evaluate the Richards Blvd/Olive Drive area holistically by cross-analyzing combinations of potential future growth with possible infrastructure improvements to understand the effects on transportation circulation. Circulation impacts and accompanying order-of-magnitude cost estimates will inform current and future decision-makers regarding future courses of action.”

“This should be considered a conservative analysis; elimination of any development project would result in proportionally better LOS at the intersections studied,” they add. 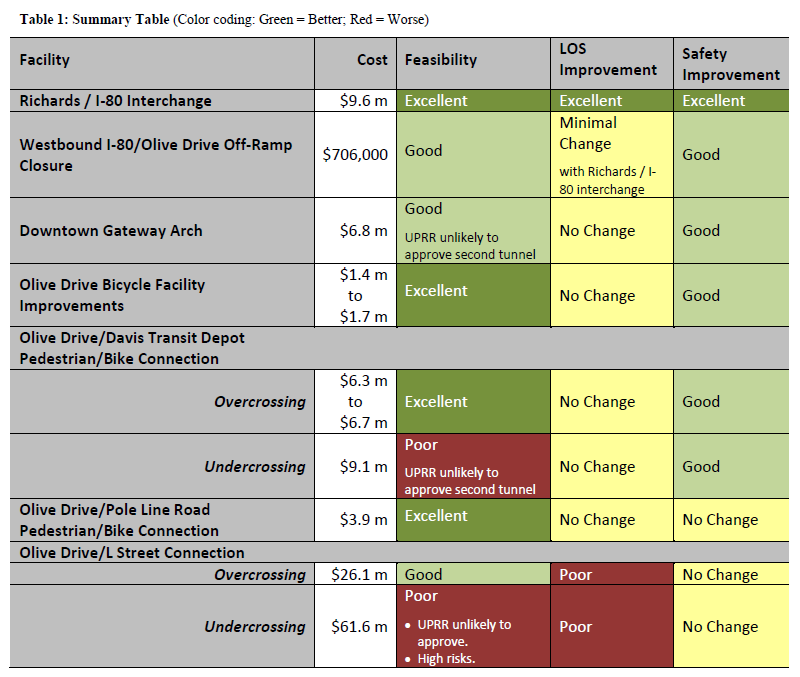 The graphic above summarizes the various proposals, their cost, feasibility and estimations on LOS and Safety improvement.

Based on this, the staff recommends the following.

Staff adds that this would improve circulation for all intersections.  “The Richards / I-80 Interchange project should be considered the City’s highest priority project due to its significant corridor circulation improvements,” staff writes.  They recommend “combining with the Westbound I-80 / Olive Drive Off-Ramp closure due to the relatively low incremental cost and neighborhood traffic calming effects.”

While this would be an expensive undertaking, staff believes “this combined project would be very competitive for State and Regional grant funding.” 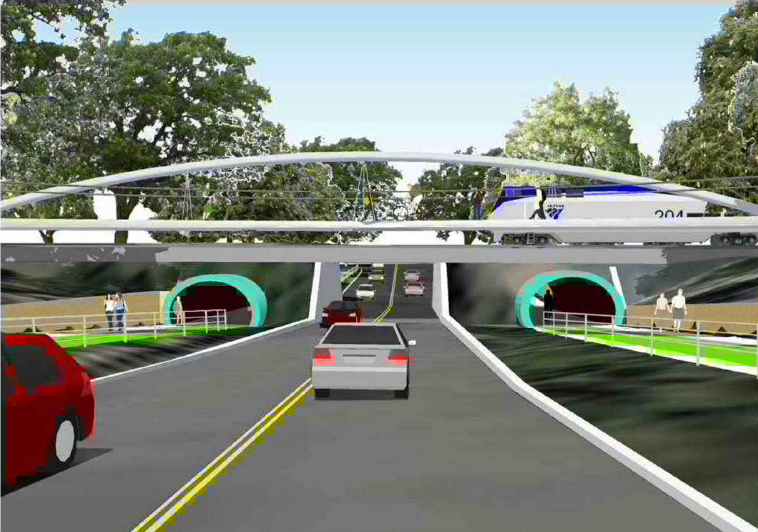 MTCo. believes, “The Downtown Gateway Arch structure over Richards Boulevard would reduce potential conflicts between vehicles, bikes, and pedestrians at the intersection of Richards Boulevard and Olive Drive and directly benefit residents of the Olive Drive neighborhood to access downtown Davis and the UC Davis campus.”

However, they also conclude that “the additional tunnel beneath the UPRR tracks on the east side of Richards Boulevard would not be as beneficial as the majority of walking and biking travel from the Olive Drive neighborhood appears to be directed towards the UC Davis campus.”  They add that “it also appears the construction of a railroad shoofly would be needed prior to installing the new tunnel beneath the tracks on the east side of Richards Boulevard, making construction infeasible without damaging the existing roadway underpass.”

Staff notes, “In addition to the access improvements, the Downtown Gateway Arch presents a welcoming, signature gateway entrance into the downtown.”

While staff sees that the Gateway Arch could be teamed with the other projects, there is a cost consideration in that the total cost would be $18 million for the three projects.  While this could “be partially offset by State and Regional grant funding,” it is cost prohibitive for the city to do it alone.  Staff does not see the Gateway alone as grant-competitive “as a stand-alone project.”

However, they add that “the bicycle improvements could be pursued independently of the other projects if need for improved bicycle facilities is increased, resulting from the completion of development on the Nishi property or with the Lincoln40 project.”

MTCo. believes that both of these options “have merits.” They write, “The Pole Line Road Bike/Pedestrian Connection project would improve access to the US40 Bike Path from the areas north and south of I-80and the UPRR tracks.”

Meanwhile, “The Davis Transit Center Bike/Pedestrian Overcrossing option would provide better access for the residents of the Olive Drive neighborhood and the proposed Lincoln40 project to downtown.”

The higher cost of the Depot Connection “would make the Davis Transit Center Bike/Pedestrian less desirable.”

However, they note that it was not recommended for funding in either program.

MTCo. writes, “The L Street to Olive Drive vehicle connection is not recommended for implementation. The L Street Vehicle Connection project would not provide the anticipated traffic circulation benefits due to the rerouting of trips into downtown away from Mace Boulevard and Pole Line Road / UPRR grade crossings.”

In addition, they believe that the L Street Vehicle Connection project “would substantially alter the character of Olive Drive and surrounding neighborhood with the addition of vertical or underground structures.”

Staff writes, “This facility would shift traffic from Richards Blvd, Pole Line Rd, and Mace Blvd. It would also draw trips from central and east Davis to Olive Drive, degrading Richards/Olive intersection performance to LOS D/E, with the Richards / I-80 Interchange project. The resulting new L Street/Olive Drive intersection would operate at LOS E during the AM peak and worsens with the proposed Lincoln40 project.”

Additionally, they say “the costs associated with both connection options are high. The undercrossing is unlikely to be approved by UPRR and the costs cited in this study do not include those associated with construct(ing) a shoofly as UPRR would require no disruption in their existing operations.”

26 thoughts on “Can the City Fix Richards and Olive? Council to Look at Options”