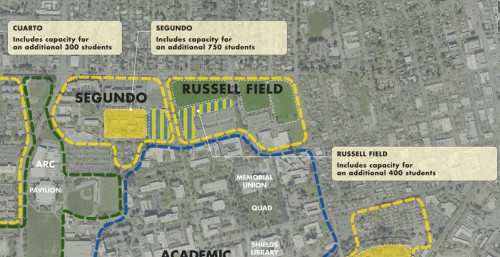 Members of the Davis community once again pushed back against a proposal by UC Davis to potentially put housing on three fields lining the southern end of Russell Boulevard.

Sunny Shine delivered packets to each of the councilmembers with comments from the community against the proposal.

She said she talked to people who “know what the Russell Fields are, know how beautiful they are.  They love them.  They can’t understand why anybody would build on them, they think they are a treasure.”

Senator Wolk’s bill noted that natural and working lands, which include parks and other open spaces, “remove carbon from the air and store, or sequester, that carbon.”

“Those fields are a place where people from all over the world can make friends – lasting friends,” Ms. Shine said.  Whether “you are good or bad, you can play on those fields.  It’s a beloved thing to everybody I talk to..”

She called saving the fields “such a no-brainer.”

Colin Walsh noted that a month ago there was an open meeting between ASUCD and the planners.  That meeting, he said, was followed up with a meeting of the OASR (Office of Advocacy and Student Representation), with Bob Segar from UC Davis in attendance.

He said, “The city council and the city haven’t done that yet.  So far every meeting with the LRDP has been closed.  There are no minutes available and you have yet to take the issue up.  This is the third time we’re here to ask – we would like you to take the issue up and consider the city’s role in this.”

Mr. Walsh said that on Thursday the planners are coming back to the OASR and they are going to propose some alternatives to building on the fields.  “This is going to be a really good time to say that this isn’t an alternative that’s going to be good for the city,” he said.

Mr. Walsh then read from some of the comments they had received.

“UC Davis is expanding without concern for our community. This is a very good example – the continual expansion of the population and the necessary infrastructure have greatly altered the feeling of the community of Davis.  To destroy these fields is a further example of the total lack of concern for the people of Davis by UC Davis.  This open space defines the town-campus boundary in an inviting way.  It’s a mainstay of Davis life…”

A number of other comments focused on the use of the fields for club and other sports, and that the development on those fields would limit space and potential practice time.

Mr. Walsh told the council, “We turned in about 450 comments like this to the university and you have them all in your packet.”

Eileen Samitz said that Citizens for Responsible Planning has a petition online which is asking that “UC Davis provide at least as much housing on the campus as other UCs are.  Which is instead of providing only 40 percent of the student population – all the other UCs are providing 50 percent.”

Ms. Samitz said, “Since UC Davis is going to be bringing in 5000 students within a few years – this is significant.”

“UCD has over 5300 acres, yet historically has provided the least amount of on-campus housing, and that has to change,” she said.

She noted in her op-ed from a few weeks ago, “We identified over 100 acres in the core campus where significantly more student housing could be located.  We made it clear that the Russell Fields should not be paved over.  It doesn’t need to be paved over because there is so much other land that they can be doing high density housing on.”

She noted that, while UC Davis is crying poverty, they just made a $60 million bid on Interland which would have stripped the city of hundreds of thousands in tax revenue.

“Not only is UCD negligent in providing housing for its students on campus, which is unfair to its students, it’s costing our city,” she said.

She said that the “mega-dorm” projects like Sterling Apartments and Lincoln40 are “not only inappropriate because of their size and their design” – those too would be subject to being master-leased.  She urged the council to “always do what’s in the best interest of the city first.”

Share:
Tags:HousingLRDPRussell FieldsUC Davis
Previous : Analysis: How Many Would Trump Deport
Next : Protesters for DAPL March Around Downtown and Block Intersection

93 thoughts on “Citizens Urge Council to Push against Russell Fields”