In recent discussions over land use in the city of Davis, one of the points of contention has been whether the amount of parking allotted is too small.  The Vanguard has repeatedly pointed out through a variety of metrics that fewer students are driving to schools and fewer own automobiles.

The latest travel survey has been released for the 2015-2016 year a few weeks ago with results detailed by Eric Gudz, a recent graduate of the ITS (Institute of Transportation Studies), and Drew Heckathorn, a current graduate student in the ITS.  The results find a continuation of the trend from previous years.

More people are traveling to campus, but the number of people driving has fallen.  Just 22.9 percent of students drive alone with another 5 percent carpooling.  The rest are biking (45.3 percent), walking (7.2 percent), or using the bus (18.6 percent). 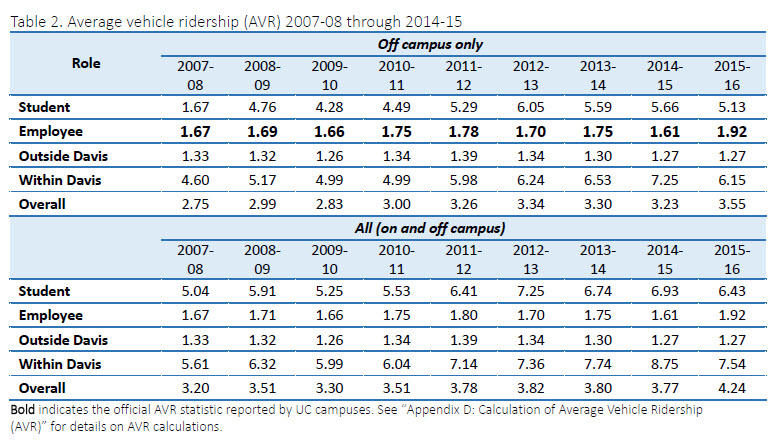 The study calculates the average vehicle ridership (AVR) that “represents the ratio of the number of people arriving on campus to the number of personal vehicles brought to campus.”

Thus, if everyone drove themselves to campus, the AVR would be one.  The greater the value indicates more carpooling or use of alternative modes of transportation.

Although those who used alternative means within Davis seemed to peak in 2014-15 and then fall in 2015-16, overall, the campus increased alternative mode shares from 2015-16 by increasing from 3.23 to 3.55, its highest AVR overall to date.

However, where students live does not seem to be the only driver in the lower AVR.  Slightly higher numbers seem to have access to cars than the previous years.  Of undergraduates, 44.1 percent report having access to a car, compared with 42.7 percent last year.  Graduate students are at 74.5 percent, compared to 70.8 percent last year.  However, faculty and staff have seen their number fall slightly from 93.3 to 90.6 percent this year.

Again, there is a heavy split for those who live inside Davis, 52 percent having access to a car, versus 91.7 percent for those outside of Davis.  It is hard to figure out which groups are driving that figure, but the number has gone up from a year ago.

Drew Heckathorn, a graduate student researcher and masters student within the Transportation Technology and Policy Department, told the Aggie “that these results show that UC Davis is a leader in sustainability.”

But, while that might be a nice achievement, they have done it in a way that is almost counter-intuitive.  The easiest way to reduce carbon footprint is to put the students as near to campus as possible.  And yet, as we all know, UC Davis is near the bottom in on-campus housing.

In a way that makes their achievement all the more impressive, however, they can do better.  By putting more students on campus or in town, UC Davis and the city can better reduce carbon emissions even further.