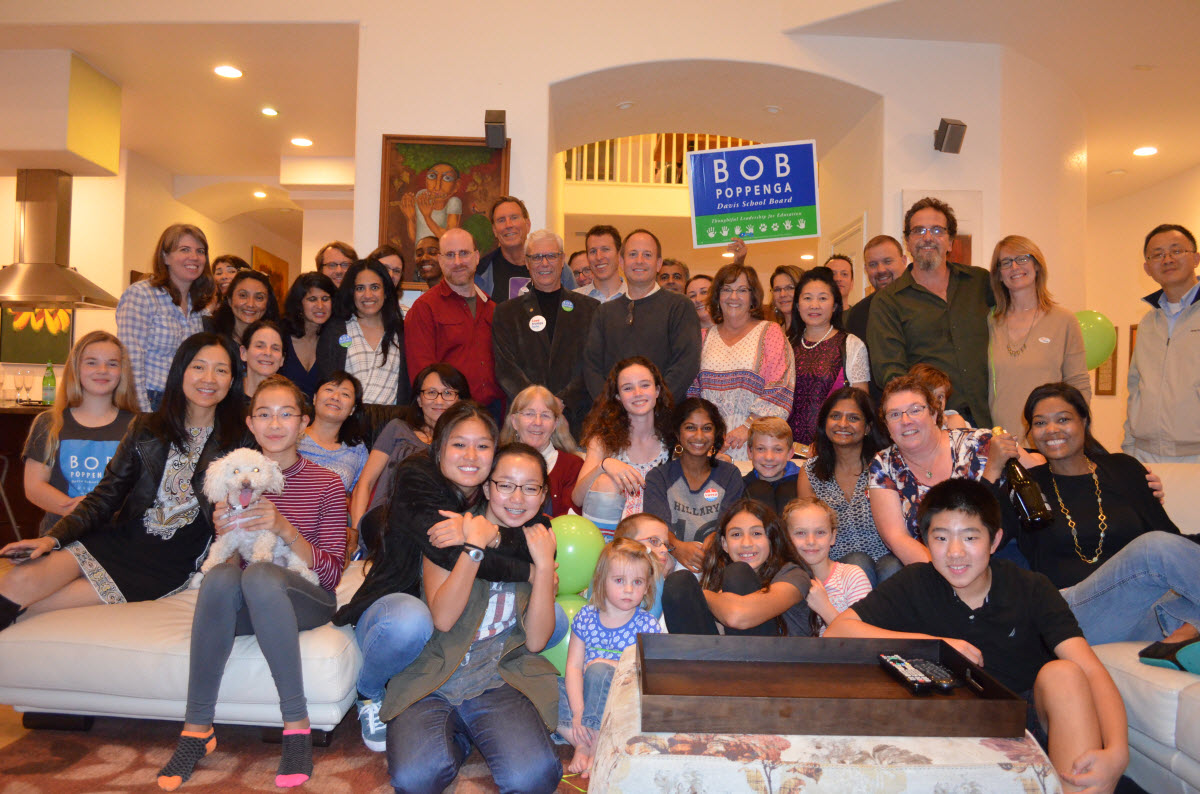 The biggest local race of note was the DJUSD School Board race and, with all of the precincts reporting, the results show that challenger Bob Poppenga has cruised to a first place finish, finishing 1000 votes ahead of second place Alan Fernandes, who is now reelected.

Susan Lovenburg finished third, about 1150 votes behind Alan Fernandes.  While there are undoubtedly still some at-large provisional and same-day vote-by-mail ballots, our experience suggests that these results are more likely than not to hold up, which means the two-term incumbent has most likely been defeated.

Jose Granda received about 4200 votes, or 14 percent of the ballots.

Meanwhile, Measure H, as we called it yesterday, was never in question.  The parcel tax measure started the night at 69 percent of the vote and actually increased its vote share up to 71 percent by the end of the night.  It exceeded the two-thirds threshold by nearly 1000 votes.

Commentary: What To Make of These Results

In just about any other election, it would have been an easy call that Bob Poppenga would finish first.  He clearly, from start to finish, ran the best and most robust campaign.  In fact, I would argue, he ran a campaign that mirrored the ones that Madhavi Sunder ran two years ago, that Robb Davis ran in 2014, and that Brett Lee ran in 2012 and 2016.

He had the most money raised by far.  He had the strongest organization, walking most of Davis if not all, and he had a heavy letter writing campaign.  It’s notable that neither of his opponents had their supporters write letters in the Vanguard, and Bob Poppenga easily had over 30.

The problem was in the absence of polling (which, as it turns out, might not have been all bad), we had no way to know just how well he was doing.

The question is, what happened to Susan Lovenburg?  Recall that early on in the campaign we warned that candidates in Davis running for a third term tend to struggle.  We pointed out that it has been awhile since a school board candidate ran for a third term, but that Sue Greenwald barely won her third term for city council and lost her fourth term in 2012.  Stephen Souza also lost his third term in 2012.

Perhaps it is anti-incumbency, but more likely it was an accumulation of disfavorable actions to various groups.  It was hard to know how deep the potential baggage for Ms. Lovenburg went.

It was she who last spring initiated the AIM changes.  Clearly, that was controversial and the question was how deep that cleavage lay.

Late in the campaign there were a couple of negative letters that tried to tie her not only to the AIM vote, but also to remind the public that she and Sheila Allen wrote the “move on” letter during the height of the Nancy Peterson controversy.  That letter was widely believed to be the downfall of Sheila Allen when she ran for city council in 2014.

Back in 2012, an IE (Independent Expenditure) campaign sent out mailers reminding voters of Sue Greenwald’s memorable blow up with former Mayor Ruth Asmundson.  That seemed to remind voters of her downside, and the letter referencing the Nancy Peterson struggle might have done the same thing.

While this was not a nail biter, less than 1200 votes separated Susan Lovenburg from Alan Fernandes, and those two issues might have made the difference.

The election now completely changes the center of gravity on the AIM issue.  Alan Fernandes was by definition a moderate on the AIM issue before – but with three solid votes in one direction, he couldn’t center the discussion.

He voted with the majority on the initial 2015 motion that ended private testing and directed the administration to look at changes to identification and testing protocols.  He opposed the termination of Deanne Quinn’s contract.  He sided with Madhavi Sunder on keeping three strands open.

In a real sense, Alan Fernandes will have the ability to completely re-write the trajectory of the AIM program.

Other issues that will be worth watching: Bob Poppenga ran on stronger approaches to the achievement gap, and brings a university experience on issues like STEM (Science, Technology, Engineering and Mathematics).

The election of Bob Poppenga along with the reelection of Alan Fernandes maximizes the amount of change in board direction, and it will be very interesting to see how the dynamics change.

Meanwhile, Measure H cruised with 71 percent of the vote.  Once again, it did not receive any sort of organized opposition and it seemed unlikely that the voters would vote it down.  We felt on Tuesday morning that the board should have swung a bit higher, as the need for money is greater than the ask.

Clearly, in one sense the vote indicates that there was room to maneuver.  Given the volatility of the electorate on Tuesday, perhaps in retrospect it was wise to stay the course, but it is hard to know.

Finally, Jose Granda, for a third time as a candidate, was largely a non-factor in the final outcome.  Again, it is interesting to note that he continues to underperform the No on Parcel Tax vote.

Mr. Granda clearly attempted during the campaign to move beyond simply being the No on Parcel Tax Guy.  He clearly recognized there are not enough votes there.  That said, had he simply captured nothing other than the parcel tax opposition, he would have finished with 6000 votes, or 1600 behind Susan Lovenburg for third.

In the end, he underperformed No on Measure H by 1200 votes.  To put it another way, nearly a third of the people (at least) who voted against Measure H voted for a candidate or two candidates other than Jose Granda.