It was a far cry from the aggressive law enforcement tactics at Standing Rock itself, but it was a strange and ominous sign on the local front.

On Tuesday, the Vanguard was on Second Street in Davis covering a local protest of the Dakota Access Pipeline.  A modest-sized crowd of perhaps 100 people gathered outside the building that houses the Army Corps of Engineers, when I saw a police vehicle pull up.

I was a little perplexed by the vehicle as it was not one I had seen before and it was only when I walked up to it that I realized it was a police vehicle from the Department of Homeland Security.

He questioned a number of people – more intimidating in his demeanor than his words – and eventually stood to the side and, when the protesters began to march, he left.

Experienced protesters and longtime community members were shaken and shaking their heads.  All of them were wondering what that was all about.

Compare that to the actions of the local police.  They only arrived when the protesters encircled the intersection of E and 2nd Streets.  Even then, they hung back at least 50 feet, giving the protesters their space to do their thing.

The only time the local police engaged was when a car drove up to the circle and honked its horn repeatedly as though the protesters were going to move.  The police calmly approached the motorist and convinced him to make a u-turn and continue to his destination through an alternative route.

The protesters would eventually finish and leave without incident.

Is the action of DHS Police a sign of things to come, as protesters increase their activity outside of Standing Rock?

The local police at Standing Rock, even before the new president has taken office, in the last few months have engaged in escalation tactics with the protesters.  An early October communication from the ACLU noted, “And for the past six weeks…   the Morton County Sheriff’s Office has dramatically increased its surveillance of the gathering, militarized the county, and taken action to suppress the religious expression of the indigenous people gathered at Sacred Stone.”

They noted “the use of surveillance, military-style force, and religious oppression.” 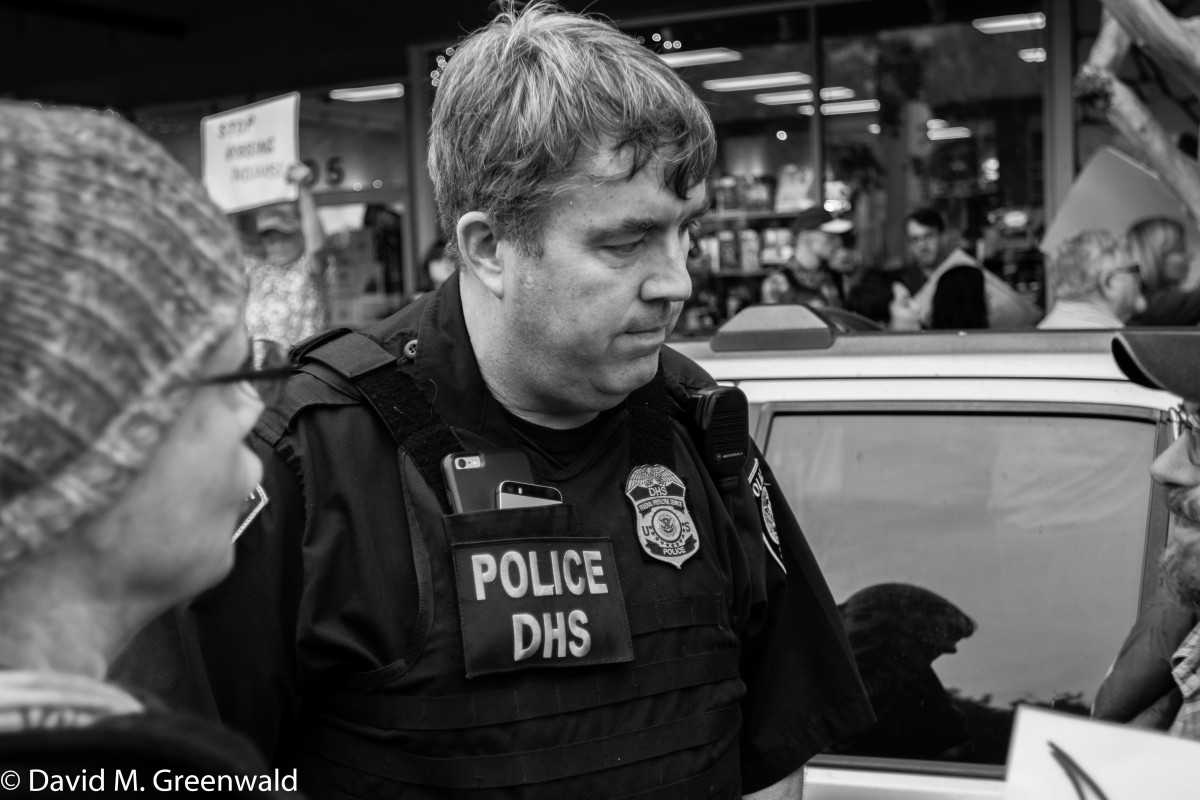 “In mid-August, Gov. Jack Dalrymple declared a state of emergency for southwest and central south North Dakota in response to actions taken by the water protectors. Despite the governor’s and the local sheriff’s verbal commitment to allowing constitutionally protected lawful protest, the result of the state of emergency has been a vast suppression of the right to protest and a dramatic increase in police surveillance around — and above — the camp,” the ACLU noted.

By late October the stand off actually heated up as protesters indicated they would not back down.  Police in riot gear would face off with protesters.  There were mass arrests.  “Tensions are so high that Amnesty International is sending representatives to monitor the arrests,” CNN would report.

It is important to note that these clashes came under the Obama administration.  This past week, the Obama administration announced it would withhold a final permit for completion of the controversial Dakota Access pipeline while it conducts further analysis of concerns that the project will damage sacred tribal sites and water supplies.

But this may be only a temporary victory as the pipeline company’s CEO said to the media last week that the incoming Donald Trump administration will ensure completion of the pipeline.

“I’m 100 percent sure that the pipeline will be approved by a Trump administration,” CEO Kelcy Warren of Energy Transfer Partners — the Dallas-based company funding the $3.7 billion project — told NBC News. “I believe we will have a government in place that believes in energy infrastructure.”

In the coming weeks, it will be interesting to see how DHS interacts with the protesters.