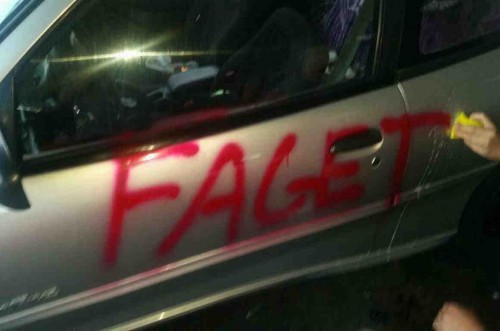 Since voters elected Donald J. Trump president on Tuesday, outbursts of vitriol — verbal and physical — have been widely reported in the news and on social media. Civil rights groups say their inboxes and call centers are lighting up with reports of attacks.”

I think it is important to note at the onset, that these accusations of wrong doing are coming from both sides. There are accounts such as my daughter’s detailed in a former post and there are accounts of students who supported Trump being physically assaulted as “Mexican Haters”. Any one who is willing to pretend that these kinds of actions are unique to one side or the other is simply not being accurate. We are seeing reports of such events on the local and national levels including right here in Davis.

But we are now seeing something that I have never seen before in my 50 + years of following our national politics. For the first time ever, it is our president elect, who can easily be seen on tape exhorting exactly these kinds of behaviors. Now, true, he was only exhorting them from his supporters, but did he honestly believe that susceptible individuals full of hate on both sides would not head his call ?  I doubt that this was deliberate. But then I doubt that he thinks through the consequences of his actions beyond what meets his immediate personal gain in the moment.

Also as quoted from the NYT:

“While all sides of the political spectrum have reported problems, Andrew Anglin, a vocal Trump supporter and a leader of the alt-right movement, called explicitly for intimidation of “brown people” on his neo-Nazi website, The Daily Stormer.

“I am of course against any violence against these people,” he wrote. “However, I do think you should yell at them. We want them to feel that everything around them is against them. And we want them to be afraid.”

Or as another example, blatantly race based fliers are reportedly turning up on a number of college campuses.

It would typically be the role of our political leaders to disavow these kinds of statements as John McCain so clearly did when a woman at a town hall meeting asserted that then nominee Obama was a Muslin, and to provide the accurate information. Now, we have elected a new president who made spreading such lies as birtherism and that President Obama and Secretary Clinton were the “founders of ISIS “a hallmark of his political assent. Do we really believe that our president elect does not embrace hate and anger, especially that which is racist, religiously based, or misogynistic when he is on tape admitting to and promoting all three?  Do we really believe that his intention is to be a president for all the people, when he has placed in a position of great power an individual, Steven Bannon, who clearly is sympathetic to racist, misogynistic and anti-semiotic points of view even if he cannot be demonstrated to have said so in his own words, by his choices for publication ?

Now in fairness, our president elect has made one plea to his followers to stop the attacks on minorities. One plea, as opposed to months and months of verbally fanning the flames of resentment, fear and anger. I wonder which is likely to have more impact on those inclined to act out of hatred ?

We will indeed reap what we have sown and the little sprouts of hatred are already proliferating on both sides of the political spectrum. This is what a minority of voters , but enough to win the Electoral College apparently wanted or at least were willing to dismiss. But I ask again, is this really what we want for our country ?

43 thoughts on “Vandalism, Threats and Violence”