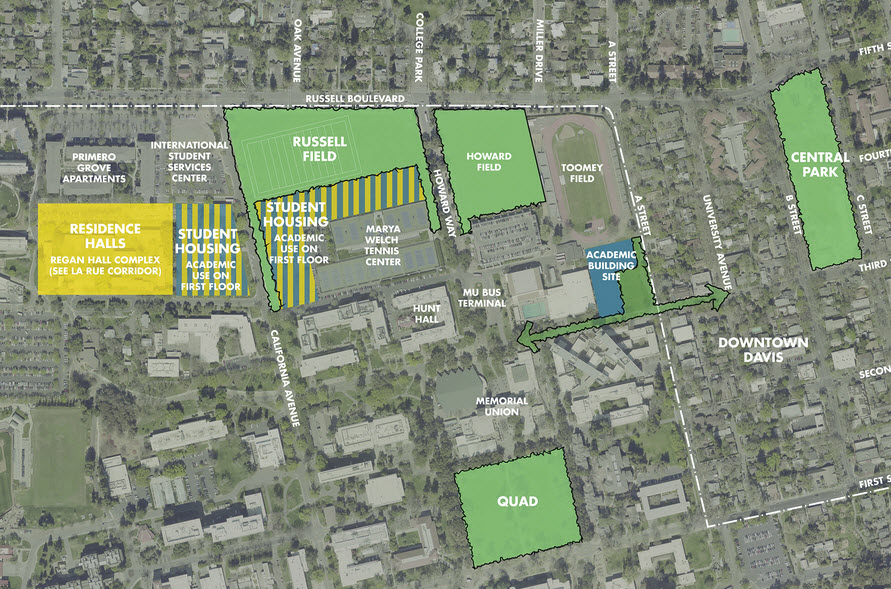 In a lot of ways UC Davis seems to understand the political landscape in Davis, with regard to housing, fairly well.  But the current LRDP (Long Range Development Plan) still has not removed the potential for housing on Russell Field, even though it reduces the proposed number of students living there from 1000 down to 400.

On their webpage, the university notes, “The plan retains the full east to west dimension of Russell Field between California Avenue and Howard Way as a large open space for campus recreation and intercollegiate athletic programs, as well as other campus functions. The Plan also retains Howard Field in its entirety.”

The page continues, “Altogether the revised plan retains 7 acres of field for on-going recreation when compared to the previously contemplated student housing proposal. The Plan would reduce the loss of recreational fields by proposing to redevelop an existing surface parking lot and a low density, one story office building.”

The plan right now is to increase the percentage of students living on campus from 35 percent of the undergraduate population up to 40 percent by 2027, when UC Davis will have about 40,000 students.

The sticking point seems to be the Russell fields.  Acting Chancellor Ralph Hexter told the regents this week that residents pushed back at the development of housing on the athletic fields along Russell Boulevard.  When they did so, the plan was revised, reducing the housing.

He told the regents that, through the give and take of the LRDP project, “we try to make sure that the residents are as happy with us being their largest employer and largest supplier of renters as they possibly can be. And we continually work with them.”

He said, “Over time, they’re going to have to recognize, ‘Well if you don’t want that (housing on Russell Field), you need to help us find more places for students to live in the city.’ So again, it’s dialogue.”

While in some ways, it seems that UC Davis’ leadership gets it, in other ways they seem to be a bit tone-deaf.  Right now the Russell fields plan is projected to take on just 400 of the 6200 additional students – is it really a deal breaker to eliminate the remaining 400 units and put them elsewhere on campus?

The residence halls would accommodate a portion of that increase.  Tercero is projected by 2017 to accommodate an additional 500 students.  The campus is expected to provide “capacity for an additional 750 students in the Segundo neighborhood, with the redevelopment of the Regan Hall complex and an additional dining facility.”  Cuarto would house another 300 students.  That adds up to about 1550, or nearly one-quarter of the new student population.

A big portion of the new capacity will come at West Village.  Immediately, they will start doubling up students to increase capacity by 624, with another 1626 students to be added through additional development.

Then you have the redevelopment of Orchard Park, which would accommodate an additional 900 students, while Solano Gateway would increase the net number of students from 500 to 1100.

The Campus Tomorrow site notes that the “revised plan does not include a roadway connection from campus into the Nishi property. This revision reflects the recent decision by the City of Davis to not approve the Nishi development proposal.”

The Vanguard reported back in September that there were proposals from the land developers to try to flip the Nishi site to the university.  Although at this point, we do not know specifically what the university’s response was, we also see no alteration in their plan.

Ralph Hexter this week told the regents that, while the Nishi property was “very, very attractive” for development – it was narrowly defeated in election by the voters, which in his view illustrated the community’s reluctance for growth.

From our perspective, the university is being a bit silly on maintaining the need for Russell Field to be developed in light of the very strong opposition to the development – not only by people living adjacent to the site, but by the community as a whole.

Acting Chancellor Ralph Hexter suggested the need for the community to agree to alternative locations for the housing, but at 400 units there seem to be several good alternatives.  One would simply be to expand plans for housing additions at West Village – the site and surrounding area would seem to easily be able to accommodate the 400 units proposed at Russell Field.

There is another possibility – given the planned expansion at other sites like Orchard and Solano Parks, the university could add some units to each site

Of course, for some, what UC Davis is proposing is not enough.  At the council meeting on Tuesday, Eileen Samitz pushed for “UC Davis provide at least as much housing on the campus as other UCs are.  Which is instead of providing only 40 percent of the student population – all the other UCs are providing 50 percent.”

Ms. Samitz said, “Since UC Davis is going to be bringing in 5000 students within a few years – this is significant.”

“UCD has over 5300 acres, yet historically has provided the least amount of on-campus housing, and that has to change,” she said.

Almost everyone we have spoken with believes that UC Davis has not done enough on student housing on campus and needs to do more.  Where consensus breaks down is at what point has UC Davis done enough and the city not done its share.

The dividing line is remarkably narrow – but it is there with the community.

The council is planning to have an update on the progress and process at its December 6 meeting.

91 thoughts on “My View: Campus Should Be Able to Avoid Housing at Russell Fields”