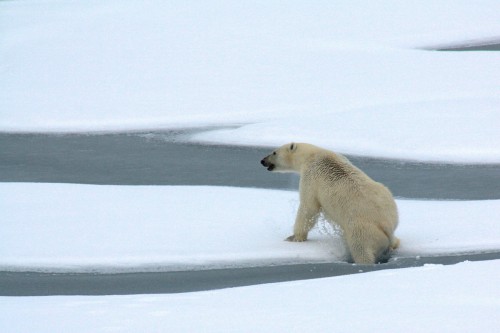 “The metaphor is so obvious. Easter Island isolated in the Pacific Ocean — once the island got into trouble, there was no way they could get free. There was no other people from whom they could get help. In the same way that we on Planet Earth, if we ruin our own [world], we won’t be able to get help.”
― Jared Diamond, Collapse: How Societies Choose to Fail or Succeed

As the United States’ 45th President-elect approaches inauguration, he has promised the American public that there will be many changes made to the current levels of environmental protection.  We truly do not know how to predict the promised changes. His statements range from allowing the fossil fuel industry to run rampant on public lands to requiring NASA to focus on space exploration rather than climate change.  One thing is certain, the President-elect’s disbelief that climate change is real and human caused has many scientists very concerned.  One area of great concern is the Arctic and the increase of melting sea ice in the region.

On Friday November 25, 2016 The Arctic Resilience Report was issued along with a stark warning. Changes in the Arctic that include increasingly rapid melting of the ice cap risks triggering runaway greenhouse effect. Runaway greenhouse effect is a term that scientists use to describe runaway climate change or runaway global warming and is hypothesized to follow a “tipping point” in the climate system that could initiate a reinforcing positive feedback. In other words, it won’t stop and there will be nothing that humankind can do to make it stop.

The report describes the potential of triggering not one but 19 tipping points in the region that could have catastrophic consequences around the globe. These tipping points may be “abrupt and unexpected and beyond which return is difficult or unlikely.”

Some of the most notable tipping points are:

Noted as the first comprehensive study of ecosystems and societies in the region, The Arctic Resilience Report also found that the “potential effects of Arctic regime shifts [or tipping points] on the rest of the world are substantial, yet poorly understood. Human-driven climate change greatly increases the risk of Arctic regime shifts, so reducing global greenhouse gas emissions is crucial to reducing this risk.”

With effects felt as far away as the Indian Ocean (showing us that “global is now the new local”), climate change is the most pervasive threat to the Arctic region. The report notes other environmental issues that are contributing factors to Arctic sea ice melt. Resource demand, transportation needs, migration, geopolitical changes and globalization are all making great impacts on the Arctic.

The Arctic ice cap is important to all of us, not just to the polar bear and arctic fox.  This rapidly vanishing veneer of ice and snow helps to cool sea and air temperatures and reflects much of the sun’s radiation back into space. It also acts as a global air conditioner when winds and ocean currents swirl over and under it. Long known to play a key part of the global climate system, the region’s sea ice has dramatically declined over the past decade, leading to forecasts of an ice-free Arctic Ocean as early as the 2030s.

According to the National Snow and Ice Data Center (NSIDC), this year, Arctic ice has experienced a drastic melt, shrinking to its second lowest level in recorded history, but the difficulty and expense of close monitoring have meant that scientists have only in recent years been able to make detailed assessments.

“It was a stormy, cloudy, and fairly cool summer,” said NSIDC director Mark Serreze in a press release. “Historically, such weather conditions slow down the summer ice loss, but we still got down to essentially a tie for second lowest in the satellite record.” “It really suggests that in the next few years, with more typical warmer conditions, we will see some very dramatic further losses,” added Ted Scambos, NSIDC lead scientist.

“I have often asked myself, “What did the Easter Islander who cut down the last palm tree say while he was doing it?” Like modern loggers, did he shout “Jobs, not trees!”? Or: “Technology will solve our problems, never fear, we’ll find a substitute for wood”? Or: “We don’t have proof that there aren’t palms somewhere else on Easter, we need more research, your proposed ban on logging is premature and driven by fear-mongering”? Similar questions arise for every society that has inadvertently damaged its environment.”
― Jared Diamond, Collapse: How Societies Choose to Fail or Succeed