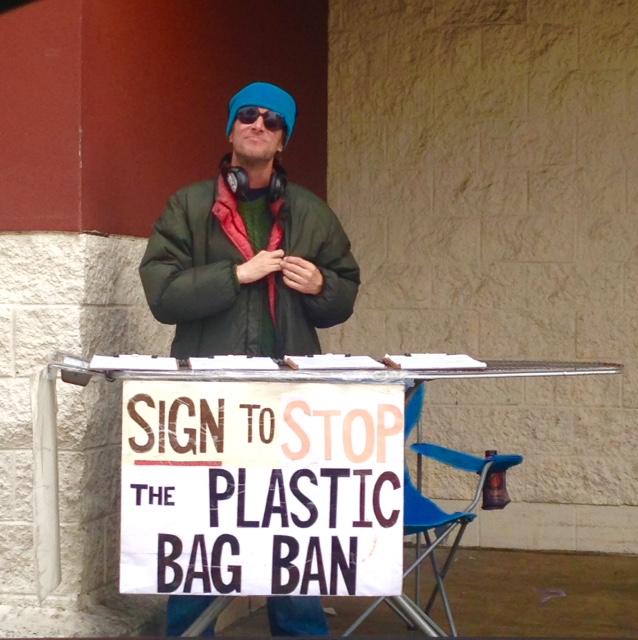 When the plastic industry put the plastic bag ban on the ballot, it seemed to me unlikely that they would succeed in overturning the statewide law.  Why?  Because by the time the election happened, over 100 cities and counties had already enacted their own legislation – so, for millions of people in California, the issue was already decided before the state belatedly acted.

The critics argued – why should Davis enact a plastic bag ban, we are tiny compared to the billions of bags across the state?  Plastic bags from Davis were not going to travel across the waterway.

This argument was led by columnist Bob Dunning, who wrote last year, “I remember back when the city of Davis was thinking of imposing a plastic bag ban on the citizens of this fine town, the argument that kept bubbling up was that Davis plastic bags were somehow ending up in the Pacific Ocean.”

He added, “This notion caused me to go on dozens of Sunday rides through the countryside in the interest of journalistic accuracy to see if I could determine exactly where and how these errant plastic bags were finding the open sea.”

The reality is that, while Davis by itself may not have made a difference, Davis became part of the critical mass that led to the ballot measures being non-issues.

Hans Johnson, in a column in the Bee this week, notes, “When Californians voted twice last month to uphold our statewide ban on throwaway plastic bags, the result showed that the progressive social consciousness of the state is deepening even as diversity grows.”

He argues, “It also shows a promising path to making progress during the Trump administration by advancing social and economic justice through city halls and state capitals across the country.”

He notes, “Striking those chords of social conscience helped bag ban supporters reach voters concerned about corruption of the democratic process. Plastic manufacturers from outside California spent $6 million to get the measures on the ballot, a fact that backfired badly.”

For me the biggest point here is that local governments – ignored heavily by the left over the past two decades – hold the key to progressive policy making.

The LGBT community is another model that progressives should be looking towards.  In article we ran this week, James Esseks, the Director of the ACLU LGBT and HIV Project, writes that while North Carolina failed to repeal “the state’s hateful anti-LGBT law it passed in a hurry last March,” the law “is still on the books and still causing harm to North Carolinians every single day. “

He writes, “Despite the paralysis in Raleigh, there is a clear political lesson here for the rest of the country:  The public doesn’t like anti-LGBT laws.  Yet other state legislatures are likely to consider bills similar to North Carolina’s HB2. So as state legislatures gather to start their sessions in early 2017, they should take note: Hate doesn’t sell. “

The key is that “the public reaction to the law was swift and relentless.”

Mr. Esseks outlines: “PayPal canceled an expansion that would have brought 400 jobs to the state. Deutsche Bank froze plans for 250 new jobs as well.  Conventions canceled left and right. Performers from Bruce Springsteen to Pearl Jam to Cirque du Soleil to Maroon 5 to Itzhak Perlman canceled shows.  And then the sports leagues weighed in: The NBA pulled the 2016-17 All-Star Game from Charlotte. The NCAA moved all seven of its 2016-17 championships out of North Carolina.  And the Atlantic Coast Conference moved all of its 2016-17 championships out of the state as well.”

He writes, “That’s backlash at a cultural level.”  He notes that, while the economic cost is hard to quantify, “estimates reach many hundreds of millions of dollars.”

Mr. Adachi two weeks ago vowed to keep fighting for due process for immigrants in detention, after the mayor struck a deal that fell far short of the $5 million plan to provide attorneys to all immigrants facing deportation.

“While the $1.2 million is a piece of the plan, it will fall short of helping those who need it most, people locked away in civil immigration detention,” Mr. Adachi said.

“These San Franciscans are cut off from their families and communities and forced to defend themselves against trained government attorneys unless they can afford to hire a lawyer,” Mr. Adachi said, adding that half of all immigrant detainees have lived in the U.S. for more than a decade.

“These are our neighbors, and they should not be locked up indefinitely without legal representation,” he said.

At a press conference to announce the bills, Senator Hueso, Vice-Chair of the Latino Legislative Caucus, said the measures “send a clear message to undocumented Californians that we won’t turn our backs on them. We will do everything in our power to protect them from unjustified deportation. In California we embrace people of all walks of life who work hard and contribute to our economy and that won’t change now.”

The message here is very clear – progressives need to fight back using any means necessary.  And it has to start at the local level.

Progressives need not to let the naysayers sway them – what seems to be an insignificant action at the local level can turn into a movement that overwhelms the opposition, even when the opposition has huge resource advantages.

6 thoughts on “Commentary: If You Build It, We Can Overcome”