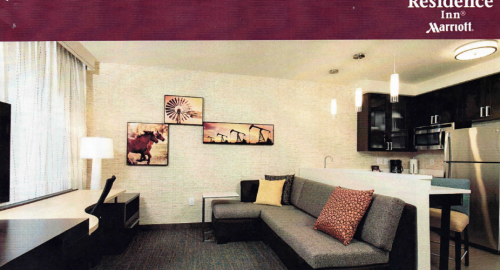 It is perhaps not ironic that the short discussion on Tuesday night focused on sustainability rather than revenue, but it is interesting that the Marriott Residence Inn being able to check off the LEED gold certification was the step that allowed the council to support the otherwise non-controversial hotel at the intersection of Mace and Second Street.

It was a 4-0 vote because Rochelle Swanson, erring on the side of caution, recused herself because she resides within the 500 foot radius of the other, more controversial hotel proposal.  Harriet Steiner, city attorney, reasoned that, because the hotels were linked at one point and because this one is going first, a vote on this might impact a vote on the other.

The quiet passage of the Residence Inn will undoubtedly be in marked contrast to the scene on December 20 when the Davis City Council has to decide the much more controversial Hyatt House Hotel.  In November, the four members of the council showed support for a project there, but decided to give talks another chance to get developers closer to the wishes of neighbors – if that is even possible.

The Residence Inn is expected to bring in $1.8 million in one-time development and construction fees.  A big concern we have seen since the start of the hotel discussion has been the need for the city to capture some of the leakage of hotel stays into neighboring communities.

We have never seen a full quantification of that leakage.  But there is an abiding belief that the presence of modern and new brand-named hotels will generate more stays in Davis.  Matt Williams noted during public comment that the city’s TOT (Transient Occupancy Tax) grew dramatically when UC Davis opened the Hyatt Place hotel a few years ago.

Dan Carson’s analysis suggested that both these projects would provide a net fiscal benefit to the city in the hundreds of thousands, plus one-time benefits of just under $2 million per project.

Mr. Carson believes that the Hyatt House would have a net fiscal benefit to the City of Davis of $650,000 annually, while the benefit from the Marriott would be about $600,000.

Mr. Carson did caution, “As you deliberate about these projects, you will have to weigh the potential fiscal benefits to the city against other considerations, such as your land-use policies and the additional set of criteria you have adopted for such projects.”

While hotels are not going to solve the fiscal woes of the city, a $1.3 million benefit on an annual basis with a nearly $4 million one-time benefit would greatly help the city.

Uncertainty continues to rule on whether the Royal Guest, even with the settlement in their lawsuit, will ever construct a hotel conference center at the corner of Richards and Olive.  Some sources have told us that the conference center portion – which would expect to be a huge demand generator for city hotels – is off the table, but Mike Webb told the Vanguard last week that he could not confirm this.

While this is all a good start, it also represents a drop in the bucket.  With the city already facing hundreds of millions – perhaps as high as $655 million – in unfunded infrastructure needs over the next 20 years, and an increasing annual hit on pensions, the amount of revenue generated by hotels is just the beginning.

As Mayor Robb Davis pointed out, if salaries grow by 3 percent, which is the level that CalPERS assumes and a level that keeps up with a traditional cost-of-living increase, “the pension contributions will require an additional $5.3 million per year.”  That is on a $60 million or so general fund.

Mayor Davis told the Vanguard, “If the average annual General Fund revenue growth of the past 15 years continues for the next five (the 15-year trend is 4.8% per year), fully a quarter of the increases will be consumed uniquely by pension and retiree medical cost increases.”

“Something must give,” he said.  “Thus, I am less sanguine than our City staff.  In fact, it is not clear to me at this point how we are going to cover everything over the next five years, given that we are not even covering critical infrastructure backlogs now.”

The council put some of this on the table with the university.  They laid out, in their LRDP response, the need to increase commercial and R&D space within the city.  The council wants to “explore opportunities for City/UC Davis collaboration on how best to gauge and accommodate spin-off business space needs stemming from on-campus research.”

While the city will undoubtedly receive a boost, both from the expansion of Sierra Energy’s Area 52 as well as Fulcrum’s investment in the University Research Park, so far the big scale innovation centers have remained off the radar.

The Mace Ranch Innovation Center, for example, could have generated somewhere between $2 and $7 million annually, in addition to the one-time payout.

Hotels and economic development alone might not generate the kind of revenue we need by themselves.

Mayor Robb Davis said, “I believe we must discuss cost containment—broadly writ—and put a revenue measure before the population in the next two years.”

The mayor said, “It is no exaggeration to say that over the coming 5 years (and beyond) we need an additional $15-29 million each year to cover all these costs combined.”

But a robust economic development plan could cut that necessary cost in half and make the hit to taxpayers more reasonable.