The debate and dialogue about housing availability is once again alive and well in the community of Davis.  It is probably one of the most important policy debates and one of the most emotionally charged conversations that we have as a community. As an observer and participant in the discussions for more than three decades now, I believe that we have allowed the policy debate to get framed in a false narrative. The new framework for debate makes the following assertions “The University is not doing their fair share and the solution to meeting Davis’ housing needs should focus on campus.  We wouldn’t have a housing problem if the campus weren’t growing and if the students would just live on campus.” That is the current refrain that I don’t believe is supported by the facts.

As our housing crisis becomes more acute, I find this admonition not very constructive and not offered in the spirit of collaboration, shared responsibility or partnership. Two weeks ago, I attended the City Council meeting in which representatives of UCD reviewed their updates to Long Range Development Plan (LRDP) for the Campus. The council chambers were filled with folks wanting to voice their concerns about proposed housing on the Russell fields (UCD has since abandoned that concept) and with numerous folks who blamed the housing crisis that we face on the University. It was interesting to watch how the debate is being framed as “merely a campus problem”. To me, that is clearly not the case. The solution needs a change of direction by the City and an increased focus by the University.

Words matter and the current narrative only focuses on a portion of the equation rather than providing the basis for a solution. It is a bit like saying: “Do as I say, not as I do.” Or said another way, “Don’t imitate my behavior, but obey my instructions.”  The problem with an inadequate supply of housing is a community and campus problem that will need the University, the City, the private sector and non-profits to accept shared responsibility and work together to come up with solutions. I believe the questions to better frame the conversation should be “What can the City of Davis and the University each do to better address the situation?” What can be done to stimulate more investment in rental housing within our community?” Good partners and willing collaborators meet their mutual fair share and hold one another accountable and lend a hand to one another to achieve a shared objective. Aligning policy objectives to meet unmet housing needs should be the goal. We must acknowledge our current strengths and weaknesses and take action independently but together to meet tomorrow’s needs!

At the Council meeting, the City Planning Staff and the City Council reviewed draft recommendations to the proposed Long Range Development Plan.  One of several City preferences related to housing is as follows “UC Davis should commit to more aggressive accommodation of on campus housing commensurate with anticipated growth and to balance community wide housing needs (such as: 100% of first year students and 50% of student population, or more desirable vacancy rate of x% translates to y units) [1] The conversation did not yet lead to a clear pledge of what the City Council proposes to do to increase supply within the City as well.  I believe the City Council needs to commit to update our General Plan, similar to what the Campus is doing, and needs to zone a sufficient number of sites for multi-family housing!

I thought that it would be illustrative to offer an analysis (see chart) of the number of apartments that have been built in Davis or on Campus in the last decade (since January of 2005) to add some facts to the conversation. I think that numbers will surprise most readers.

I developed the list from a proprietary third party database that tracks the apartment market and from personal market knowledge.  This data includes multi-family rental projects, and does not include “for sale” town houses, condominiums, or assisted living senior facilities such as Carlton Senior Living, nor does it include campus dormitories. In an effort to fact check, I sent my preliminary information to the Planning Department at the City of Davis and to the Campus Planning and Campus Real Estate Departments asking that they check my initial numbers for accuracy and I then received their comments, suggestions, and corrections. I have done my best to provide accurate information, and take full responsibility for any oversight or errors. 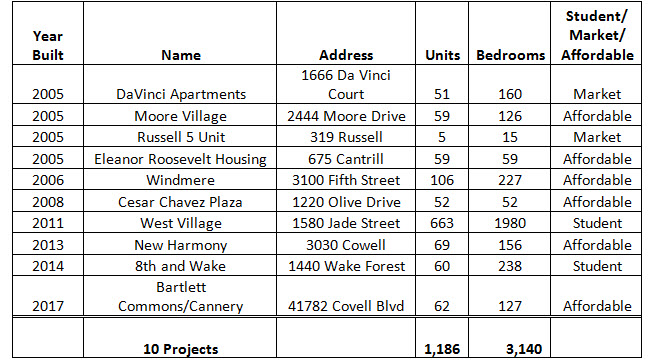 Of particular note is the fact that the Campus has provided on their land and in public private partnerships 61% of all apartment units built and 68% of all bedrooms built since 2005!  The City of Davis has encouraged and stimulated, primarily through their policies which obtained land dedications and various exactions associated with earlier developments, 407 units and 747 bedrooms of affordable housing for 34% of total new apartment construction.  It should be noted though that most if not all of the “affordable housing eligibility requirements” prohibit student renters. Also, note that only 5% of the units are “market focused” within the City of Davis.  That amounted to only 56 units and 175 beds. In other words, less than 5 units per year for the past dozen years have been market rate.  Not one market rate project has been built in Davis since 2006!  When I describe “market units,” they can be for students, individuals and families who seek rental housing choices within our community.  They are not income restricted nor are they exclusively for students.  That being said, we are aware that there are a several potential projects in the works, each one of them trying to perfect zoning, address CEQA issues, as well as neighborhood concerns, including Sterling, Lincoln 40 and Trackside. 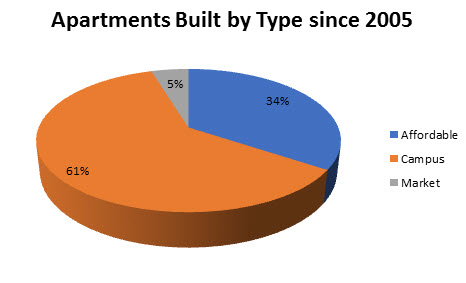 So what can we do?  We have a Campus that is going to grow to serve the needs of the citizens of California and those yearning for higher education from around the globe.

Clearly, UCD was relatively successful in delivering units since 2005. I think we should acknowledge their efforts and encourage them to do even better.  Today their pipeline for additional housing is not filled to meet pending needs.  The evolving LRDP is planning to “densify” many areas where student housing now exists.  They should remain focused and committed to creative approaches to deliver their fair share of student housing. Their efforts and results should be applauded. The Campus seeks to support the academic enterprise, enrich community life, and create a sustainable future, and it is not their intention to destroy the character of our or their community. Being housing developers is not their core mission but one of a myriad of responsibilities that they have.

That said, their challenges are significant.  It should be noted that providing housing for students is only a small portion of the construction that the Campus has to plan for and develop. Other Campus demands for capital and investment includes additional classrooms, lecture halls, laboratories, offices, and additional educational infrastructure.  The Campus also has to focus on delivering faculty and staff housing as well, which they are working on at West Village.

Furthermore, it is worth noting that on campus housing development is filled with additional challenges, including complex land leases, lack of adequate infrastructure, some locations that are removed and isolated from other aspects of the community, and current residents who are in very old units with low rents who want to keep their rents “so low” that the housing would be built at a significant economic loss or more likely not built at all.  Clearly it is complex and to any observer that studies the situation with and open mind, there are a myriad of conflicting public policies.

One of the solutions that the Campus is offering, which I hope is only a very short term solution, is asking nearly 700 students to “double up” at West Village.  I believe that this encourages overcrowding and results in less privacy, and is at best a short term fix.  I believe that it will trigger many unintended consequences.  How many upper division students want to share a bedroom?  If they are forced to do so, will that diminish their college experience?

I believe it is very important that the City of Davis (residents, voters, and Council Members), recognize that we are not doing our fair share to provide rental housing opportunities for students and other community members.  I believe if we want to insist that the University provide housing for 50% of the students then our City Council, Planning Commission, and City Staff need to accept responsibility, be collaborative leaders and show how we are going to be a “true partner” and provide for our 50% share as well!  We have to face the facts that we have created too constrained of a supply to meet our community’s existing and future needs.  We have an outdated General Plan that has not provided an adequate supply of housing choices for today or for the future.  We are mired in controversies and impacts related to spot zoning and have triggered neighborhood concerns by failing to plan for our future.

We have seen “mini-dorms” sprout up and exacerbate neighborhood concerns.  We have seen neighbors in old east Davis and near Rancho Yolo and now even College Park react negatively to proposed apartments near them. We have reached a point where the regulatory restrictions are limiting the ability of the market and of apartment and housing developers to deliver a new supply.

We should be proud of our accomplishments as it relates to the difficult task of providing subsidized affordable housing. But matters have gotten so far out of balance that we are now building 7+ affordable units for every market rate rental in the City of Davis.

To me the issue going forward is how do we create high quality market rate rental units?  We need to quit blaming the University for our growth problems and instead join them in trying to leverage opportunities and find solutions.  Anyone who has been to Los Angeles, Seattle, Portland, San Diego, Philadelphia, and Boston and looked at the mixed-use rental housing getting constructed there and in other University communities as well, knows that market rate rental housing can bring great choices and amenities to our community.   In many ways, better planning and more density can lead to environmentally preferred alternatives.

Let’s change the narrative.  Our community, the City of Davis and the Campus, have a problem.  We need additional rental housing.  Let’s figure out what we can both do to address the situation.  Let’s work together to provide opportunities and increase the available supply.  Our neighbors, our children, and the citizens of California will thank us if we make good choices and work collaboratively.

Jim Gray, CCIM / LEED AP is a Senior Director at Cushman and Wakefield Commercial Real Estate.  He has a degree in Housing and Community Development from UCD.  He has been a resident of Davis for 41 years and was one of the developers of the Northstar Subdivision, and is a partner in the Arlington Farms Apartment Development.  Gray was a member and Chair of the Yolo County Planning Commission.  He chaired the first Affordable Housing Task Force in Davis and he was founder and chairman of Davis Community Housing, now CHOC.

66 thoughts on “Guest Commentary: Housing is Our City and Campus’ Shared Responsibility”