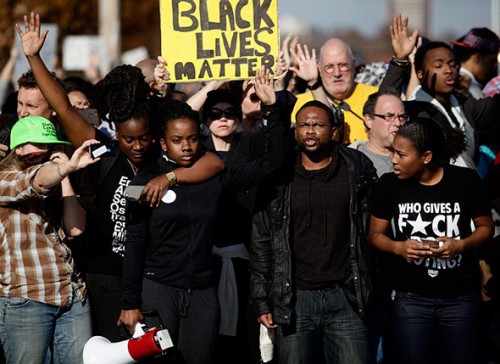 A report last week from the Economic Policy Institute found “overwhelming evidence that having an incarcerated parent leads to an array of cognitive and noncognitive outcomes known to affect children’s performance in school.

“Independent of other social and economic characteristics, children of incarcerated parents are more likely to misbehave in school, drop out of school, develop learning disabilities, experience homelessness, or suffer from conditions such as migraines, asthma, high cholesterol, depression, anxiety, and post-traumatic stress disorder,” the report finds.

“Simply put, criminal justice policy is education policy,” said EPI research associates Leila Morsy, who co-authored the report with Richard Rothstein. “It is impossible to disentangle the racial achievement gap from the extraordinary rise in incarceration in the United States. Education policymakers, educators, and advocates should pay greater attention to the mass incarceration of young African Americans.”

“Despite increased national interest in criminal justice reform, President-elect Trump has promised to move in the opposite direction by advocating for a nationwide ‘stop-and-frisk’ program,” said Mr. Rothstein. “While the chance of reform on a federal level may have stalled, advocates should look for opportunities for reform at the state and local levels, because many more parents are incarcerated in state than in federal prisons.”

The authors advocate for a number of policies to address this problem by reducing incarceration, including eliminating disparities between minimum sentences for possession of crack versus powder cocaine, repealing mandatory minimum sentences for minor drug offenses and other nonviolent crimes, and increasing funding for social, educational, and employment programs for released offenders.

Bias on the Bench

Reporters for the Sarasota Herald Tribune, examining Florida in an exhaustive investigative report, found, “Justice has never been blind when it comes to race in Florida.”  They find, “Half a century after the civil rights movement, trial judges throughout Florida sentence blacks to harsher punishment than whites.”

This is a study that needs to be replicated in California and Yolo County.

Half a century after the civil rights movement, trial judges throughout Florida sentence blacks to harsher punishment than whites, a Herald-Tribune investigation found.

They offer blacks fewer chances to avoid jail or scrub away felonies.

They give blacks more time behind bars — sometimes double the sentences of whites accused of the same crimes under identical circumstances.

Florida lawmakers have struggled for 30 years to create a more equitable system.

Points are now used to calculate sentences based on the severity of the crime, the defendant’s prior record and a host of other factors. The idea is to punish criminals in Pensacola the same as those in Key West — no matter their race, gender or wealth.

But the point system has not stopped discrimination.

The key to the study is the exhaustive effort to control for underlying characteristics in order to produce a “valid comparison.”

The Herald-Tribune spent a year reviewing tens of millions of records in two state databases — one compiled by the state’s court clerks that tracks criminal cases through every stage of the justice system and the other by the Florida Department of Corrections that notes points scored by felons at sentencing.

Reporters examined more than 85,000 criminal appeals, read through boxes of court documents and crossed the state to interview more than 100 legal experts, advocates and criminal defendants.

The numbers, as always, are clear – the reason behind those numbers are in question.  One obvious possibility is that the vast majority of sentences are imposed by plea agreement, and the judges are simply signing off on them.  Therefore, some argue, “the racial onus would lie elsewhere, such as the prosecutors (who presumably make worse offers to black defendants, whether consciously or unconsciously) or defense attorney (who presumably aren’t fighting as hard for black defendants, whether consciously or unconsciously).”

However, Tom Lyons, one of the reporters pushed back in a follow-up article, argued, “No matter how much weight that plea deal explanation carries, it is still no excuse for the judges, for several reasons. The big reason: Judges aren’t forced to accept negotiated deals. Yet some strongly tend to – and rarely reject one. Others are known for balking, as they are supposed to when they see cause.”

The New York Times adds, “Prosecutors and defense lawyers have come to accept this racist system as a fact of life. The Herald-Tribune cited two teenagers who were charged with armed robbery in the same county. Prosecutors and the defense lawyer, with the approval of one judge, ignored the sentencing guidelines for the white teenager and struck a plea agreement for probation with no jail time. The black teenager was sentenced to four years, as recommended under the guidelines, and was told by his lawyer that it was the best deal he could get.”

Problem: Police Shoot and Kill 1000 Times a Year, What Can Be Done If Few Are Prosecuted?

Philip Matthew Stinson,  an associate professor of criminal justice at Bowling Green State University in Ohio, in a recent op-ed pondered the problem of the Walter Scott case, where the officer, Michael Slager, was shown on video having shot Walter Scott in the back.  “Yet after watching the video many times, a jury was unable to reach a verdict in the officer’s recent murder trial.”

“This is a story that has become all too familiar,” Professor Stinson writes.

He notes that he has tracked a lot of these incidents, estimating about 1000 times each year an on-duty police officer shoots and kills someone.  “Almost all the cases end with a determination by a prosecutor that the police shooting was legally justified. Since 2005, only 78 police officers across the country have been charged with murder or manslaughter resulting from an on-duty shooting. “

Of those, he writes, “just 26 of those officers have been convicted of manslaughter or a lesser offense, and only one was convicted of murder.”

That one case, “It was an extraordinary situation: James Ashby, a police officer in Rocky Ford, Colo., saw a man skateboarding on a highway, followed the man into his home, shot him in the back in front of his mother, and then pepper-sprayed him as he lay dying. Ashby was convicted of second-degree murder.”

He writes, “Jurors’ unwillingness to convict police officers may seem baffling — if not infuriating. But it’s not difficult to understand their reluctance. They don’t want to second-guess the split-second life-or-death decisions of a police officer who used deadly force. They understand that policing is violent and that sometimes police officers have to use their guns. Some jurors don’t believe a police officer could be a murderer. It is also possible that jurors are afraid to find a police officer guilty, because they think his or her colleagues might retaliate against them.”

Professor Stinson noted that there is an uptick in the prosecution of police officers recently.  He attributes them to “the growing ubiquity of video recordings; indeed, there was video of at least part of the incident in 17 of those cases.”

Even then, “prosecutors have struggled to get convictions.”

He notes, “If videos don’t change the game entirely, they’re certainly better than nothing. Before smartphones made it easier for citizens to record possible malfeasance, the police owned the narrative. There weren’t opposing narratives because a dead man can’t talk. “

He noted, “Videos have opened a window into police behavior rarely viewed by the public. Sometimes bad cops defy their training. Sometimes they plant evidence to cover up their crimes. Sometimes they give false statements or write false reports. All of these things happened with Michael Slager: He didn’t do what he was trained to do, he planted evidence — a Taser — and then he lied about it when questioned by investigators.”

And they still couldn’t convict him.

Professor Stinson comes to the same conclusion I have: “State and local officials should appoint special prosecutors from private practice to investigate shootings and take police officers to court whenever appropriate.”

In the meantime, “Americans should video all of their street encounters with police whenever possible — with the understanding that recordings are hardly a panacea, just the best tool we have available.”

Share:
Tags:Achievement GapPolice ShootingsRace
Previous : Commentary: An Eye Opener on Housing
Next : Did WikiLeaks Act Appropriately During the Election?

One thought on “Justice Watch: Race in the Criminal Justice System”